This letter from Frank Harris was originally advertised as relating to My Secret Life. I was excited, as any writing by Harris on that subject would have been uniquely valuable and interesting. As it turns out, of course, the letter is about My Life and Loves, but I am still pleased to have acquired it.

It reads (click on the image for a larger view): 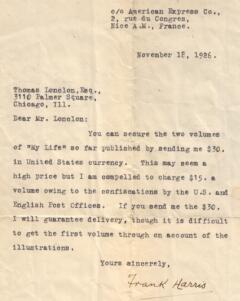 You can secure the two volumes of "My Life" so far published by sending me $30. in United States currency. This may seem a high price to pay but I am compelled to charge $15. a volume owing to the confiscations by the U.S. and English Post Offices. If you send me the $30 I will guarantee delivery, though it is difficult to get the first volume through on account of the illustrations.

The 'illustrations' referred to were the photographs of female nudes that Harris illadvisedly included in Volume I, thereby attracting the interest of the French Customs, who would probably otherwise have paid no attention to his book, however salacious its written content. Images of naked women are hard to slip past even the most ignorant monolingual bureaucrat.

The 'high price' was due to Harris having to engage various people to smuggle his books into the U.S. Sometimes they were caught; sometimes they sold the books but omitted to send the money back to Harris.

The surname "Lonclon" is uncommon to the point of being unknown. A plausible explanation is that Harris mis-read his handwriting and his name was actually Thomas London. A quick online search located a Thomas London of Illinois who was born in 1898 and died in 1988. My current working assumption is that this is the same man, although he died in Arizona and I bought the letter from a bookshop in New York State.

All about the writer and editor Frank Harris.