And Now Its Nail Time

Author(s):
Kenneth B Shaw
Publisher:
The Author
Edition / Year:
1971
File under:
watch out for the bees apostrophe abuse
In the section labelled:
Remainder Pile 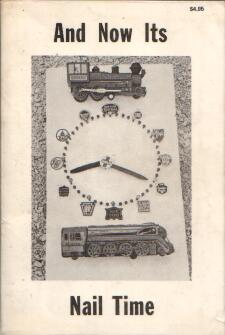 If you publish a book yourself, you can have it just the way you want: you can, for instance, give it a cack-handed title, with an apostrophe missing; you can put a really corny photograph on the cover; and you can include a badly executed drawing of yourself opposite the copyright page, as if it were a personal memoir rather than being about collecting railroad nails.

Books like this one are rarely read outside the small number of people interested in the subject, which I think is a pity. There is a poetry to be found in very dull matters, often enhanced by the peculiar tics of those who chose to write about them. Shaw, for example, brings a tantalising obscurity to his argument:

About letter nails and what they mean. Some railroads never used them, others used a lot of them. Although it is quite possible that they did not have the same meaning for each railroad - it is most unlikely. And right here it is time to remember one things about all nails in general. In some cases in the old days, they were placed into the tie by some of the most uneducated of people. Nearly every railroad used cheap labor. Most were immigrants who couldn't read, write or even speak our language. The lowly trackman whose sole duty was to maintain these many miles of track, was known as a “Gandy Dancer” and the track foreman was called “King Snipe”. In Canada the term “Bohunk” is common amongst “foreign” railroad laborers.

Out of Texas comes the “story” of a railroad which began using nails in 1901 - but instead of 1 or 01 they used letters A=1, B=2, C=3, etc. throughout the alphabet. But they ceased this in 1924 (if indeed they were started) for there are “25” nails in great abundance, and oddly enough no letters! But because this hearsay information continued to crop up from time to time, it's worthy of note and who knows, it may prove to be true. 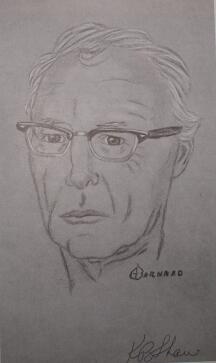 Nails, of course, have a value, and one of the functions of this book is to provide guide prices. But Shaw sounds a warning note:

On pricing here is the absolute end to all guess work. Like any commodity, the price is based on two things primarily. Supply and demand. As one moves in any direction so does the other. In the past six months, we have consulted with some of the best minds in the hobby and have come up with remarkably close estimates to use as guidelines and using Santa Fe nails as a base. For it is these nails that bear the brunt of all the “Traffic”, But because of this (before the ink is dry) the prices may also be wrong. Some of us may never own all of these romantic nails for the prices change faster than the Dow Jones averages. I refer to the I round indent, the diamond 4 and the elusive 56 pentagon. It is debatable whether it is even wise to include a price guide, for that is all it can ever be. By the time the book is printed they may be changed so unless this is taken into consideration, it would be wiser not to even use these prices except as a guide.

Sage advice, which, if I ever take up collecting nails - be they railroad, nine-inch or finger - I intend to follow unquestioningly, when I can understand it. 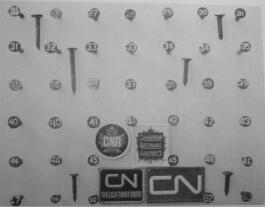 Finally, remember that your new hobby has certain perils to watch for, when you are walking the tracks hunting for treasure:

There is another hazzard [sic] often not seen until too late and this is bees. There are many kinds but they all have one thing in common, they STING.

Google the Texas Date Nail Association. This si where there would be more people who might be interested. Think of the stories one of these nails could tell if only it couls talk. Some of these had a long, long time of service during the steam locomotive era. Of course their view of the world around them would have been somewhat limited by the two rails on either side of them :^))
Submitted by Dan R. (not verified) on 25 Nov 2009 - 00:04 Permalink

I live in this mans old

Our Library would love to

Our Library would love to purchase a copy of this. Please advise via e-mail.

Dude, how much you asking

Dan, I hope you profit by

Dan, I hope you profit by his wise advice: "On pricing here is the absolute end to all guess work. Like any commodity, the price is based on two things primarily. Supply and demand. As one moves in any direction so does the other."

You have the supply, but I suspect the demand is minimal.