Here we have a very weird book indeed. Comb-bound in a cheap imitation leather cover - like the manual for an ancient tape recorder - is a baffling and apparently nonsensical text. Whoever the mysterious “Wm. Carterator C.” was, either he was a talented beat poet who disguised his work as the ramblings of a crazy person, or he was a crazy person. I favour the latter. Here's his prefatory statement, a sort of manifesto:

The author of Atomic's Bible, a book of statements for the Atomic Age, has written this remarkable volume without the customary rewriting and revisions. Even the spelling is his own. Many of his words are not in any dictionary. He has wished it that way.

The book is printed just as the inspiration came to him. He makes no pretension of learning in the accepted sense. Its vision is sometimes beyond the human brain.

He has fled the teachings of preachers and priests, professors and doctors, realizing their errors and misconceptions of the past.

His revelations are thus uncontaminated by academic thought of this or any age. In its pages, he feels are things not hitherto revealed to mankind. In a world of doubt and uncertainty, he humbly offers this contribution that peoples of the Atomic Age may find light. Be not quick to condemn, but read the entire work that you may share the thought adventure of the author.

The Atomic's Bible speaks for itself without apology. Its author is a man of burning sincerity. He has ever sought to follow, stumble though he may, the words of the Nazarene when he said, “Seek ye the truth and the truth shall make ye free.”

That it is “uncontaminated by academic thought” and often “beyond the human brain” is very much the case. As he says, it consists of a series of “statements” - almost all very strange - about science, economics, history and religion. Here is a selected sample which shows their curious qualities:

Scientists knew there were some things circling around the center or mass, composed of the three structures, but named it electrons. The electrons belong in the mass and what circles around the nuclear or mass are the two representatives of each element carrying that material of life; black, white, colors, soft, pliable, hard, hot, and cold, etc.

When characters resemble each other, or show likeness, there can be no harm in comparing the atoms with a swarm of bees. You can see the same pattern, and the fourth structure. In a swarm of bees there are the King, the Queen, and the Drone, which makes up the mass or nuclear [sic]; the working bees (or the representative) fly around creating magnetism or capillary attraction, which carries them to a new home.

You can take an acorn apart and see two of its structive [sic] components, the hull and the kernel. You know there are the three components in all, the third being the life-giving image of the kind of oak that acorn will grow. Then that image has to come from the atom, so we shall study the atom parts and find the life-giving image within the atom.

So life constructions are by the images carried in the atoms. Now we have shown that the atom does carry an image of the life which disintegrated to elements and then to atoms. Now to make an image in the atom there would have to be life, energy, and material; now the atom from the hottest elements, radium or uranium must make life, fire and electricity. The atom from the coldest elements when stored together makes dry ice. Other atoms construct the colors, etc.

The Powerment [some kind of global conspiracy, like The Illuminati] as master minds were teachers and taught all how they were saved from slavery till they set up “Christian Religion,” and by the 10th Century the world was enslaved for the second time. This continued till the 14th Century, when life became so unbearable by favoritism to the weaker sex, that the people again took sticks and stones and fought a two-hundred-year war to become free again.

During this war ingenuity began to be recognized, and prophets' versions were noted. In the midst of this war the Western Hemisphere was sought; as Jews were persecuted, some of them with followers set out and did set up the New England States. As they came from England, England claimed this colony. The Jews that came were financiers and not teachers of faiths.

Leif Ericson first came to the Western Hemisphere and was destroyed by Indians; Amerigo Vespucci, a Malay, named America; Columbus messed it up with the slave traffic.

A thrill to the feminine sex is better hunting for a husband, than having one. Many a wife, not having the brass to sue for a divorce, or if she is in a state where she cannot produce grounds for one, soon becomes habitual to reading those divorce novels which harden her affections, and her love is cold.

She becomes quarrelsome and irritable. This causes the husband's sexual brain cell which operated the sexual nerves to cease supplying the feed for the semen germ. These germs have to be fed, or delivered.

When the husband hasn't the ability or grit to find other love or affectionate care, he soon is attacked; without food these germs feed on the wall of the prostate, causing the prostate to swell and cut off the urine, and when he calls the doctor you see there is no medicine he has to give or any operation he can perform, except one which is illegal.

There is no operation or medicine available that will correct this sure death which averages six months when given medical care. Millions of aged men die from this cause, which is not mentioned or begged for.

Cycles of war, the present Cold War is fifty years, beginning in 1902. In 1916 when the legal forces tore up moral segregation this was the last blow to the old man. This also started the masculine gender looking publicly for prostitutes. This caused many laws to be passed, bringing in fines for acts of immorality, immoral conduct, the Mann act, the white slavery law.

On the workings of the brain:

Regardless of the severity of the impact, the recollection becomes eradicated within three years if not rehearsed. But if rehearsed so as to be sustained, then the sense becomes inset, and so on until the fixing reaches insanity, which cannot be eradicated.

These examples are typical of the delightful battiness to be found throughout. It is a gem of oddball writing. As a final treat, I leave you with this charming picture found opposite the title page, illustrating a no doubt important (yet never explained) festival, “Cult's Day”. 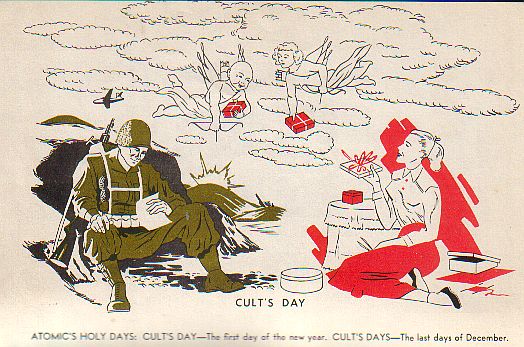 I WANT this book! Where can

Hi Meg, it's very hard to

Hi Meg, it's very hard to find, I'm afraid. I am the only person I know to have a copy. The Library of Congress does not have one and there are none listed on Worldcat. I found mine by chance on ebay, didn't know what it was but it certainly sounded odd so I bid for it.

I HAVE A COPY BECAUSE IT WAS

I HAVE A COPY BECAUSE IT WAS MY GREAT GRANDFATHER...WHO INVENTED MANY THINGS.

I would love to read this but

I would love to read this but there are no copies available. Could you possibly take pictures of its pages and upload them or send them to me?

Hi Blanche, as it happens I

Hi Blanche, as it happens I do have scans of the book which I may put together into an e-book at some point. Don't hold your breath, though as I am quite busy with other stuff at the moment.

Hello. Do you still have your

Hello. Do you still have your copy? Do you have a brother named Joseph?

Ah well....I am putting out a search. As a poet...this is an inspirational little booklet....the guy was somehow a genius. Peace
Submitted by JAMES RALSTON (not verified) on 15 Jan 2011 - 15:23 Permalink

please send me this book

Hi, did you ever scan the

Hi, did you ever scan the pages? Just found out this is one of my Great Father’s book.

Hi Jess, yes, I do have a scan of the book. As I have your email I'll send more details direct. Just commenting here so others know.