The Cause and Control of Sex in Human Offspring

Another author on this site discusses the question Why Jesus Was a Man and Not a Woman. R. Clay Jackson addresses a more general problem, that of how the sex of children not sired supernaturally is determined. His answer: it's the weather, or - more specifically - sunshine.

The idea suggested itself that if either the male or the female germ came excessively under the influence of sunlight the result would be to lessen the potency of that germ. And if, simultaneously, one sex germ suffered an excess exposure to sunlight and the other sex germ enjoyed the benefit of a measure of protection from sunlight, the resultant sex of the child to be would favor the sex of the parent who had the most protection.

In other words, if a man spends more time outdoors than his wife, their children are more likely to be girls, and if the reverse is true, they are more likely to be boys. If this were true, it ought to be a relatively easy thesis to prove. However, since it isn't, Jackson has a struggle to make the facts fit.

Above is the first of many diagrams which he uses to demonstrate the link between sunshine and sex. The relationship between the curves for cloudiness and male/female ratios seems far from obvious, and the time between the weather recording and the birth data is twelve months rather than the seemingly more logical one of nine. Indeed, he admits that he was puzzled that sometimes the lag between cause and effect is as long as fourteen months, sometimes as short as nine. This lag he rather vaguely explains as probably due to the effect of the sunlight propagating slowly through the body, taking an average of three months to arrive at the sex cells.

If this were the explanation, one would expect large population statistics to show a lag value close to the mean, not to vary wildly. But as the lag is purely an artefact of Jackson's looking for correlations that don't exist, this variation is perfectly natural.

Statistics, in Jackson's view, must only confirm his theory and cannot possibly contradict it. If the data doesn't look quite right, there's always some deeper explanation. So, when the sunshine curve goes the wrong way, there's rainfall to be considered. And if that's still not helpful, there must be some other factor involved, even if he doesn't always know exactly what it is. Maybe it's racial, or something to do with employment rates.

In his search for this deeper, ever elusive, truth, he discovers that brunettes and blondes are affected differently by the weather. Not only that but amongst illegitimate children there are more blondes than in the population as a whole - though what this supposed fact has to do with his main argument is unclear. Maybe it's just blondes having (or being) more fun?

Never mind that, though, have a picture of a baby. Ahh! 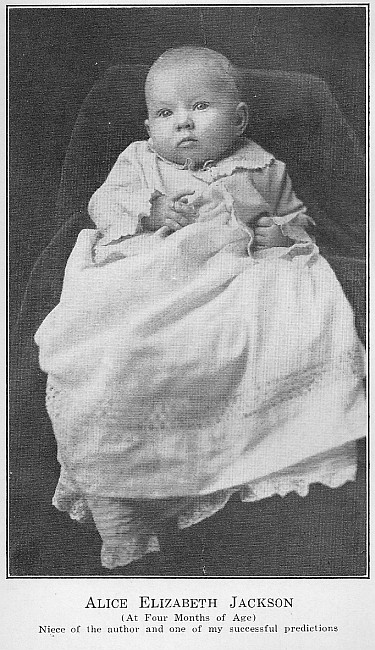 For even more egregious statistical abuse, see Crime and the Man.

Alfred, how much utter trash

Alfred, how much utter trash do you look at before you find a treasure like this book?
Submitted by Alfred Armstrong on 30 Apr 2011 - 23:28 Permalink

Good question. Hundreds if not thousands of titles at a guess. What a waste!

That baby grew up to be a serial killer. Also, there is no difference between this nonsense and astrology. Yeesh. We human beings seek patterns compulsively even where there's not even a hint of one. I guess we should be glad for that, since it's the basis of scientific inquiry, but still...
Submitted by FrancoisTremblay (not verified) on 30 Apr 2011 - 21:17 Permalink

Geeze. Sorry for the double

That baby grew up to be a serial killer. Also, there is no difference between this nonsense and astrology. Yeesh. We human beings seek patterns compulsively even where there's not even a hint of one. I guess we should be glad for that, since it's the basis of scientific inquiry, but still...
All comments