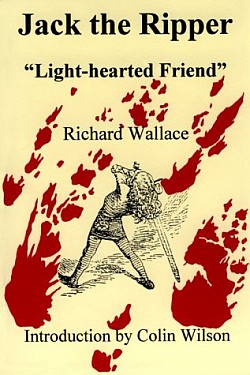 From The Adventures of Alice in Nonsequiturland.

'I daresay you haven't had much practice,' said the Queen. 'When I was your age, I always did it for half-an-hour a day. Why, sometimes I've believed as many as six impossible things before breakfast. But this is nothing. I am sure you know Wallace and Wilson."

Alice considered. 'No, I don't think that I do'.

'You don't think very much at all!', said the Queen rudely. 'Wallace believes that Lewis Carroll was Jack the Ripper, and Wilson has had so much practice in believing things that he almost believes it too.'

'How surprising!' Alice riposted. 'Wallace must have found new evidence to link Carroll to the murders, I suppose?'

The Queen adopted an air of superiority. 'In the anagram is the evidence. And that is an anagram of "I, a threatening sham, need vice", you know. Murderers always confess their crimes through hidden anagrams, it's a well-known fact.'

'I've never heard such a silly idea in my life', Alice responded, 'Why would they do that?'

'You may ask Wallace yourself, my dear. Here he comes now, disputing with Wilson as usual.'

Two serious-looking men, whom Alice assumed were Wallace and Wilson, came strolling up to them, each gently elbowing the other in the ribs as they walked.

'Wallace!' announced one, putting forward his hand for Alice to shake. 'My theory is -'

'Mistaken, though plausible', interrupted the other, adding, 'Wilson! I incline to the view that the Ripper was -'.

'A nobody, whereas I have shown that it was Lewis Carroll who committed these crimes, beyond doubt.'

'You must be very clever, Mr Wallace', said Alice, 'to have found such a thing out.'

Wallace looked pleased. 'How perceptive of you! I am very clever indeed. Today I am a psychotherapist, but yesterday I was a systems analyst and computer programmer. Psychotherapist is an anagram of "Chastise Thy Pop", you know.'

'This is my method', said Wallace, condescendingly. 'An anagram may be correct, or it may not. The question is, which is to be master - that's all.'

'You seem very clever at explaining words, Sir,' said Alice. 'Would you kindly tell me the meaning of the poem called "Jabberwocky"?'

'Let's hear it,' said Wallace. 'I can explain all the poems that were ever invented—and a good many that haven't been invented just yet.'

This sounded very hopeful, so Alice repeated the first verse:

'Twas brillig, and the slithy toves

Did gyre and gimble in the wabe;

All mimsy were the borogoves,

And the mome raths outgrabe.

Bet I beat my glands til,

With hand-sword I slay the evil gender.

'Well, horrible is as horrible does', said Wallace. 'You don't get more vile than a psychopathic repressed homosexual who commits a series of vicious murders of women because of the suppressed rage engendered by his tortured childhood, do you?'

'I suppose not.', said Alice, 'but that doesn't sound at all like the Lewis Carroll who authored me. If he'd have made anagrams, they would have been good ones, and yours are all rotten.'

'Dear child, my insights into him are unique', cooed Wallace, placidly. 'Let me whisper you a secret.'

Doubtfully, Alice stood on tiptoe to permit him to approach her ear.

I'm sure someone else said that in another book, she thought to herself, pushing him away. He was surprisingly light, and tumbled to the ground, where he broke into several pieces. Likewise, Wilson and the Queen shrank down, smaller and smaller until they too were just little pieces of broken china.

'Why, you're nothing but a pack of old cracked pots!', she exclaimed - and with that she awoke and found herself lying on the bank, with her head in the lap of her sister, who was gently brushing away some dead leaves that had fluttered down from the trees upon her face.

'Oh, I've had such a preposterous dream!' said Alice, and she told her sister, as well as she could remember them, all these strange Adventures of hers that you have just been reading about; and when she had finished, her sister kissed her, and said, 'It was a preposterous dream, dear, certainly: but now run in to your tea; it's getting late.' So Alice got up and ran off, thinking while she ran, as well she might, what a very disturbing dream it had been.

(With many sincere apologies to Lewis Carroll - AA).

Great Lewis Carroll pastiche! I would actually like to have this for my Silly Book collection - but would I have to get another copy for the Alice collection? I never heard of Wallace, but have other books by Colin Wilson.

Thanks, Ned. He wrote two

Thanks, Ned. He wrote two Carroll books, the first of which also relies on anagrams as evidence. This one is the loonier of the two.

Is it enjoyable loony or

Is it enjoyable loony or boring loony? The fact that you wrote this wonderful pastiche instead of snarking on the contents suggests the latter, but I'm still tempted to buy a copy.

It shuttles between what

It shuttles between what appears to be fairly serious research and the crazy stuff. I found it somewhat annoying, actually, like all the Ripper books that point the finger at some prominent figure, especially when it's someone of cultural importance like Carroll or Sickert. Has there ever actually been a serial sex killer who had any notable talent of any kind? I don't think so, yet these nitwits keep trying to find evidence that the Ripper was the exception. Why?