Moles and Their Meaning 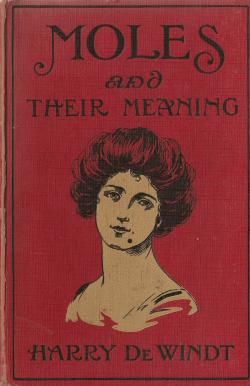 This little book is something of a classic of its kind. It first came to my notice through Ash and Lake's Bizarre Books (1985, 1998), an admirable publication which I strongly recommend, though its authors take a fairly light-hearted approach to their material, eschewing any more profound analysis such as that universally applied here.

Harry De Windt had previously written a number of works of travel and adventure, including Finland as it is, From Pekin to Calais by Land and Through Savage Europe. This, though, seems to be his only venture into the field of divination and he brings to it an unusual sensibility. Although this is a cheap little volume (original price 1/6), uniform with such dispensable items as Pearson's Dream Book and Hands and How to Read Them, De Windt strikes a scholarly pose, invoking the ancient physiognomists Richard Sanders (1613-1687?) and Johann Kaspar Lavater (1741-1801) in support of the seriousness of his work.

Silly ideas are made no less silly because some gentlemen long deceased once wrote books about them. Be that as it may, the essential concept presented here is that:

... every mole upon the face of man or woman has upon some other portion of the body a corresponding birthmark, the position of which can generally be located with startling accuracy.

Sanders, whom De Windt quotes in a prefatory note, put the same idea more quaintly - if not convincingly:

Nature doth represent the merchant, who having stored his shoppe with all sorts of ware, finds it inconvenient to bring it all to the open window to be seen, (it being indeed impossible) but exposeth to the open view, some small quantity of everything by which may be judged what is within. Thus from the moles in the face, (as in a compendium or index to the whole volume of the body,) we find the other moles of the body, and derive a certain judgment therefrom. 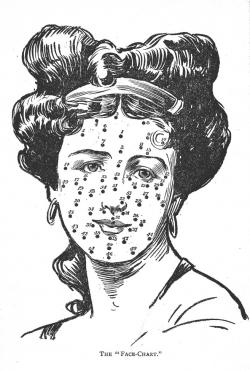 (Weird punctuation uncorrected). So in fact it is not the moles on the face that have a meaning, it is those other moles somewhere else, usually covered by one's clothing and hence not available for inspection, that are significant. The facial ones simply tell the informed “moleosopher” where the meaningful ones are lurking, so they can be interpreted. If this were not enough, then any doubts as to the worth of De Windt's thesis are dispelled by the prognostications he gives for each possible position for a mole, using the numbering system presented on his “face chart”, as in this very typical example:

Honey-coloured: “A man of singular good wit, happy in getting goods. It promiseth inheritance, the favour of superiors and the like.”
Black: Peril of a fatal but lingering malady connected with the stomach and liver, which will only be averted by great care in diet.

A frail, delicate constitution. Some peril connected with childbirth. “Take notice in this type of one secret I glean from Baptista Portae's 'Natural Magick.' If she be corrupt, the grissel at the end of the nose is cut, as it were, or separated from the bone.” Let such an one wear light blue gems and take heed of the fourth day of the month of her birth.
Astral domination: Saturn and Mars.

You will notice that, as De Windt explains, “in women the colour of a mole has no significance, but in the opposite sex it must be closely studied in diagnosing the character and future” - which is rightly in keeping with the arbitrariness and irrationality of the work as a whole.

To avoid any suspicion of prejudice, though, let us put De Windt to the test. Until it was removed by surgery the singer Enrique Iglesias had a mole on his right cheek, near to his nose. What did it say about him? The mole was “honey-coloured” rather than black, and it appeared at position 54 in the face chart. Here's what De Windt says about such a case:

Denotes misfortune, but only at an advanced age. Youth and middle age shall be peaceful and prosperous. This sign is specially favourable to the knowledge of secret and occult things - a marvellous and intuitive reader of human character.

Its “presumptive sister-mark” is this time “under the left armpit”. I can't find a picture that shows that area of Signor Iglesias and anyway he might have had that mole removed, too. (Damn these modern advances, that make divinatory work so tricky!) Still, I think you'll agree that De Windt's assertion that Enrique is “prosperous” is accurate, even, one might say, “spot on”!

Finally. whether you believe in De Windt's method or not, I think we should all make a point in future - just in case - to inform every woman we meet who has a mole at the corner of her left eye, that, while we are aware that she is “incapable of fidelity”, she should still take care to “beware of the lightning”, as the book says. (Good advice is always welcomed, isn't it?)

I have a mole on the left

I have a mole on the left side of the nose under the left eye but it's not exactly under the eye there is some distance. What does it mean?

What is the indicate 21 no

What is the indicate 21 no Mole?

I have a mole in the middle

I have a mole in the middle finger left hand...Wat does it.mean.?

I have a very small mole.

mm. hello. i have a question

mm. hello. i have a question if big bear star moles on right hand means something? :D

black-brown mole at the base

black-brown mole at the base of third phalange of right hand middle finger...what does it mean?

I am a girl, i have point

I am a girl, i have point size mole on left upper arm, not on the elbow, will this means , i will become widow? Please tell me

I have a mole on my left eye

sir i have a black dot on

sir i have a black dot on the shaft of my penis i have heard that dot on penis indicates sex with multiple women and also he will be addicted to sex and i always want to have sex? it is true or not

Sir this is ramu... I am a male candidate...I have a medium size light red colored mole on my thigh....what it tells