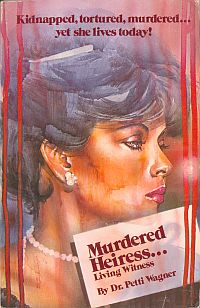 Wagner's account of her kidnapping and miraculous escape is a sort of fairy story for the soft of head.

Born into a wealthy family, she became a successful businesswoman in her own right with her Herbagere hydroponics and Menotti permanent wave products. In 1971, though, her life was changed utterly as she underwent the terrible ordeal which is the central subject of this book.

After receiving a message indicating that a beloved aunt had fallen ill, Wagner hurried to a local private hospital, where in an apparently unused ward she found herself at the mercy of a gang of vicious kidnappers:

... my head exploded as his massive fist smacked my left temple. Another strike slung me onto the hard floor and I crumpled on the far side of the bed.

Everything began unfolding like a sickening slow motion sequence. With my ears ringing and my consciousness already blurring, I lifted my head just as Sidekick's boot swung, knocking me against the wooden floor once more.

This level of violence seems rather over the top, especially given that the cunning plan against her requires that Wagner's eventual death by electrocution is to be certified - by a doctor in on the plot - as due to a heart attack. The bootmarks, bruises and broken teeth would look so suspicious at any post-mortem that they might as well have shot her up with a machine gun and saved themselves a lot of trouble. While she yet lived, however, the sadistic thugs had further indignities to inflict:

Not long before dark, Roger, the orderly who sometimes brought me food, came into my room with a curly black wig which was stretched over a Styrofoam wig head. I was totally perplexed.

She's not the only one perplexed. The orderly attempted to provide an explanation:

Dr. Holmes? Not THE Dr. Ronald Holmes - the most notorious psychiatrist in Texas?

No, not THE Dr. Ronald Holmes, actually, since as the copyright page tells us, “Dr. Ronald Holmes is a fictitious epithet”. The purpose of the wig, and why the gang could not have put it on after they had killed her, are mysteries that remain unexplained.

The devilish crooks wired Wagner up to a set of electrodes and passed 240 volts through her, a figure which they gloatingly repeated as though it were something exceptional. However, a mere 240 volts is quite enough to kill someone, so we must surely believe her when she says that she found herself in the next world:

Even though I seemed to be walking on billowing white ether, there was a firmness under my feet as I moved. Overhead was the most blue-hued sky I had ever seen. Every color, every sense, was magnified innumerable times. A brilliantly lit magnetic force propelled me without any effort on my part.

Thoughts assaulted my mind, as if my brain had become a silent, drawing sponge. Even without a mirror, I realized that I was young again - beautiful, unwrinkled, with my hair raven-colored and floating around me in the heavenly atmosphere. I felt twenty again - young, uninhibited, wearing a deep purple robe.

Up in heaven, she met Jesus, who, just like his pictures, has a “beard and soft, brown curly hair”. He told her she can choose whether to stay in heaven or go back, and she, considering her “work on Earth is not done”, decided to return. Maybe she felt the world needed a new type of cold perm, or something.

Back on Earth her guards were understandably surprised to find her alive again, after THE Dr. Ronald Holmes had certified her dead, but instead of sensibly making sure they finish the job they left her alone so she could escape, just like in all those bad films. But Wagner, unlike James Bond, did not have to rely on her own strength and ingenuity alone. She had the advantage of an exceptional accomplice:

“I am the Lord your God,” he said. “I am here to help you, not to hurt you. Do not be afraid. Keep a spoon tonight when they bring your supper tray, and I will help you escape.”

Under instruction from Jesus, Wagner used the spoon as a screwdriver and removed one of the windows. Before she can escape however, God had another, weirder instruction.

“I want you to pray for David,” He said. “At this moment, the engines of his plane are stopping in the middle of the sky.”

David, it turns out, is the mastermind behind Wagner's abduction. God was punishing him by causing his plane to crash but Wagner had to do her bit and get some prayer in. It seems monstrous to me that God should insist that Wagner ask Him to forgive someone whose fate has already been determined, though I'm no theologian. But it is not only David for whom Wagner had to perform this arguably redundant ritual:

“... George!”, the Holy Spirit affirmed. “At this very moment, his car is on Highway 10, just a few miles from here, travelling ninety miles an hour and crashing into the back of a flatbed truck!”

With the Lord as her almighty minder, Wagner escaped and made her way to safety. She then discovered that a number of people she had trusted had conspired against her to rip off the assets of her company. Bafflingly, though, no criminal charges seem to have been brought against those responsible: instead she pursued a number of successful civil cases including a major suit against the hospital where she was held against her will.

This case she claims was adjudicated on the 6th March 1974, in the Harris County District Court, and she reproduces a document relating to it, with certain details obscured such as the full name of the hospital. Curiously, when I searched the court records online at idocket.com I was unable to locate it, and - perhaps even more oddly, considering the newsworthy nature of the entire bizarre story - so far I have not been able to find any online resource that mentions it, at all. Perhaps there has been some sort of conspiratorial cover-up. One would not want to doubt the word of someone who claims to get instructions directly from God.

Marvellously, through the wonder of the Internet, it is possible to hear Petti Wagner talking about her all this, complete with evocative musical accompaniment. Hallelujah!

How can I get a copy of this…

How can I get a copy of this book please?

Dr. Wagner was or is a beautiful soul. I haven't seen her in many many years but I wonder how she is doing and if she lived to be 100. Her story is believable. She is an amazing human being and I truly love and respect her. If there is any way would you please let me know how she's doing?

read this book years ago and…

Met the lady years ago

Met the lady years ago working on a television program she was on to talk about her book and her experience. She is a real person and the account is true. I still have the book. She passed away in 1990. https://www.findagrave.com/memorial/144820644/olive-wagner

Not that it makes a lot of

Not that it makes a lot of difference but Petti was not descended from the Peet Soap family. She was descended from John Peet who arrived in the "New World" in 1635 from Duffield, Derbyshire, England. Daisy Olive "Petti" Peet was born in Alden, Hardin County, Iowa on October 30, 1915

I just finished this book and

I just finished this book and loved it. Check it out. This lady truly knew Jesus.

I believe that this book is a

I believe that this book is a mixture of fact and fiction. Petti Wagner was certainly a real person, and she had some businesses and some of the events may have happened, but some fundamental aspects of the story are clearly untrue:

1) There was no honorary degree from University of Florida. The wording is inconsistent with academic usage, and there is no honorary degree listed for Petti Wagner here: http://fora.aa.ufl.edu/docs//21//Honorary%20Degrees.pdf. (which is a complete list of all honorary degrees going back to 1909).
2) Artesia Hall scandal. This didn't happen until May 1971, and was not publicly known until June 1973, yet the book implies that "Dr Holmes" was already notorious at the time of the book's events in March 1971.
3) The death certificate in the book is a blatant forgery. It does not use a 1971 format, on form 25c. Instead it is on a form 27c, which is the form available when the book was published. This is easy to validate by searching the Internet for real Texas death certificates from 1971.
4) The letter from Department of Justice is undated and is missing a document reference, which must be included on all US government letters. If not an outright forgery, important information is redacted.
5) The plane crash was on the wrong date. The book says that "David" was killed in a plane crash at 1:00am on 19 March 1971. The actual crash was on 28 March 1971 at 7:09pm and this was the only matching crash in Texas during March. This can be validated at: http://www.ntsb.gov/_layouts/ntsb.aviation/index.aspx Other details match the book, such as the cause of the crash, the location of the crash, and the involvement with "David" in a health club. However, the health club (President and First Lady Health Spa) was not a listed company, which contradicts the book's assertion that he was involved in a stock pump and dump scheme.

These issues are not minor and go to the heart of the story, especially with the plane crash, since the book said that Petti Wagner had to pray for "David" as his plane was crashing down.
The hospital did have a lawsuit by Petti Wagner, and was called Rosewood General Hospital. It has been closed since 2000.

More info of her and her

More info of her and her children:https://www.myheritage.fi/research/collection-90100/kooste-julkaistuist…

Google Daisy Olive Peet. You find information of her father's company, I did extensive search years ago, since I liked the book and wanted to know what company was she heiress of. It was Golgate-Palmolive. Wikipedia: In 1928, Palmolive-Peet bought the Colgate Company to create the Colgate-Palmolive-Peet Company. In 1953 "Peet" was dropped from the title, ...
It's a real story. they have a family information here well documented: http://search.ancestry.com/cgi-bin/sse.dll?gl=ROOT_CATEGORY&rank=1&new=…
I am actually interested what happened to the son, who was part of this what they did to her? I mean how can you get away with murder? Well, not my business.

I went to church with this

I went to church with this lady who this happened to in Houston. It is all true. The hospital was I believe on Westheimer and was called Rosewood. Don't know if it is still there. She loved the Lord very much. The church was called Lakewood.