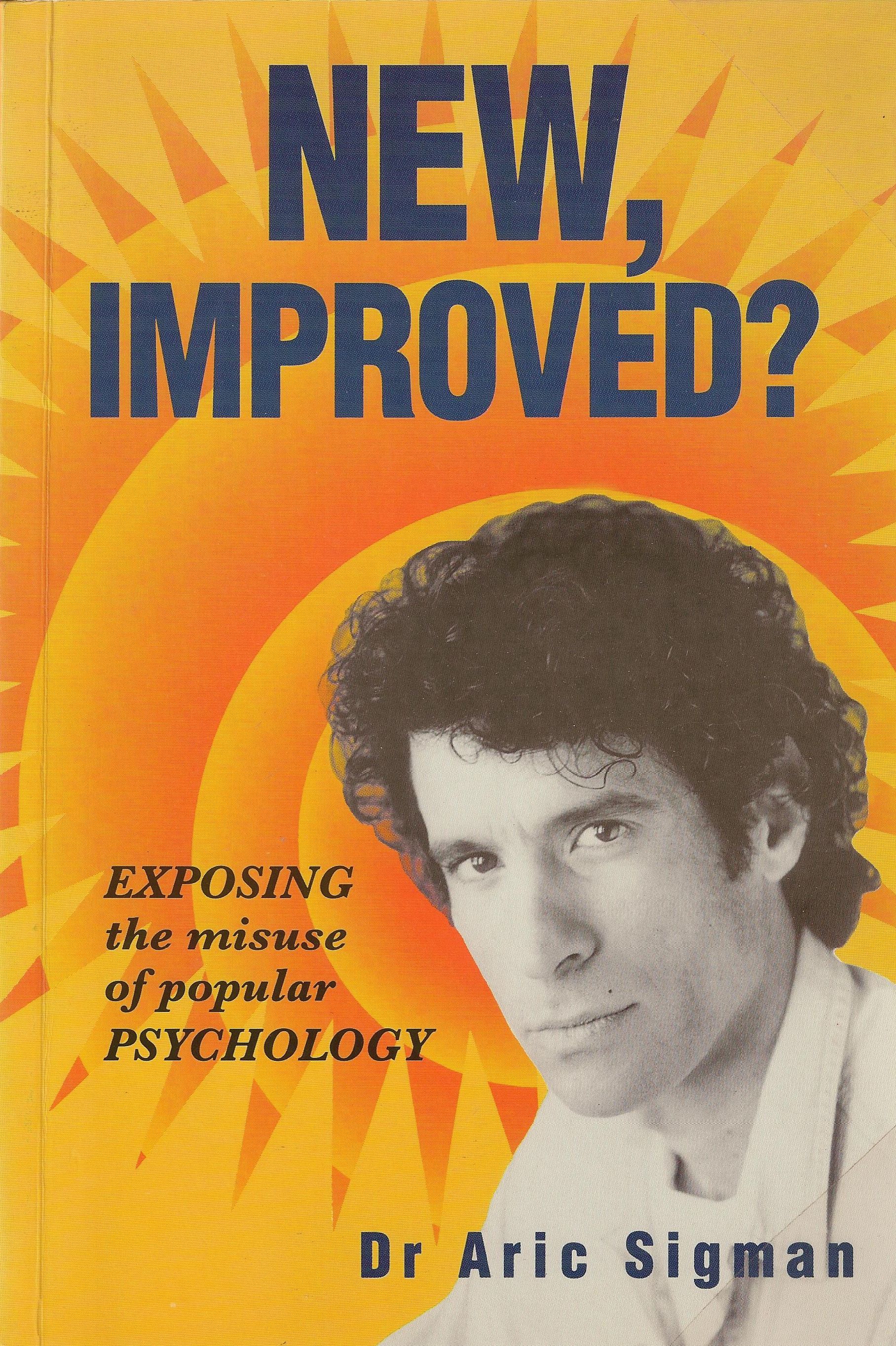 Erroneous ideas [...] about how people should feel, behave and love, have become deeply ingrained in our culture from the Arts and entertainment, through the major institutions involved from marriage guidance, to safer sex, to corporate policies, to government policies, to 'civil rights' psychology.

Thus opens the blurb to Aric Sigman's "neither gentle nor diplomatic" attack on everything and everyone he disagrees with. His fellow practitioners of psychology catch much of the flak although anyone who takes a view of human nature that differs from his own is fair game.

Political correctness, the self-help industry, feminists, management consultants, the media ... the list of his targets is long. The basis of his quarrel with them and practically everyone else on the planet is over the notion of self-improvement. This is tosh, says Sigman: you get the hand you play with from your genes, and that's that. What's more, once you reach a certain age you should abandon any hope of acquiring new skills. He quotes with approval a Professor Rabbitt who says that with age, "the brain rots".

As a professional psychologist Dr Sigman presumably reached his views based on careful research but here, addressing a non-academic audience, he drops all the tiresome business of scholarly argument and dealing with disputants fairly and seriously. Instead, he opts for the approach of the tabloid columnist, deploying anecdote, mockery, unsupported assertion and stuff he appears simply to have made up, willy-nilly.

Worst of all, he rather fancies himself as a wit:

The Vienna of 1893 was not exactly what one would refer to as "Surf City". While Adolf Hitler embarked on his dysfunctional childhood upbringing, other Austrians were occupied mainly with making hot chocolate. Freud's neighbourhood wasn't oozing with the overwhelming opulence that characterised the better-known parts of Vienna; number 19, Bergasse, is plain drab and not really the kind of setting you would think inspiring enough to produce such supremely sexist observations and subsequent musings.

From this succession of non sequiturs there follows a defence of Freud against his recent detractors. Freud was criticised for being unscientific and for developing his theories on the basis of his own prejudices rather than keeping an open mind, so that makes him very much Sigman's kind of guy.

Like Freud, Sigman is concerned to emphasise that gender differences are fundamental. Men are men and women are women, with different brains and bodies. Given the evidence that he himself provides that he simply does not understand other people very well, it's hard to take his conclusions very seriously. For example, in order to illustrate his contention that men and women communicate differently he tells a story of how a former girlfriend used to wind him up in some unspecified way:

locating my Achilles tendon and prodding it [...] this is referred to on assertiveness courses as the "broken record" technique.

Approved psychological methods such as "feigning ennui" failed to work, until one day he discovers his inner two-year-old:

When I stared into the refrigerator [...] I saw the answer to our communication problems staring straight back at me. It was an iceberg lettuce. What Delia doesn’t tell you js that an iceberg lettuce is not just for eating. While it didn’t provide on-the-spot counselling, it was the perfect vehicle for expressing my emotions -- so i threw it at my girlfriend's much prized and rather tidy spice rack. After seeing a new mixed-spice and broken glass recipe appearing before my eyes on the kitchen floor I could feel my blood pressure stabilising rapidly. This served to further my interest in this new 'smashing therapy'; I could even see an academic paper in it for me somewhere. So I then turned my attention to other ingredients and of course, wishing to return the iceberg lettuce to its right and proper place, as well as having further emotions to communicate, hurled it back into the fridge at 150 miles an hour. My blood pressure returned to normal. Moreover, the broken record spontaneously repaired itself among the spicy shards. Being a repressed male can be an exciting gastronomic experience, unless you're an iceberg lettuce.

(How did he know the sex of the lettuce?)

Being a consistent contrarian Sigman reckons that stereotyping fellow humans is a good thing, and he practises what he preaches, applying them not only to heterosexual gender roles but also to gay men and women:

Lesbians are also unbridled by intimate contact with the opposite sex and so they are afforded the luxury of conducting relationships on their own terms, based upon the more 'female' values such as commitment, fulfilling relationships, talking, caring tenderness, plenty of extended foreplay, synchronised menstrual cycles and cosy evenings together reciting passages of de Beauvoir to each other. And, of course, sharing the same cat: the only 'pet' they have. Lesbians by and large lead rather unassuming lives compared to their gay male counterparts which is another of the reasons why it's generally so hard to identify them.

It's telling that he regards having "fulfilling relationships" as a female thing. He's equally perceptive when it comes to working class males, who apparently all talk like this imagined caller to a radio phone-in advice line:

Well, Doc, I don't exactly have a problem, if yer know wot I mean. You see, it's this bird I spotted down the booza. I fink I'm in love wiv 'er, but I dunno 'ow I can get 'er to fancy me. I'm going down the booza again on Saturday night. What do yer fink I should do?

I suspect this caller of being played by the late Sidney James.

Another matter that severely exercises Dr Sigman is sexual advice that suggests that pleasure can be got non-penetratively or while wearing a condom. He spends a whole chapter berating bodies such as Relate and The Terrence Higgins Trust for daring to say such things. In the middle of it though, he breaks off for an observation on another topic close to home for him:

It is interesting to note that the term misogyny: 'a morbid hatred of women, an extreme mental state with many possible causes' (The Wordsworth Dictionary of Sex) has, according to most dictionaries, no direct antonym, but curiously, the Chambers Thesaurus suggests 'feminist' as the closest one can get. Men may be negligent, 'phallocentric' and more insensitive and selfish than women; they may find alien or possibly even fear them, but they certainly do not dislike or hate women as a sex. Therefore a more appropriate term would be misogamy: 'a morbid hatred of marriage based in many cases on a fear of sexual intimacy or inability to undertake the responsibilities of married life'  (The Wordsworth Dictionary of Sex) - the nature of the beast, not a psychological disorder. If one wants to initiate a discussion about those who really dislike women, one need look no further than the women in control of the public image of women: magazine editors, picture editors, not to mention the Queen Bee bosses.

Thus in a single paragraph he disinvents the word "misandry" and redefines "misogyny" to mean something less uncomfortable. Mansplaining avant la lettre.

Racial matters are also a concern to him:

The indiscriminate use of the term 'racism' has alienated and insulted many people who are simply not 'racist' in the way it should be understood.

Never mind the experience of those on the receiving end, it's those who dish it out we should feel sorry for. He also seems to think the term "ethnically challenged" is an amusing one to apply to black people. Needless to say, he has many black friends and is at pains to tell us so.

Finally, should you reach the end of this scattershot and generally unenlightening rant feeling a little less than cheerful, he has comforting words:

Before one resorts to sending an SAE to EXIT, it's important to realise there is consolation to be found in pain, misery, loneliness and other dysfunctional states.

It's amazing this one, unlike

It's amazing this one, unlike so many of the other books you, er, reveal to us, was released by a mainstream publisher.

Yes, I'm always pleased by that myself. Here's another one: https://oddbooks.co.uk/oddbooks/moncrieff.html

This is perhaps the only book

This is perhaps the only book you've reviewed so far that seems very... unpleasant. Like being a woman journalist attending an MRA conference.

I dunno, I think https:/

I dunno, I think https://oddbooks.co.uk/oddbooks/maratta.html is pretty unpleasant. We have one of his relatives' word that he was a bit of a prick. I'm sure there are others as well. Roy Foster has pretty extreme views but he doesn't seem to care that I take the piss so I wouldn't count him.

Does anyone know what that means?

(I am asking for a friend in Canada.)

He means a Self-Addressed

He means a Self-Addressed Envelope to Exit, the euthanasia organisation. One of his tics is the unnecessary capitalisation of organisation names that presumably he thinks are acronyms but aren't, Relate/RELATE being another example.