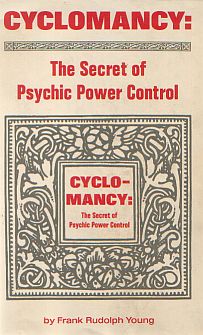 Power. Deep down, isn't that what we all want? Power over others, power to induce them to do our bidding, power to get what we want when we want it. Even better, psychic power, so one can control people with the mind, without resistance or resentment. (Just what I want for my birthday, in case you were wondering.) That is the promise of this book.

Its author, Frank Rudolph Young, says he is a master of yoga: whatever the truth of that claim it is apparent he is not a master of understatement. The blurb on the rear cover tells us, for example, that this book will demonstrate:

Personally, if I could “arouse intense desire in the opposite sex by [my] mere presence” I wouldn't worry about my waistline. That aside, Cyclomancy is so impressive in its scope that some might be sceptical about the reality of Young's claims, but he sets all such doubts aside by presenting some impeccable credentials:

Frank Rudolph Young's granduncle was a long-lived Yogi in far-away India. For 40 years, Mr Young's father investigated the secrets of psychic power in the West Indies and in Central and South America. Mr. Young himself spent 30 years investigating the scientific laws behind Cyclomancy. Since 1955 he has taught these findings to thousands of followers throughout the world.

There you are then. Grand-nephew of a “Yogi in far-away India” (India, Tennessee, I'm guessing) and son of a psychic investigator. It must all be true, surely.

Sometimes promises made on the exterior of a book are belied by its content, having been composed by some unscrupulous hack rather than its author. However in this case the tone of wild overstatement is continued throughout, and in fact the content of the book is even more insane than its blurb suggests. The following short extract comes from a chapter titled, wonderfully, How to Use the Astounding Power of Your Brain Horns and Put It Under Psychic Power Control:

Exercise 1. How To Tranquilize Highly Wrought-Up People with Infrared Ray Projections. Vince Laplante has suffered serious blows through poor investments, business reverses or a shocking discovery about the state of his health. The moment you lay eyes on him, use the Psychic Arc to bring twice the amount of heat to your body surface. Think of the juicy steak to warm up your skin, then draw this heat quickly from all over you and pack it into two narrow, short hot rods in your Brain Horns so that they actually burn your eyes a little. Deliver, now, a psychic command rocket behind the hot rods, with the following command, “Vince, you'll win out! Just be a little patient! You'll win out!” (That prevents your conscious mind from analyzing the advice and reasoning whether it is realistic or not. Just forget your logic and let your psychic power command straight to behind the hot rods, carrying with it all its confident power).

I doubt that the idea of thinking about a “juicy steak” in order to warm oneself up is part of conventional Yogic teaching, which is strictly vegetarian, but to be able to send infra red rays from one's eyes would certainly be useful, especially when the TV remote has disappeared down the back of the sofa. (“Just forget your logic”, indeed.) And as proof that Young's weird way with imagery is not confined to confusing references to “hot rods”, here's another even more bizarre example:

Exercise. How to Establish Mutual Rapport Fast Between You and Anyone. You run into Martin on the street, in the office, at a social gathering, in your house, or his, the golf course or anywhere else. Instantly visualize his torso, from head to thighs, as secreting within it a profusion of acetylcholine at every Nerve Gap. Or you can just visualize his torso and at the same time think strongly of a juicy steak or of something else that you relish eating. Maintain that thought or vision clearly for two seconds.

This mental picture will automatically be telepathized into Martin's mind. It will be a picture of a painless torso, for acetylcholine is secreted by your loving nerves, and those are nerves of pleasure, not pain.

Martin's conscious mind will subsequently ignore any pain sensations from his Sensations Recording Center which originated in his torso or which are caused by it reflexly, like a stomach headache. So he feels better immediately and subconsciously associates you with that feeling. He is left eager to meet you or associate with again. You have created mutual rapport between you two ... fast.

To encourage people to fantasise about the torsos of those they meet, bathed in secretions, seems frankly dangerous. I've seen American Beauty, you know. “Mutual rapport” may not be exactly what you create ... fast.

To write like this, one must have a very warped sense of humour, or none. To help you decide, here's some more of Young's strange advice:

If you visit ill and crabby Teddy, improve his frame of mind with the tender touch.

When you go to bed, do the Zembla to retard old age.

When you lie there, win back a vacillating romantic partner, or wife or husband, with the Psychic Antidrom.

Arouse your marital partner incredibly with the Human Lamp.

And, oh yes, “make all these attainments permanent with the Psychic Mold”. (Maybe later, when my Brain Horns are rested. Gosh, I've overdone the Zembla again.)

Nothing gets my other half …

Nothing gets my other half "in the mood" better than the Human Lamp. It saves us a fortune on electricity bills too!

Have you a copy of this book

Have you a copy of this book so I may purchase a copy?

Hi Derek, I have only my own

Hi Derek, I have only my own personal copy of this book and am not considering selling it. (Odd Books is not a bookshop, just a hobby for me.)

I will greatly appreciate

I will greatly appreciate that someone can help me get a copy of this book.

thank you very much

Visualizing a piece of steak

Visualizing a piece of steak is not the same as eating it. I fail to see how that shows he wasn't a vegetarian. So anything tried from any of his books and didn't work? That's the bottom line for me.

Anyone have a used copy or

Anyone have a used copy or even pdf scan of Young's "Zodic Force Control" for sale?

There is a copy for auction

There is a copy for auction here.

Peace, Do you still have…

Do you still have this copy available for sale?

I am intrested in purchasing

I am intrested in purchasing Cyclomancy email me at armyqt@gmail.com