The LABB System for Health 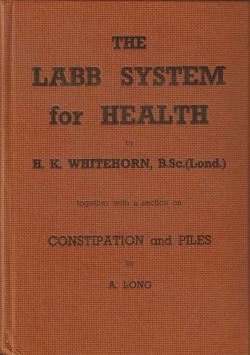 Since the main part of this small book was written, partly based on Mr. Long’s experience, it is with great regret that I have to report that Mr. Long has been the victim of an accident due to no fault of his own, as he was a passenger.

He is seriously injured.

In talking with him about the forthcoming book, he still refuses to have his name as co-author, but has agreed to a separate section for his three chapters.

Such is the foreword, in its entirety, to this curious work. As it raises more questions than it answers, I fancy that it might equally serve as the opening to a highbrow literary novel, following in the tradition of Nabokov's Pale Fire perhaps, in which the truth behind the words leaks inexorably - albeit ambiguously - out of the space between the lines.

Why is Mr Long so reticent to be named as co-author, when he wrote three chapters of the book? Was it really an "accident"? Whose fault was it, if not his? Was the nature of his injury akin to that of Sterne's Uncle Toby? We shall probably never know.

Mr Whitehorn, although a confessed amateur, bases his work on that of two doctors and the experience of the poor Mr Long (who before his accident one assumes had enjoyed robust good health thanks to his dietary practices).

To the Ministry of Health in Britain.

To equivalent Ministry of Health in U.S.A and other countries.

To every Doctor and Nurse.

To every Medical Student.

To every Health Worker.

Please do not overlook the work and teaching of two great Doctors:-

The continuous action of the heart is helped by the short period of REST between beats, so please consider that THE HEALTH OF THE STOMACH IS GREATLY HELPED IF IT GETS A SHORT REST PERIOD OF SO-CALLED "EMPTINESS" BETWEEN MEALS following a complete fast of three hours or more.

Please do not "pooh-pooh" the idea because it is emphasised by a layman: the system builds a body named after the same two Doctors:- 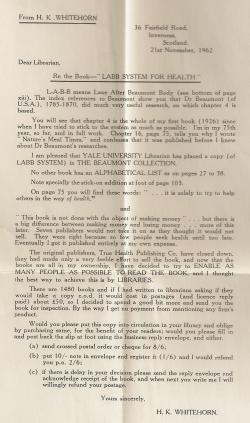 The rules of the LABB System are refreshingly lenient compared to other diet regimes:

RULE 3. (Bowel) Evacuation after each meal.

RULE 4. Drink at quarter of an hour BEFORE meals and at about an HOUR AFTER meals. Drink very little with meals.

RULE 5. Breathe rather slower and deeper than you used to do.

RULE 6. Eat something green and raw daily. Salads when possible.

RULE 7. Avoid snacks between meals and after evening meal.

One simply must have a nice round 10 rules, even if it means the last three have been tacked on as an afterthought. I wonder about number 5, though: after applying it literally and repeatedly for the last week I've twice woken up on a mortuary slab. And despite the instruction to have "something green and raw", I am not sure I should have eaten that Christmas tree, either.

Adding to the overall air of minor league battiness, Whitehorn reprints inside this book another, earlier, booklet of his, Nature's Meal Times (1927), complete with its own title page. Just as you were thinking this LABB business was going to be a piece of cake, along come's Nature's Meal Times to make your life complicated again, consisting as it does of page after page of tables listing various foodstuffs with their recommended times for digestion, the idea being that you should not introduce new fuel into your system until the previous load has been safely evacuated. 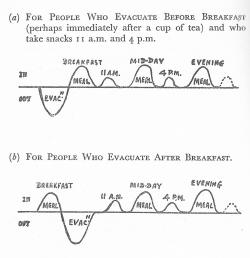 Thanks to these tables, I now know that my habitual evening meal of boiled gristle requires 5 hours of digestion time, whereas that other standby, fresh stewed tripe, slips down much more nicely in only an hour.

As one expects with health tracts, Whitehorn supplies plenty of anecdotal evidence to support his thesis, including this gem concerning the theories of one Dr. Wilhelm Schmoele:

Count Weldeck died in Paris, aged 120 years, and every springtide he was in the habit of devouring horseradish soaked in lemon-juice in large quantities. "It was not the horseradish,” says Dr. Schmoele, "but the lemon-juice which prolonged his life for so many years."

"Between fifty and sixty, the dose for ladies is set down at three, for gentlemen four lemons a day. One lemon more per diem is ordained to each sex for every additional decade."

According to Herr Doktor Schmoele, if one eats enough lemons one may live forever.

The answer may be a lemon, but with all this time on one's hands, in Spring an old man's fancy turn's to other things. So what, you will be asking, does the estimable Whitehorn have to say about SEX? This:

The Labb System and the Sex Glands

This small book does not mention the subject of SEX - very important to Health. There is one way in which benefit is obtained by LABB system workers, as will be seen by Page 92. which show that there is reduced morning pressure on the sex glands because the rectum is not over-full. This gives more restful sleep incidentally.

Only those who make up their minds to follow the LABB system can appreciate its advantages.

Sir Wm. Arbuthnot Lane wrote a "Foreword" to the first edition of The New Art of Love (Torchstream, London) and his recommendation is worth noting. There are several books which are helpful, but everyone should read Sex and Religion, published at 1/- by Mothers' Clinic, 108, Whitfie1d Street, London, W.1. 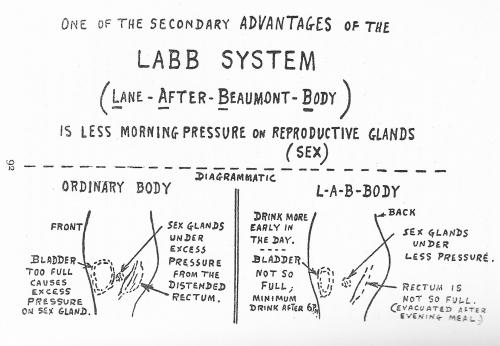 But what of Mr Long? As promised, there are three chapters devoted to his conquering of piles and constipation through the LABB System. Apart from the observation of the correct interval between meals Mr Long has much to say on the topic of the procedure to follow when one visits the "W.C." shortly after each meal. Some digital intervention is required:

Despite his willingness to provide such frank and detailed instruction in the art of elimination, Whitehorn's book did not find an audience. As the letter I reproduce confesses he was forced to pay for publication himself and then, 13 years later in 1962, somewhat desperately to send it on spec to libraries in the hope that they would pay for the copy supplied. As his return envelope was still in my copy, the library whose reserve stock it came from did not, one must assume, fork out the 8 shillings and sixpence asked for (42.5 pence in today's money). Worldcat says 8 libraries hold the book of which 6 are in the UK, so Whitehorn was probably left with the bulk of the 1,480 copies he'd paid for. It's rare, and quite touching, to have such detailed information from a self-publisher about their struggles to get their book noticed.

I don't think I'd be able to