How to Live with a Bitch 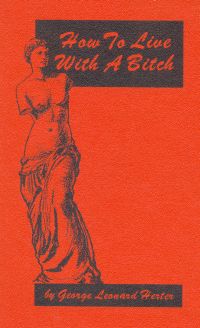 What a title, eh? Sadly it isn't quite the full-on male chauvinist rant one might hope for: rather, Herter comes across as a cranky old geezer, possessed of numerous largely reactionary opinions which he unfortunately feels driven to express.

One of the eternal follies of old age is the delusion that you have a duty to record your insights into the nature of humanity before you perish, overlooking the fact that they are already common currency in every bar or taxicab in the world. In this respect, Herter is somewhat out of the common in that one might have to visit as many as three drinking establishments in a large town before finding his equal.

"I wrote this book to show that husbands and wives have a very difficult time of getting along", he states in his very brief introduction, incongruously placed beneath the book's copyright notice. On the evidence of this volume, in Herter's own marriage this difficulty may be intensified if at home he is as prone to enunciate his strong ideas - on such subjects as sex education (good), birth control (bad), psychiatry (very bad), the national debt (bad), God (very good), opinion polls (bad) - as often and at such length as in the book.

As well as these fascinating byways, Herter stays on topic long enough to give us two whole chapters on the subject of marriage, in which we learn, for example, that:

In Asia or the East as it is sometimes referred to, women are for the most part brought up to be submissive to men. Divorce is rare, I have talked to many of these women and in no case have found them unhappy with their lot.

(Mr Herter is just the sort that women confide in, so I'm sure we can trust his judgement).

His chapter on how to prevent divorce also informs us that nuclear reactors are very dangerous, and that men should not wear long hair. It also supplies this insight:

I am for progress to a degree but as yet have not become used to automobiles. I still prefer horses, say nothing about travelling in space ships.

The book is capped off nicely with an example of a form popular with self-published authors, a political allegory which demonstrates how simply the world could be put to rights if only humanity would come to recognise the sheer common sense of the author's views. In Herter's story a war hero with the transparent name of Paul Neetriht becomes President and establishes a supposedly benevolent form of dictatorship, with low taxes, no foreign aid and an interesting approach to dissent:

Paul quietly got the athiests and birth selectors out of public office and government control. No one was hurt, they were just gotten out and they knew better than to make a fuss.

We are not given any indication of what Herter's wife might have thought about his writings, though I doubt she was flattered by its title. Hopefully, she was inspired to write her own book in response, called perhaps "How to Live With a Bore (While Pretending to be More of an Idiot Than He Is)".

Yep. Still laughing. This title caught my eye in a cookbook, of all places: “American As Apple Pie“, Phillip Stephen Schultz; page 236, in a comment box regarding another book by Herter and his wife Berthe, titled “Bull Cook and Authentic Recipes and Practices”. Now that one, I’d love to get my hands on. Anyway, that it exists at all proves that the two must have managed to tolerate each other more than one might guess.
Thanks for the fun review!!

his new book "how not to be

Oh my God, this review and

Oh my God, this review and chain of comments are so good. So good! From the spaceship quote, to the allegory ending, and the insert of the thoughts on marriage-counseling... gold. Choice humor. I was laughing out loud, but then the commentary...

Our man screaming, the wonderful man with his fishing metaphor, the lady defending men being men, ‘only do occasional nice things’, the man attacking the writer of the review! Oh, this is so good, by god, this is some fine plucking and clacking at the ol’ QWERTY! Ha, by god, ha, mighty fine. MIGHTY FINE! Keep at it America!

Do you always talk like this or did the lady of the house slam your balls in a drawer? Cracking funny, eh?

Thanks, Brent. I hope it's

Thanks, Brent. I hope it's not only Americans who can "keep at it". By George, sir, when we are roused, we British will do our bit.

Spot on! Cheerio, pip pip and

Spot on! Cheerio, pip pip and all that rot, ya wanker! No wonder we had a revolution and threw you blokes out of here.

I inherited a copy of this

I inherited a copy of this from my father, it was a sexual education that i'll never forget. He passed away when i was a lad and much to young for the talk so basically this is how i learnt about sex from a 1971 book. By the way i'm a 26 year old male and this book changed my life for the better, later

Paul got the athiests out of

Paul got the athiests out of public office because the one thing every public servant needs is thighs.

I recently found this book

I recently found this book among my deceased father's belongings. I cannot describe how astonishingly ignorant this book is - made me sick to my stomach - needless to say, ours was a dysfunctional family full of anger, bitterness and shame .. I have no idea if my father ever took this crap seriously, though he did share many of these opinions. An ironic title should be "How to ruin a marriage, F*** up your kids, and make the world a fearful and bitter place to live in." This review is spot-on - I can't believe anyone would take this book seriously; either be amused, or profoundly horrified realizing some poor souls do. Sex education, migration, psychiatry, drugs and politics are other topics this bombastic arse expounds upon. I admit, I personally found this book disturbing.
Submitted by George Herter (not verified) on 30 Jan 2018 - 22:37 Permalink

Not as disturbing as I find

Not as disturbing as I find you! Stop blubbering about your dysfunctional family (oh how modern you are) and what a jerk your old man was. Pull your head out of your ass, take a look around and live you life. Seems to me the worst thing your old man apparently ever did was not get a vasectomy before you we born. Or maybe he did and the mail man got in there when he was away at work or something.

In the mean time we "poor souls" are going to have some fun while you whine about all the bad things everyone else did to you that was SOOOOOO terrible.

What the heck does he mean by

What the heck does he mean by the birth selectors? I'm guessing it's a derogatory name for people who believed in family planning or controlling population growth (Paul Ehrlich's The Population Bomb was popular around the time this diatribe was published), but it sounds more like a device from Brave New World.
Submitted by Hess Hugh (not verified) on 21 Dec 2010 - 19:55 Permalink

I have a post to contribute to your discussion here, Alfred. How do I submit it so it's not rejected by your "Spam Filter"? Thanks, S. Ulrich
Submitted by Alfred Armstrong on 21 Dec 2010 - 20:31 Permalink

Filtering is done by an

Filtering is done by an external service, Mollom. I am not in a position to guess what it doesn't like about your comment. Certain words and links are more likely to trigger these filters than others.

My wife rarely stops bitching, nagging, and complaining. It consumes every waking hour of her life. She starts first thing in the morning and continues until i can get out of the house - then she calls me all day long at work to bitch and complain and tell me what I'd better do. Then when i get home, within 2 minutes I am again under attack. I spend several hours every day with my ears plugged and often end up sleeping in my car. We have been married over four years and only had sex four times during that period. I would have never believed marriage could be so hellish.
Submitted by George Herter (not verified) on 30 Jan 2018 - 22:16 Permalink

Sex four time in four years. You have indeed described a small corner of hell. And I am assuming those four times were not just with yourself, which would be another. You could of course, tell her to shut the hell up, take of her clothes and get down to business. You'd be amazed how much of what you describe you can put up with if you are getting laid of a regular basis. Goes for her too. Hell hath no fury like a woman un-fucked. Or so they say.