The Atomic Bomb in Prophecy 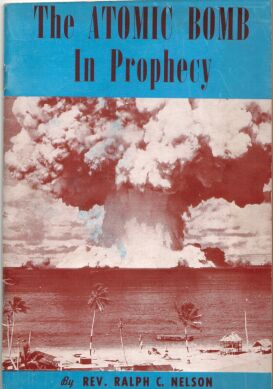 Everything's in the bible, isn't it? Text messages, genetic engineering, the internet, anti-wrinkle cream, the lot. One pioneer in the subtle art of showing how every development of the modern world was predicted by the prophets is the Reverend Ralph C. Nelson, who, in this brief pamphlet dealing with the - at the time of writing - recently developed atomic bomb, demonstrates a singular ability to penetrate the impenetrable.

Nelson sets himself the task of finding the passage - of course, there must be one - which deals with the bomb. He first considers various extracts that refer to God laying waste to the populace, but all these he rejects, because it was man, not God, who was responsible for Hiroshima and Nagasaki. Instead he singles out the following (Zech. 5:5-11):

Then the angel that talked with me went forth, and said unto me, Lift up now thine eyes, and see what is this that goeth forth.

And I said, What is it? And he said, This is an ephah that goeth forth. He said moreover, This is their resemblance through all the earth.

And, behold, there was lifted up a talent of lead: and this is a woman that sitteth in the midst of the ephah.

And he said, This is wickedness. And he cast it into the midst of the ephah; and he cast the weight of lead upon the mouth thereof.

Then lifted I up mine eyes, and looked, and, behold, there came out two women, and the wind was in their wings; for they had wings like the wings of a stork: and they lifted up the ephah between the earth and the heaven.

Then said I to the angel that talked with me, Whither do these bear the ephah?

And he said unto me, To build it an house in the land of Shinar : and it shall be established, and set there upon her own base.

A talent was a measure of weight for which my sources give different values between about 30 to 60 kilos (60 to 120 pounds); an ephah was a bath-like container used as a measure of corn, containing about 40 litres (9 gallons); Shinar was a place which is commonly identified with Babylon, though it is also thought by some commentators to refer to China.

Now you may think this passage does not seem to have much to do with the atomic bomb. Commentators I have read interpret it as meaning that the (then ongoing) exile of the Jewish nation from the Holy Land was God's retribution for sins of theft and perjury, the ephah standing for fraudulent trade, and the woman for the Jews, while the talent of lead represents guilt. The Reverend Nelson, however reads the passage differently, his key being the mention of lead, which he calls “the master metal”. Without it, he solemnly tells us:

it would be impossible to handle radioactive elements.

In trying to follow his argument one might think that “the woman that sitteth in the middle of the ephah” is supposed to be radioactive and that is why she has to be sealed up with lead, but no. Actually, in Nelson's view, the woman is “the master mind”. Here he clarifies:

Mentality (the woman) in the midst of metal is equal to mind over matter. This statement is doubly qualified for consideration when we observe that the lead ephah, or measure, cannot, at least, does not, retain the woman, but rather, it gives birth to another. The outcome, then, of this leaden vessel is the birth of two women who take the vessel in hand and carry it to the land of Shinar. Though the lead is apparently master for a time, it soon becomes subservient to that which lies within. Actually, it has no mind of its own, but since it is the product of many master minds, and they in turn are reliant upon lead, one would have extreme difficulty in presenting a more simple picture of mentality over matter than a “woman” in an ephah of lead.

So, if you ever happen to be playing that TV gameshow where they put up a picture and you have to guess the well-known phrase or saying it represents, you'll now know the answer for a woman lying in a sort of small lead coffin. Yes, it's: “Mind over Matter”!

Anticipating that some smart aleck might question Nelson's identification of the atomic bomb with a woman, pointing out that it was actually a team of men who developed it, Nelson is ready with his rejoinder: it was Madame Curie who discovered radium. (So there!)

Like many other bible nuts, Nelson is against the (“feminine”, he says) United Nations, which he identifies as the “great city which reigneth over the kings of the earth” foretold in Revelation 17:18. The U. N., he fears, will team up with the U. S. A. and bring about a universal Pax Atomica. To Nelson and his fellow fanatics this is abhorrent because it means giving men of all religions (and none) an equal place at the table:

There is yet “The Bond of a Name” to consider. It was one of [the founders of the U. N.'s] universal objectives. Names mean much to God - but little to modern men. Soon a universal name must be selected for a modern world. There are now too many that offend. To be called a Nazi in one part of this world would invite disaster; to be called a fascist, calamity; a communist, condemnation in one place and commendation in another. In America and Heaven it is an honor to be called a Christian; whereas in the Moslem world it is a dishonor. You see, my friend, this “Peace” of which the “One World” speaks will have to dissolve names. And social problems are like chemical formulas; to bring about chemical action, another element must be introduced. In the social realm, it will be a universal name. In the 13th chapter and verse 17 of the Revelation this is made very plain.

“And that no man might buy or sell, save he had the mark, or the name of the beast, or the number of his name.”

The bond of a name is a prophetic certainty for this fast-ripening age. Thus you can see, like the “slime” of Shinar bound the ancient brick together, a name of common clay will cement common brotherhood of certain damnation.

In his looking-glass view nothing may be judged on its own merits but must instead must first be related to what the bible says, or, rather, what Nelson says it says. Sadly, at least as far as the U.N. goes, there are plenty around today who have similar views. Grief. If the universe really is ruled by the all-seeing, all-powerful, bad-tempered moron these people believe in, is there somewhere else we can go? Please?

(More biblical nonsense, should you want it, can be found here and here.)

Something else for you all to

Something else for you all to consider is that there is a very crystal clear description of Nuclear War at the end of the tribulation contained in the book of II Esdras (i.e. the Apocalypse Ezra) which was considered Inspired Scripture by the entire Church for 1500 years before it was removed by the Protestants and was contained in the KJV for 200 years before they removed it and it is referenced several times by the New Testament including by Y'shua. It is the book that called him the Son of God which, then, influenced many people in Israel to consider that the Messiah was going to be the Son of God. The Vision of the Man from the Sea is referring to theReturn and the Vision of the Eagle from the Sea is describing the rise and fall of America before the Return.

Actually, the passage probably referrs to covering over food with lead to keep it safe from radioactivity - ephah being the chief measure for commerce in the Bible.
Submitted by Alfred Armstrong on 31 Jan 2012 - 19:56 Permalink

Yes, that'll work in times of

He makes a good point about

He makes a good point about names. Everyone today associates with a name. School kids associate with names like 'punk', 'emo', and 'nerd'. Religions, of course, have their own names for their members. A country's citizens usually associate themselves with the name of their country. In almost every part of society, people associate with a name because just a name can describe a person almost completely. If what Nelson speaks is true, what name will you choose for yourself?
Submitted by Alfred Armstrong on 09 Dec 2009 - 15:21 Permalink

No, he doesn't "make a good

No, he doesn't "make a good point about names", nor do you. A series of non sequiturs does not constitute an argument.