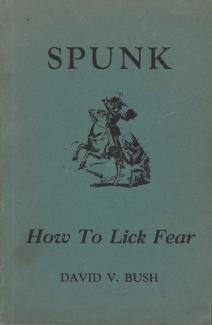 Alfred A---- of the United Kingdom, though born into pitiful circumstances, is now hailed on every side as the world's greatest collector of books that others do not want. How did he accomplish such a feat? When confronted with unreadable pages penned by maniacs, did he shy away? No! Rather, he pressed on, though his all his senses cried out against the effort. For he was filled with SPUNK.

As William Shakespeare, the famous writer, put it, "In time we hate that which we often fear. But here comes Antony." When you are on your knees in the gutter, your head bleeding from a wound inflicted by the knuckles of a ruffian who has stripped you of your money and run off with your wife, verily, you should thank him for the opportunity to rise up and believe in your success. That's hero stuff!

"He who blesses his friend with a loud voice early in the morning, it will be reckoned a curse to him" says the good book. If a man puts his shoes on the wrong feet, he will find it difficult to walk. Don't be like that man: put your mental shoes on correctly and tie the laces carefully. If you think you are going to have prosperity, you will. H. A. Ballou, eminent paint retailer of Worcester, Mass., through grit and gumption became an eminent paint retailer and there is no reason that you cannot become one too.

Think of the bathtub! There was a time in this great country when bathing was considered a dangerous deviation. The poor bathtub was attacked on all sides by legislators thirsting to ban it. What are your troubles compared to those of the bathtub? Have you been called undemocratic and a menace to health? No, so follow the example of the bathtub and keep on in the teeth of adversity. You too may be a fixture in every home.

Smile! You may not be able to right away. Perhaps you have a mouth that people like to punch, but keep at it. One day, if you keep trying, you will have something to smile about. An insurance salesman knocked on the same front door every day for a month, each time getting the same answer: no. One day, though, he looked down and found a quarter, so when his prospective customer opened the door the salesman offered him the coin. The man took it and shut the door, but a little slower than before, allowing the salesman time to withdraw his foot before it was crushed. Thus small victories accumulate. Go though and do likewise!

Similarly, did Alfred A---- flinch from parodically mocking a book that few have read? Did he ever worry that no one would think it the least bit funny? He did not. He had faith in himself despite it all. Inspired by Bush, he licked his fear, summoned up his spunk and, with a mighty roar, overcame.

Well done sir, a future as…

A story for the ages. (although maybe not the Earth's earliest ones)