Fearless Frank, or, Tidbits From the Life of an Adventurer is a play based on Frank's life. It was written by Andrew Davies. The musical version has music by Dave Brown.

Also see my review of the TV production.

Here's what Andrew Davies had to say about Fearless Frank when I asked him about it, via the magic of e-mail:

The thing about Harris in particular is that you get so much more than the sex - it's a wonderful picture of the age - he met (or claimed to have met) all the great men of his time, and also had loads of adventures as a young man, especially in America, where he claims to have been a cowboy amongst other things.

I think even at first reading I suspected that Harris might not be an entirely reliable narrator - but his exaggerations and inventions are so funny and delightful (often unconsciously funny) that you get swept along on the tide of narrative.

When I became a writer myself, I thought he deserved to be better known. But it was difficult to see how he could be successfully portrayed on stage or screen - partly because he was such a liar.

Then I came across Philippa Pullar's brilliant, funny, and sympathetic biography of the great man, and found out that "My Life and Loves" had originally been written when he was old, impotent, and broke - and that he had dictated it to a succession of secretaries in Paris, often sitting at a cafe table.

That gave me the framework for the TV play - which was the original version of Fearless Frank. If Frank could be seen dictating the story in the cafe, to a very pretty girl whom he is (of course) trying to seduce, the audience will immediately begin to grasp that he is exaggerating to impress. The secretary was played by Susan Penhaligon, an actress who was really a bit like the British Bardot of her day - she delightfully combined an air of sweetness and innocence with a powerful sexuality. And when we go into flashback and see for example Frank's first girlfriend of years ago, she has Susan P's face and body, and the audience begins to suspect that perhaps all his tales of conquest might be imaginary.

Going back a bit - when I had the idea I proposed it to Louis Marks, a BBC producer I'd worked with two or three times. He was enthusiastic, but it was hard to find a director who "got" the show, but eventually we got Colin Bucksey, who really went for it. Rossiter, too. I can't really improve on what I wrote about Rossiter in the piece you quote.

The TV play was a success, and attracted the attention of Dan Crawford, a delightful and eccentric American who ran (and still runs, I believe) the Kings Head Theatre, a small but prestigious pub theatre in Islington. He suggested the idea of a musical to me, and introduced me to Dave Brown. I had never written song lyrics before, but I fancied the idea.

Dan talked to Rossiter, who was keen to be in it, and as a big star at the time, take it into the West End. For some reason, they couldn't agree. Bill Stewart took the lead and gave a splendid performance. It was a big hit at the King's Head, and its run was extended. It teetered on the brink of a West End transfer but neve quite made it, probably because of the lack of a star name in the main part.

But David Black, an American producer, fell in love with it and mounted a production on Broadway. Robert Gillespie, who had directed it brilliantly at the Kings Head, directed this production too. But it was disastrous. Niall Toibin is a brilliant actor, but his style is underplayed, subtle, super-realist - not right for Frank Harris at all. The supporting cast was American, and here we fell across the vast divide that separates our cultures, and particularly our sense of humour. And the stage seemed too big, and the air-conditioning droned out the actors, and we opened in a heatwave......a Broadway flop is an experience everyone should go through once in a lifetime. I've had two, which is one too many.

I find him a great source-book too. I'm currently adapting Dr Zhivago for TV, and when creating the particular kind of dressmaker's establishment that Lara's mother owns, I went back and read Harris's account of the places he took his young girlfriends to in Paris, places where the mirror afforded the gentleman privileged views, and a little hanky-panky in the fitting rooms was not out of the question.

And when adapting Trollope's The Way We Live Now, all about a big City scam in the 1870s, I went back and read Harris's description of the ostentatious City banquets he attended, in which the stench of farts was overpowering and chaps collapsed into their dinners. 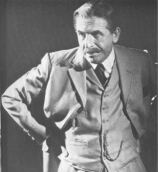 You might want to read my review of this production.

In October 1978 the first production was shown on BBC TV, with the late and sadly missed Leonard Rossiter as Harris. The Director was Colin Bucksey and it was produced by Louis Marks.

(The picture shown of Rossiter as Harris is from this production and is copyright the BBC).

"...He blustered, he cajoled, he buttonholed, he fawned, he raged, he leered, he revelled in the life he created as Frank Harris. His work was almost incredibly fast, neat and inventive, and yet he always seemed to have oodles of time to get it all in:

"Looking for comparisons one tends to go outside acting, towards boxers, bullfighters, the batting of Viv Richards. And the element of controlled aggression in this comparison is not fortuitous... Rossiter made a symphony out of this simple refrain ["Legs! Legs!"], sounding it as everything from a joyous Basil Brush squawk to an infinitely poignant dirge for lost virility..."

Seeing this performance on the TV was one of the sparks that lit the flame of my interest in Harris and thus led to this site. 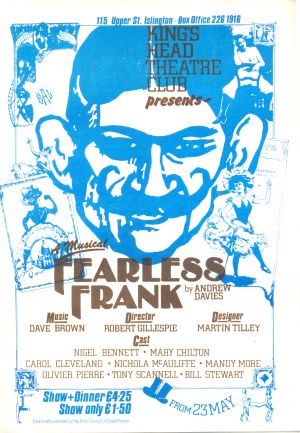 The musical version of Fearless Frank was first performed at the Kings Head Theatre, Islington, London in May/June 1979, with Bill Stewart as Frank Harris. Other parts were as follows:

It was directed by Robert Gillespie.

According to Performance magazine:-

"Fearless Frank gives us a representative sample of events in his life ... The scenes are played out by the company in a broadly-caricatured revue style with ... [sketches], some funny, some inept ... interspersed with simple dance routines and innocuous songs ... There's the germ of a good play here ... This production, however ... impressed me only as a jog-trot sort of index or chronology of the life of a fascinatingly obsessive man."

I have no cast details for the Broadway production, except that Niall Toibin played Harris. Directed by Robert Gillespie.