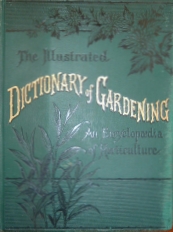 Here's a curiosity: I was recently contacted by a man who works in an Oxfam bookshop in Bristol. The shop had come into possession of a set of The Ilustrated Dictionary of Gardening with four of the eight volumes apparently bearing Harris's signature and the date 1885.

They'd previously had some other books in their stock that were signed by Harris, so it was possible these were from the same collection.

I was asked my opinion as to whether the signatures might be genuine or not, so I said I'd take a look and see what I thought, though I was sceptical: in 1885 he was 29 years old and had recently taken over the editorship of the Evening News so it did not seem likely that at that time he'd be getting his hands dirty in the garden.

When I saw the scans of the four signatures I was intrigued because each was slightly different from the others, and yet each bore an unmistakeable resemblance to that of the much older Harris. Instances of his signature from before about 1900 are relatively uncommon, whereas after that date he signed an awful lot of letters and books - and I have in consequence around a dozen examples to compare with the ones from the gardening books.

My feeling is that these are genuine. In 1885 the young Harris might well have been still in the process of developing his signature, experimenting with different styles, so the variations between them - and between them and the mature form - would then be natural enough.

Judge for yourself: I've added two of the four examples sent to me, and one taken from a limited edition of one of his books printed in 1926 over forty years later.

But - gardening? I went in search of further evidence and found a possible suggestion of one in Philippa Pullar's biography of Harris. She says that in 1885 Harris bought what is described as a "small house" in Kensington Gore. It is not unlikely that this house had some sort of a garden. Might not Harris, full of youthful enthusiasm at becoming a householder and perhaps picturing himself growing presentation roses and vegetables, have purchased the Dictionary of Gardening as part of his furnishing of his new property? It doesn't seem implausible.

(What's more, as Harris was a keen horseman he'd have had ready access to that most vital of garden supplies, manure.)

The books will probably go to auction shortly. Should anyone reading this have an interest in them let me know and I'll pass your details on to the shop.