A report on the strange findings in undergarments washed with soap and water and popularly supposed to be clean, fresh and wholesome
Author(s)
John A. Bolton, M.I.H.
Publisher
The Author
Edition / Year
1924
File under:
health clothes filth
In the section labelled
Lone Voices 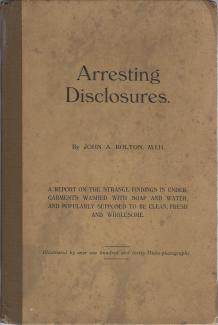 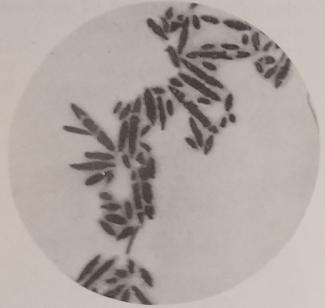 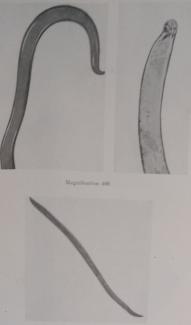 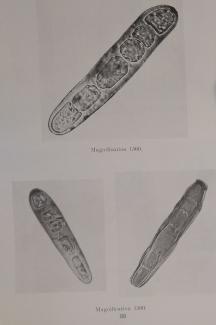 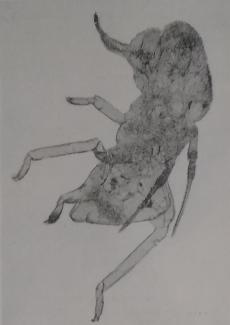 One day, several years ago, when passing by some stacks of laundered undergarments, my attention was arrested by an unpleasant odour of perspiration, which is frequently noticed in garments worn next to the skin.

This was the pivotal moment in John A. Bolton's career, his road to Damascus, his taste of a madeleine dipped in tea: an encounter with a pile of smelly vests. Bolton (seemingly no relation to hawkish American Mr. Pastry lookalike John Bolton) determined to find a better way to wash clothes. As the manufacturer of "Chilprufe" woollen undergarments, he took a special interest in the subject, and having a well-equipped laboratory, he was able to test the result of different washing methods using modern equipment.

When he used a powerful microscope to examine underwear washed in a conventional way with soap and water, he was horrified by what he saw. Unidentified organisms were to be found in abundance. In the absence of evidence to the contrary, he concluded they were probably harmful to health.

After much research he came to the view that soap itself was a major contributor to the problem. After washing it left behind sticky residues in which microbial life would flourish. But as a manufacturer of (and evangelist for) woollen clothing he was not prepared to embrace the simpler possibility that cotton would be better than wool for undergarments as it can be laundered in water at boiling point, exterminating harmful bugs.

Arresting Disclosures is most notable for the number of photographs of horrid thingies found in washed clothes, which are undoubtedly frightful and probably brought a great deal of anxiety to sensitive readers. Bolton's answer to the supposed problem of soap seems to be "don't use soap" but to wash everything in clean water three times instead. However, whenever he describes one of his demonstrations it is of re-washing garments already washed in soap, so what he was actually doing was rinsing. His experiments seem to have proved not that soap was ineffective, but that people were not rinsing it out properly.

Before Arresting Disclosures was published Bolton, who had some gift for publicity, had managed to get a degree of press coverage which he reproduces as an appendix to the body of his volume. He was strong enough in his convictions that he even included those that quoted experts pooh-poohing his findings, saying that his microphotographs are merely of "dust" or dead organisms. Here's part of one article from the Daily Express, with a characteristically alarmist headline:-

Mr. J. A. Bolton, of Leicester, manufacturer of one of the best-known brands of underwear, declares that almost every garment of that kind shelters millions of microscopic parasites, which are unaffected by ordinary laundry washing.

He maintains a perfectly equipped laboratory at his works, and an examination of undergarments referred to his firm for repairs has, he told the editor of the ‘‘Leicester Mail’’ yesterday given him some staggering revelations.

"These parasites,’’ he said, "are exuded through the pores of the skin, and live and thrive in the underwear. There are diminutive worms, cysts, fungi, and many other creatures swarming in every vest which is taken off and sent to the laundry,

"And soap-washing does not remove them. Underwear, when returned from the laundry, is matted with moving myriads of unnamed forms of life unseeable to the naked eye.

“When new garments were put under the microscope before leaving the factory they were found to be quite free from the objects discovered in the laundered garments,”

Mr. Bolton, who has already spent four years on this research work, declares "he is not going to let the matter rest until he has separated and named every variety of creature.

He invited the editor into his laboratory, and this is what the editor says --

“We sat down at the microscope and were fascinated by what we saw. Beneath our eyes was a mass of living forms of various shapes, sizes, and colours.

"The creatures were wriggling and working together in as crowded a formation as are bees when they settle after swarming."

"I seriously think,’’ says Mr. Bolton, ‘‘ that we are in touch with what will help the research authorities with regard to cancer and other diseases. Get a complete knowledge of these creatures and we shall know much more about the human body."

Mr. Bolton’s object is not to upset the laundries. What he is making known is the fact that soap does not destroy the creatures of filth.

Mr. Bolton adds: "Science must try to make people so healthy that they will not give off these millions of strange creatures and it must discover new methods of cleansing clothes."

The Daily Express, eternally ready to crusade against the tide of filth.

You can still buy Chilprufe underwear, though it is made of cotton now. Bolton would surely not approve.