You Have Lived Before! 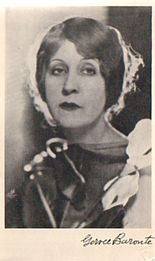 “Gervée Baronte” is (ignoring the accent) an anagram of “be ever rot agen”: an observation as significant as anything in this book of hers, which purports to describe the previous lives of a number of famous people, and a few utterly obscure ones.

We learn, for example, that Bernard Shaw was formerly Euripides and that Stanley Baldwin was an important, if rather shadowy, figure in ancient Carthage:

Signs indicate that he took part in the Punic wars. No actual fighting was shown for him, but war has many ramifications. He might have sailed around the Pillars of Hercules (as the Carthaginians called the Mediterranean [nearly right - A.A.]) in the wake of Hannibal, looking after that Phoenician hero's reinforcements. Doubtless he rejoiced at Hannibal's victories and lamented at his failures. It is probable he ordered the priests to throw the human sacrifices to their God Moloch (the god the Greeks called Saturn) as an offering for Hannibal's success.

What a pity Ms Baronte is unable to supply us with similar insights into Tony Blair's no doubt equally colourful past. Never mind, though: she does tell us all about Hitler:

His hatred of the Jews is a plank in his platform. He doesn't really hate them. ... The lesson he must learn in this life is thoroughness, and he must learn that produced hatred doesn't make for progress. He will learn his lesson. He will emerge from a welter of abstractions, slogans and fine surfaces to face facts.

Even in 1936 this was a rather optimistic assessment of Hitler's character. (Did she really imagine he would one day get up and say, “Sorry about all that stuff about the Jews. Silly me! What was I thinking!”?)

Baronte's book had its origin in a series of columns in Pearson's Weekly, a forerunner of the UK magazine Titbits. Some of these took the form of a sort of psychic agony column, judging by the chapters in this book where she depicts the past lives of several anonymous individuals, identified only as “a timber merchant”, “a mother's help”, “one of the unemployed” and so on; for example, “a landscape gardener” whose dream is “of hidden treasure, which seems to be under the floor of an outhouse” (one wonders what Freud would have said about that) is told he was leader of a Bedouin tribe six hundred years earlier:

Because you were wealthy you lived in a house in Hadramaut. Your servants lived in tents of woven goat hair in some near-by oasis. During the heat of the day, when the merciless sun baked the face of the desert, you stayed indoors - if you were not on caravan march - eating the rice mixtures and the sweetmeats which your wives and the slaves had prepared for you; reading, perhaps, the songs of Hafiz [sic, for Hafez] and Sadi [sic, for Sa'adi] while some semi-nude boy fanned you with a bit of palm leaf.

Similarly, “a secretary” is told she “lived in Egypt in the XIXth Dynasty during the reign of Rameses II” and “a teacher” lived in “China in the beginning of the Han Dynasty”. (Isn't it strange how everyone's former lives take place in periods and places easily researched in any reference library? Most mysterious.)

In the next section of the book, Ms Baronte works her trick the other way: by locating the later incarnations of several historical figures including Cleopatra, Napoleon, and Queen Elizabeth, of whom we discover:

Her former mother, Anne Boleyn, is now her sister... [she] will have some position in a local government during her present incarnation. It will not add to her happiness, as it will be less than she expects.

Jobs in local government are often like that. Meanwhile, Joan of Arc has been reincarnated as a “a young Jew in Palestine”, but, poor fellow, “celibacy is indicated again, for the virgin Joan still persists in another guise”.

Ms Baronte long since passed from the phase of existence in which she wrote this book. Is she too once again living amongst us, “in another guise”? My talent for divination is rudimentary, but I have the uncanny sensation she might well be found in an analogous situation to her former trade: down on the farm, shovelling piles of steaming horse manure.