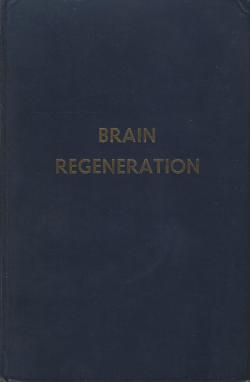 We shall try to study the phenomena known as nervousness in the human body, some of its causes and a possible cure; and also we shall study the effect of the continual pull of the earth, which is called gravity, upon the human body.

Pundit Acharya's trick, which will be a familiar one to students of psychoceramics, is to draw liberally on those scientific sources that can be misinterpreted to support his ideas while vigorously berating scentists for their blindness and ignorance. For example, while comparing his own treatment of neurosis to that of conventional medicine, he tells us:

[The doctor] gives sedatives, culminating in opiates (triple bromide and so forth) which tend to take the blood away from the head, so the brain cells will not get enough oxygen and protein to oxidate and therefore they go to sleep. That is the principle. This is done so the brain cells do not have any food to work on. If they are starved they can’t work. The drug is given to decrease the regular flow of blood in the head by numbing the heart muscles and the heart cells. This is the principle of sedation. Calm down the sympathetic and the para-sympathetic system with morphine and atrophine working on both systems at the same time. This has been the theory of medicine in different parts of the world for a long time: keep the heart and the lungs quiet so that the tremendous supply of blood does not go to the head and oxidation does not take place.

I am no doctor but it seems to me that if sedatives did work in this way then their use would lead to permanent brain damage. Acharya's four-step alternative plan is also fairly extreme:

What the medical man has to do: First change the chemistry which is behind the habit. Clean him up. Continually clean him up. Magnesium sulphate is very vulgar and very bitter. Clean him up continually, by his own defecation, urination, perspiration. Clean up his system in every possible way. Doesn’t nature keep on cleaning it up?

Symmetry is a biotic necessity. Discords, crazy chaotic discords are destructive to such an extent that they will destroy the very life. Come out with me and see what’s happening every day on Broadway and near Broadway with all the neon signs and so on. Yes - different wavelengths of this light and color are going on in those lights. If we are to take the patient, we must shut him up where there is no light. Not give opium but take away the light. Rest his eyes.

Lock him up in a darkened room. It's for his own good.

Third, analyze this world of discords and different wavelengths in the sound world and see what’s happening to him. Even our records catch some of it. Just listen to the music from a distance and you will know what is happening in a city street. Different wavelengths! Talk about orchestration. It is the craziest orchestration in the whole world that is going on in his ears day in and day out. Put him in a prison where there is no sound. Regeneration will take place. Give him continual carbohydrate food supply because he needs energy. Less protein and continual carbohydrate food supply. And all along you are to neutralize the poison in his system, so give him alkaline food. Not medicine, but food, because medicine comes from food.

Chemistry comes from alchemy. Give such food which will neutralize. Continual lemon juice. Very vulgar, very ordinary Grandmother’s medicine. Continual citric acid in his system. Continual bitter in his system. The bitterest food and the sourest food that you can find. Teach these cells just as they have learned the other thing. Whip the sensory cells to action. The patient revolts. This is sour, bitter like anything. And that’s the shock the cells need. Kick them, wake up the sensory: the sensation, the feeling aspect of the patient. He has been living continually on these storms of impulses. Impulse means motor impulse-tendency to act. Give this new shook then: wake up the sensory system. Keep it up and feed the cells. Gradually the regeneration begins to take place.

Give him alkaline food, drenched in lemon juice (I know, I know). If he revolts, that shows the cure is working. Ignore the screams.

Fourth, eliminate psychic disturbances. Take anything away that will arouse his complexes, his ideational world. Take away every new idea or book, any blessed thing that can wake up his ideas, and so on, and instead give aesthetic meaning. The word aesthetic means the harmony of different wavelengths. If it be music, it has got to be perfectly harmonious, in perfect ratio, and proportion among the metrical wavelengths of these vibrations - 3 to 6 to 9 to 12 to 15 and so forth, that's the theory of harmony. Give harmony in terms of sound, in terms of sight, in terms of color and so on. And if there be a doctor and a nurse, even the doctor's voice has got to be rhythmical, because the patient has to be fed on the symphony of rhythm. Then he will have started regeneration. A heart doctor might do it for a high fee per visit. And if he tried it, he would go crazy. A multimillionaire's son and daughter perhaps could afford it for six months. Then gradually, provided the will center is not completely dead, through training you will begin to wake up the will.

No books for you sir! Just enjoy the symphony of rhythm as your doctor raps over a funky bongo beat. 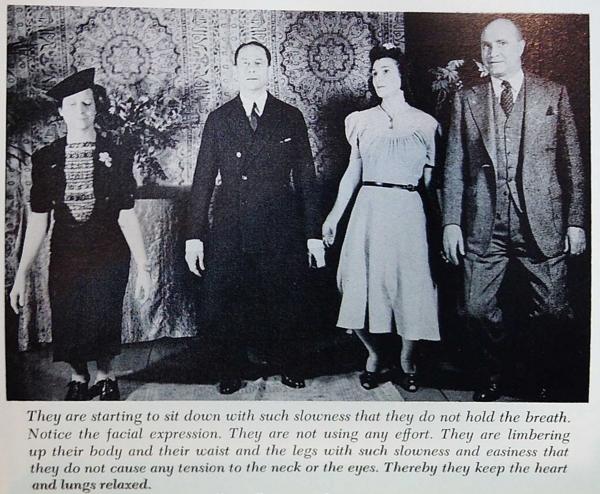 Acharya has a rather severe attitude to those suffering from mental ailments, and elsewhere can be found wistfully wishing he were allowed to cure catatonics by threatening to push them off a roof. Paradoxically the yoga exercises he prescribes are as gentle as can be imagined, one being to lie on the floor and gradually get up, another to "walk backwards upstairs". That his regime is so untaxing may be explained by the character of his clientele, which, judging by the photos taken at his classes, consists of over-dressed middle-class white people far too dignified to assume the Lion or Lotus positions. 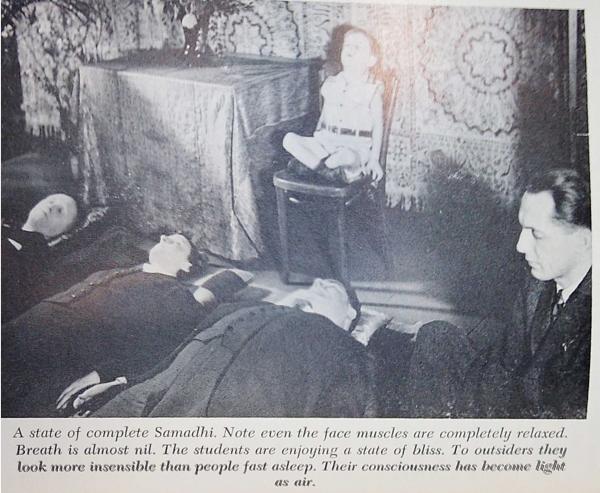 Apart from walking backwards upstairs, one should look after one's insides:

Your saliva has rank poison, cyanide of potassium. Raw potato exposed to the air is rank poison. One drop in the blood will finish you. But the liver will turn such poison into such chemlstry and use it in such a way that it keep up the flow of life. Your liver is the holy of holies. It is on the right side under the ribs. Wiggle it a little.

The heart never rests. It works twenty-four hours a day. Rest it by smiling inside. Don’t fight mother earth. But flee it. Run away from it as a bird does, by a feathery existence. Practically. Not by imagination.

So there we have it. Wiggle your liver, smile inside for your heart's sake and lead a literally feathery existence. Can't you feel your brain regenerating already?

The man on the right in the

The man on the right in the first photo looks like he’s beginning to have some doubts.

They look as though they've

They look as though they've been called to the library expecting the murderer to be revealed, only for Hercules Poirot to enlist them in a lukewarm performance of the hokey-cokey.