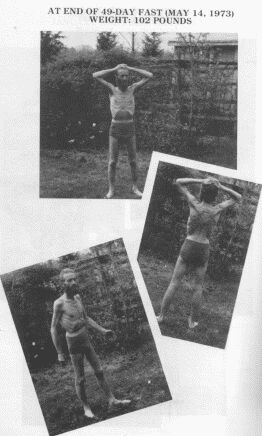 This rather dull-looking paperback book is actually a little gem of oddball literature, with many delights lurking between its covers. It was intended by Johnson that it should promote fasting as a spiritual discipline, with benefits both to body and soul, but he made his case in such an unusual way that it seems hard to believe he won many converts.

“My back started itching...”

After a short and misleadingly rational introduction in which he argued for more research into a neglected subject, followed by a somewhat pointless survey of references to fasting in the Bible, comes his account of his life's journey through fasting, in which - displaying the same dedication to the unvarnished truth as did Boswell in recording his sexual adventures, or De Quincy his experiences of opium addiction - he painstakingly related his dietary experiments:-

My notes indicate that I took four enemas during this fast and that in three of these I had trouble getting water past the sigmoid flexure. (The best procedure here, I believe, is not to apply pressure. Just wait, or quit.) After only a few days of fasting, my back started itching and shortly thereafter a rash appeared, as in some previous and subsequent fasts. Within two weeks I had very dry mouth sensations, but I was not thirsty! I had weak cold symptoms at the start of the fast, including the “almost” sore throat that seems to be a consistent part of much of my fasting experience. At the end of eleven days I reported feeling vicious and vengeful for a couple of days. On the 23rd day I gargled with salt and baking soda in hot water, for a bad sore throat. Two days later I had a good deal of mucous in nose and throat, but the cold, if such it was, seemed remarkably unbothersome and short-lived. I had some urinating trouble - a common problem in fasting for some people, but a new problem in my fasting experience. In another two days I had laryngitis for three days. This was the first time I had had laryngitis in my whole life, so the psychological impact was somewhat annoying, but again I want to emphasize that my mental attitude toward all physical problems was much more relaxed and tranquil than would have been the case had I been eating. I am stressing these possible physical expenences and disturbances of fasting simply for the reader's maximum edification and possible preparation.

This exhausting narrative is continued for many pages. Though at one point it is enlivened by the description of how he was briefly incarcerated in a mental hospital, most of his chronicle concerns his minor physical symptoms and the supposedly beneficial occurrence of Alpha waves. The overall effect on the reader is like being stuck in a lift with a talkative hypochondriac.

“A point in favor of enemas?”

Johnson's talents as a bore were not limited to the subject of his own person. He had read a lot of books about fasting and in the next section he attempted to pass on some of what he had learned. Unfortunately, instead of setting out a reasoned analysis illustrated with passages from his reading, he seems to have felt his rough notes were interesting enough in themselves, so that we are faced with page upon page of stuff like this:-

Page 53 points up the importance of the liver in expelling foreign matter from the body. (This should again remind us of the importance of judicious eating when first breaking a fast and when the liver is very reduced in size.) Page 55 points out that constipation impairs liver function. (A point in favor of enemas during the fast? On the same page we are told that a mucous discharge from the bowels, after 3-4 weeks of fasting indicates the near end of the fast.)

You might very reasonably at this point cast the book aside with a vile expletive, but you would then miss out on its first real treasure, a chapter entitled “Fasting and Immortality Speculations” in which Johnson propounds his theories about why fasting is a good thing.

According to Johnson's analysis, the Parasympathetic Autonomous Nervous System (PANS), the part of our nervous system responsible for relaxation and digestion,

whereas the Sympathetic Autonomous Nervous System (SANS), which is the part relating to fight or flight responses, is associated with negative emotions and thus evil. Fasting, by lightening the load on the (good) PANS, allows it to dominate the (bad) SANS and thus helps God to defeat the devil.

After a discussion of various food fads, in which he suggests that the Romans of today are not as world-domineering as their Imperial forefathers because they eat pasta with tomato sauce, he finally comes to the question of longevity and immortality. Is - as some authors propose - maintaining an acid urine the answer? He is not sure. But he has another hypothesis entirely his own: according to his reasoning, immortality requires a psychic field from which the requisite energy to support it can be drawn:

Within the framework of modern theoretical physics, we have a very anomalous force with which to deal. It is the force we call gravity. To fit neatly into an otherwise symmetric picture that the force fields of physics give us, gravity badly needs an interacting force field. ... Is it not convenient then that we have this other loose end, psychic energy, and the mysterious energy sometimes manifest in fasting to fill this void?

So the psychic field completes the symmetry by being the counterpart to gravity. Of course that must mean that the two forces must be able to exchange energy just as the electric and magnetic fields do, so:

... in fasting we are reducing our gravitational mass and, in the process, tapping extra energy from our mass-interacting psychic field.

All those fat psychics must be frauds, then - and presumably to achieve true immortality you must starve yourself to death.

“A UFO instead of a child”

Thankfully, Johnson did not entirely confine himself to the topic of fasting, for if he had we might have been denied his compelling explanation of the UFO phenomenon:

Now let us note, for its possible symbolic significance, that “entities” in the spirit world, awaiting reincarnation, testify that they search out ideal parents to further their Karmic development. If a “discarnate spirit” found such ideal parents, but was foiled in its efforts at rebirth by birth control practices, could this situation produce a “ghost” before the beginning of life? Having no actual body form, could such manifestations be the “lights” of more primitive UFO's? These could sometimes evolve into mechanical shapes through man's creative thinking abilities. Since I personally doubt the validity of actual reincarnation, I have to offer the preceding as a strictly “symbolic” rationalization, based on the storehouse of reincarnation, UFO, and apparition data that exists in mankind's collective subconscious mind. Thus a couple, feeling guilt about their birth control practice, might draw upon this symbolism to produce the unhealthy alternate creative manifestation, a UFO, instead of a child.

Which explains why traditionally in bad movies the alien invaders are first witnessed by courting couples making out in the back of cars. Across the empty vastness of space they hear the siren call of the condom-captive sperm!

The best is saved for last: at the end of the book, after some pictures of the author in various stages of emaciation, is an Appendix titled “Fasting-Inspired Poetry”, whose contents he kindly placed in the public domain in order that the world might freely enjoy the fruits of his muse. And what a poetic gift is here displayed! Poems not just about fasting, but about beards, bicycles and breast-feeding, many of which can be sung to popular tunes. Here are two of his choicest lyrics, which demonstrate his touch both for meter and meaning.

The Trinity of God

Let us suppose that God is pantheistic,
Embracing all there is to be or know;
And even though it seems not altruistic,
Let symbols help our intellect to grow.
Can we surmise a three-fold God, in one.
A force that's free from time and space-like bounds,
Relate this force to physics now well done.
Explain this force on these familiar grounds?

We know our world is electromagnetic,
With gravity thrown in to more confuse.
We won't fail to note, or here forget it,
We claim a psychic force there's yet to choose.
Gravito-psychic we call these latter,
They finish out the fields we hope to use.
It shows us the spirit, and the matter
One, or the other, we must always lose.

Electric, creating, Father, our King,
Magnetic, redeeming, Son and our Lord,
Psychic Holy Spirit, now new, we bring
And the three together make up the Word.
Gravity's left, with the mass it entails,
A prisoner of time and space, quite unreal,
A fallen force, like the devil, it trails
Behind the Trinity, but trying to steal.

Symbolically done, the Trinity's true,
It reflects the true world that exists;
The world of the spirit, where mass can't go,
(And that's) no matter how hard it persists.
I hope this has helped explain Trinity,
The E-M and psi fields together,
And warned you beware of mass-gravity,
For spiritual man it's a (devil's) tether.

(Can be sung to the tune of “Golden Wildwood Flower”)

A Beard should be grown by a boy, when he can.
When the Beard is full-grown, it will show he's a man.
The Beard is a part of the Almighty's plan,
So grow a Beard if you think that you can.

It will always be there to pillow your sleep.
It will be there to hide in whenever you weep.
It will shelter your face through the thick and the deep,
And show the world that your style's not asleep.

A Beard will protect you from cold and from heat.
It keeps out the rain and the snow and the sleet.
Good folk your bearded image will greet,
But from the “old-fashioned” you may take some “heat”.

A Beard is the style set by Lincoln and Christ.
It will last through the ages and can't be out-priced.
If to evil living you can't be enticed,
A Beard may give you the Image of Christ.