The DDT System of Place-Value Notation 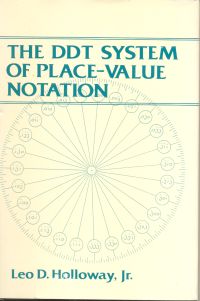 As I have remarked before, many of the authors featured here are retired gentlemen. With retirement comes leisure time and the opportunity at last to lower one's golf handicap, take up birdwatching or write a futile book. Leo D Holloway Jr wisely chose the last option.

Holloway's book describes his invention of a new way to write numbers. Now, this is not an entirely vain endeavour in principle: just as Roman numerals have been replaced by the Arabic system which is much less cumbersome and easier to compute, so it's possible a new approach might catch on in turn. Furthermore, as has been pointed out by many writers on mathematics, the base 10 system we currently use is inferior to some of the alternatives. A replacement system based on the number 12 has been commonly advocated - largely because of 12's divisibility by 2, 3, 4 and 6, as opposed to 10's mere 2 and 5. Systems based on 8 or 16 have also been proposed, as being more closely compatible with computer arithmetic and hence better suited to the Information Age.

However, even such a relatively modest reform as a change to the base used for arithmetic is unlikely ever to be put into effect, simply because its supposed benefits would be relatively small compared to the prohibitive cost of doing so. It would require an absolute dictator of the calibre of Saparmurat Niyazov to force it through.

Holloway's idea is more radical still as well as being probably beyond the comprehension of all but a few autocratic rulers, so the chance of its adoption by even the tiniest totalitarian state is very small indeed.  Of course, it's possible that it might become a sort of Esperanto of arithmetic, taken up by a small band of enthusiasts while ignored by everyone else, in which case I won't have written this web page entirely in vain.

So what exactly is Holloway's idea? DDT stands for "digitally-directed ternary". Ternary means base 3 arithmetic. What the justification for this is supposed to be I don't know as he doesn't attempt to explain his decision. If you wanted to pick a base to be particularly awkward for computation purposes, 3 is a good candidate. Ternary numbers require many more digits to write, are no easier to convert to binary form than decimals, and 3, being a prime, lacks divisors.

Holloway's real innovation lies in his invention of a digit to represent -1. Here's how it works. The letter o means zero,  u is one and n is minus one. These are all the digits you need to write any number, for example: 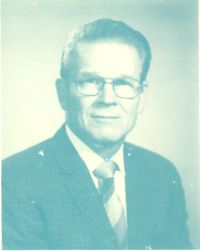 You might notice how some numbers require one more digit than they would in a simple ternary system. This is of course because of the "advantage" of not having to write a sign in front of those that are negative.

Unsurprisingly, the familiar rules of addition, subtraction, multiplication and long division don't apply.  Whether Holloway's arithmetic is easier or harder than its conventional equivalent I cannot say as I haven't attempted to learn it, life being too short. The smaller number of different digits ought to mean that each step of a given computation will be easier, but since the numbers involved will generally require more digits (ternary numbers being roughly twice as long as decimals), there will be more steps to perform.

Holloway further generalises his idea to encompass complex numbers, with the incorporation of digits that represent the positive and negative roots of minus one (j and i respectively), as well as each of the four combinations of these with the real unitary integers,  for which purpose he chose to make his typesetter's life a little tougher:

He provides an example of the long division of ## by iu@, which proves to require some very special mental contortions:

If any test R is nearly or exactly in the same direction as the previous R, and, without question, is greater absolutely than one-third the previous R, then k has been tested at low a place in the quotient. Here, if necessary, k must be "supra-entered" at a place already occupied by a directed digit.

(Or, you could just use conventional complex arithmetic to find the answer, which can be done in a few lines with no need to "supra-enter" anything.)

Holloway suspected that the world may not have been ready for his idea. On the blurb he "admits that many people may find it 'off-beat'", which makes him seem more charmingly modest than most writers of crankish notions. And it's hard not to warm to a man who could write, in expounding how DDT can be adapted to the measurement of volume, this equation:

Thank you for indirectly

Thank you for indirectly encouraging me to check out how to substract in binary. I can now do this and that's mildly cool.
Submitted by Anonymous (not verified) on 01 Feb 2009 - 05:43 Permalink

I am a mathematician. Actually, there are advantages to having a prime as basis--because having divisors of the base actually complicates fractional arithmetic--as was mentioned by the great mathematician Lagrange. Base three arithmetic with a special symbol for minus 1 as a digit is actually the optimal arithmetic system, in terms of efficiency of computation--and this was recognized when computers were first invented--but, binary could be related to on and off switching and to boolean algebra ( see Shannon's master's thesis). Some new chips are now actually designed using this base three arithmetic with the minus one symbol. They are faster chips than the usual ones. However, the book is bad--because the author and editor never did a literature search--the idea is CLASSICAL. Never-the-less, it is not at all a crackpot idea. The longer numerical representations are a trouble, but the increased arithmetic efficiency makes it worthwhile. Of course, today, with calculators--why bother learning this method? If you are designing high speed math coprocessor chips, it is essential. So, in the end--it pays to consult a mathematician before pontificating on mathematics.
Submitted by Alfred Armstrong on 02 Feb 2009 - 11:29 Permalink

All you say about the merits

All you say about the merits of the system may be true - but he was proposing it as a replacement for the base 10 system, for common, everyday use. That's what makes him a crackpot, along with all those who would rationalise spelling or force-feed us a new universal language built on logical principles.

What you say is very interesting, though, so thanks, though it'll take more than your comment to cure me of pontificating.