Extraterrestrial Linguistics and The Secret of Human Origins

Author(s)
Frederick Dodson
Publisher
The Author
Edition / Year
2020
File under:
aliens linguistics we are all Germans now pyramids
In the section labelled
Space Between The Ears 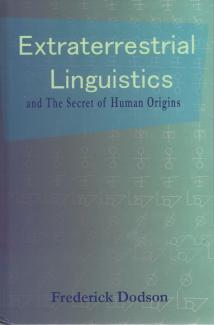 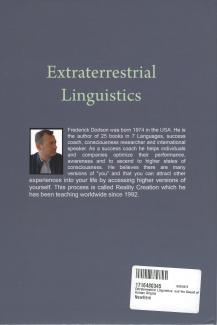 Frederick Dodson, "author, success coach, consciousness researcher and international speaker" claims in this latest of his many books that we humans share not only an extraterrestrial origin but also a common language. Our ancestors, he says, spoke a form of ancient German, an idea Dodson took from a crank called Erhard Landmann.

Landmann is also notable for the claim that most of recorded history prior to the Middle Ages is fake. It was falsified by hostile aliens to conceal the truth of their existence, which incidentally means he can argue that the absence of evidence for his theories is a good thing, as this is exactly what would be expected if they were true.

Unfortunately Landmann's books are not available in English but, if he is correct we should all be able to read them in the original German, shouldn't we? I found learning German quite a challenge at school, but perhaps one has to rouse one's inner alien to jive with the lingua franca, if that is the right phrase. My personal ET must be practically comatose.

Returning to Dodson, before tackling the language issue he is keen that we should know that NASA, the FBI and CIA have since the 1950s been engaged in an elaborate cover-up of the truth about extraterrestrials. Nothing new there, you might think, except that Dodson reckons that the CIA were actually responsible for the spate of flying saucer books that appeared during that period, in a bid to distract humanity from the obvious, that flying saucers are flown, not by little creatures green or gray, but by human beings. Authors such as George Adamski, previously considered to be mere crackpots, were government stooges.

Apparently THEY do not wish us to know the truth, that the "Aliens Are Us". Why THEY have to conceal this is unclear but since Dodson also thinks the CIA created the hippie movement, one might conclude that government agencies exist primarily to fuck with our heads.

One of Dodson's pieces of evidence consists of reviews of NASA taken from Glassdoor. That some employees have complaints about a high level of bureaucracy, poor management, and - most outrageously - having to PAY to use a microwave, clearly indicates that there are sinister things going on. Even more despicably, they never sent rockets to the moon, because space is "full of intelligent life" and if we went up there, this would become apparent. Or possibly, we are in quarantine by intergalactic decree. Whatever, we haven't been to space and we won't in the future.

Having established his credentials as a maverick thinker, Dodson turns to his central purpose of demonstrating the common origin of all languages. This, he suggests, is a radical enterprise:

In 1866, the Linguistic Society of Paris prohibited that any papers on the common origin of all languages be published, From there, the prohibition extended to other countries and the topic has been actively derided in “Academia” ever since. I have read linguists echo this, telling me it's “prohibited” to make word-list comparisons, because there will always be a couple of words that cultures borrowed from each other. They say that these lists create the false impression that the languages are related. But what if | can show all words of disparate languages to be related to one specific other language?

This is rather puzzling, as the construction of relationships between languages is a perfectly respectable academic discipline, and word lists are certainly not "prohibited". On page 35 of Language History, Language Change, and Language Relationship: An Introduction to Historical and Comparative Linguistics (Hock and Joseph, 2009), for example, we find a table of words from Latin, Italian, Spanish, French, and Romanian which illustrates why linguists think these languages share a common ancestor (Latin, in this case). It is not a novel idea to extend this to all languages and suggest that they all have the same origin, but it is generally accepted, for fairly obvious reasons, that if there were such a language it would predate the birth of writing. To assert that the common origin of language is relatively recent is bold, to say the least (and full marks to Landmann for realising history would have to be drastically rewritten for such a thing to be possible).

Dobson devotes most of his book to demonstrating how words that can be found in ancient German (abbreviated to "ag.") also appear in other languages that are seemingly unrelated, such as Aztec or Mayan.

The [Aztec] word Teotihuacan is falsely translated [as] the "city of gods". But if you use a Dictionary of ancient German, the real meaning becomes obvious in an instant. Teoti is the ag. word for "People". But what is Huacan? There are many words that refer to "the gods" and flying devices that end in Huacan. It' s a well-known Aztec word, Remember what I said about "w" and "h" being interchangeable? In that case, it would be "wuacan". In ag. the words Huacan, Uaccan and Waccan all mean "Chariot" or "Wagon" as well as "Movement". Teotihuacan means either "Movement of the People" or "Wagons of the People". The reason the word "Huacan" is continually associated with "gods" flying around in the sky, is probably because the natives pointed upward, to the sky, when talking about the Wuacan, the "Wagons" of their ancestors.

The place where the Germans first set foot was Colhuacan, containing the word "Huacan" for "Wagon" and the word "Col" which is a reversal of the ag. word "Folc", which again, means "People". Essentially, the place where the Mayas landed is called, in modern German, "Volkswagen". I guess the more things change, the more they stay the same.

So in order to properly understand a foreign language, one should first consult one's ancient German dictionary, the only such work where the dictionary-makers did not err. If something looks like it is made up of one or more ancient German words it can be reinterpreted as such. Where necessary, one can invent stories to cover whatever discrepancies result, as you will see in this further example, Dobson's complete report on his investigation into the Maltese language.

The Maltese are like a mixture of Arabic, northern African and Italian. When I learned that the Maltese word “Minn”, means “from” or “of" to describe place of origin, I knew I had to have at least a brief look.

I first looked up the word for Bell, because at that time, I was researching Bell-shaped spacecraft. In Maltese, Bell is qanpiena, containing one of the primary German words for spacecraft — qan, kan, kahn. As we will later see, the Kan travels on a Ray, which in Maltese is Ragg. It is also said to travel on a Pillar which in Maltese is Pilastru. The word Pilastru is an interesting hybrid of the German word Strahl (St-ra-hl), meaning Ray and the English Pillar.

Those are the results of a mere 10-minute excursion into Maltese.

But Frederick, I hear the reader ask, if there are all these aliens coming and going, where do they land their spacecraft? The answer, you will be delighted to learn, is "on pyramids". Conveniently, although not everyone agrees, there are pyramids in Germany.

The Pyramids around the town Sternenfels are called Zwerchhalde and Rohrhalde in the old German of the locals. These are Just two further words that point to Pyramids as landing stations for spacecraft. Zwerchhalde and Rohrhalde are local dialect. In proper German, It’s Zwerg-Halte and Rohr-Halte. Halte means “Stop”, as in bus stop, car stop and other places fur vehicles to rest. Zwerg means Dwarf and Rohr means Tube. The Pyramids, then, are literally called Tube-Stop and Dwarf-Stop. Dwarf and Tube could very well be names for aircraft. The tube could be the pillar-craft and the dwarf could be a name for dwarf-ships that exit the pill or pillar shaped mother-ship. That’s Landmanns explanation, but I also see this possibility: The Space-Dwarves that people see on their hallucinogenic drug-trips, might really exist. I have already gone into detail on them in my previous book. And they might come from the Planet Min, as “Min” is associated with “small”, even in ancient Mythology.

Another ancient German word for Dwarf (Zwerg) is actually “Urkind’, which means Source-Child or perhaps child from the original star system of the Pleiades (child here to be understood as human).

A quick diversion to Stonehenge in England. The rock formation that also keeps getting labeled as “mysterious”. The word is ancient German for Steinhang, supposedly coined by a British Man named Geoffray of Monmouth. But is that really a name? Ge off ray of Mon Mouth is a sentence in an old Saxon dialect: The ray comes from the Moon Mouth. What is the moon mouth? It’s the moon opening. Wait, what does that mean? Well, that’s a topic for another book. If only our education system taught anything real and useful, you'd know.

An early writer about Stonehenge was named John Aubrey, which is Ub Rey, the Ray goes upwards. This is significant because the Stonehenge holes filled with ashes are also called Aubrey. When a spaceship that emanates rays lands of lifts off, it invariably produces Ashes. Or perhaps Stonehenge is connected to rays from the Moon.

Another race of space people is referred to in the common myths of fairies. Fairies actually come from the planet Fe. They like to steal children and even fetuses (hence fe-tus, "tus" being ancient German meaning "exchange"). "Fe" can also be found lurking in the words "feudal", "fecund", "phenomenon", "phoenix" and "fencing", and Dodson provides helpful explanations of each.

The word Phoenix is ag. Fe Nich, which means fairy leaning. What's the import of the word "leaning"? When saucers orbit a Planet, they lean.

Obvious, when you think about it.

Dodson's most interesting chapter is his last one, titled "Counter Arguments", in which he addresses his own doubts, misgivings which are likely to be shared by the reader.

[...] there were times I wondered whether I'm insane. Don't insane people chink they are in possession of some secret and world-changing knowledge that only they, but nobody else, can see? And isn’t the fact that almost nobody would agree with me on ancient German and our origin in the stars, proof that I am insane, that I am seeing connections where there aren't any? And is it not paranoid delusion to assume that all Academia are wrong, and I am right? And is it not strange that Erhard Landmann got no recognition for his work? Isn’t that because he too, is insane?

Perhaps, he wonders, he is suffering from Apophenia, "the tendency to mistakenly perceive connections and meanings between unrelated things.", but he decides not in fact, since he's "avoided being accused of it, by focusing only on the most obvious and undeniable proof". What a relief. As he tells us in conclusion:

[...] for now I am confident that this information can be applied to to make countless other new discoveries. I recommend you go out and use your new and wonderful tool.

If you start from the…

If you start from the premise that there's no such thing as coincidences and that everything happens for a reason, you can end up believing all sorts of nonsense. That's why I hate that maxim so much.

What must it be like to be inside his head? Still, respect for harnessing the discipline to finish a book, even if it is utter nonsense. That’s more than I’ve managed to do. Lol