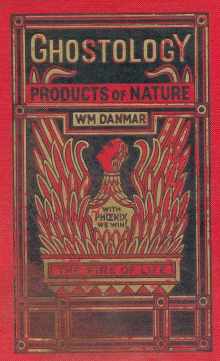 What if all spiritualist mediums are genuine, and the phenomena of the seance are real? Could not these be studied, and a science of ghosts thereby arrived at? Such is the central idea of Danmar's unusual self-published volume of 1924.

What, Danmar asks, are ghosts made of? Future studies would surely shine light on the question:

Since the ghosts cannot penetrate glass, as shown by experiments, the chemists will some day put ghost-substance in their retorts and analyze it to determine which elements, such as carbon, oxygen, etc., went through the organic life-process to become the substances of the ghosts.

(How can we still be waiting for this experiment to be tried? Come on, chemists, get to it!)

If he is unsure what ghosts are made of, Danmar is certain he knows where they live:

In the Earth's shadow above the clouds is the only region where there are "no summers and no winters, no days and no nights" but the everlasting mildness of "heavenly blessedness".

Sub-zero temperatures and the need to travel at a constant speed of more than 1000 mph to stay in the Earth's shadow? That sounds heavenly indeed.

Danmar has a novel explanation for those mediums that have been seemingly exposed as frauds. According to him, it isn't the mediums to blame but bad ghosts:

The reactionary ghosts, "jesuit spirits" as the mediums call them, also make use of spiritualizations in a manner to hurt spiritism by shamfraud. It has been established that light garments can be used for apports [objects that appear apparently from nowhere]. Paraphenalia were in that way apported into a mediums cabinet during the seance to prepare for an expected "exposure" to raise the fraudcry. There was fraud in this matter but it was on the part of the hostile ghosts and not on the part of the mediums who however had to take the blame for it because but few spiritists have been realistic enough to study the real nature of such "exposures".

Thus unlucky mediums, trying to make an decent living by communicating with the dead, are framed by malicious ghosts - apparently these are the shades of materialists and devout churchgoers who, even on the other side after the truth of spiritualism has been revealed to them, persist in their antipathy to it and delight in sabotaging its manifestations.

Danmar likewise turns the common supposition about mediums, that they are mere conjurers dressing up their tricks as supernatural, exactly on its head:

There was a time when that conjurer, Mr. Kellar, was an honest medium and practiced as such. He then became a juggler on the stage, mixing artificial tricks and mediumistic doings, such as some "cabinet spectaculars". He made money. When pressed for an explanation he claimed his tricks as his "business secrets". In New York he said from the stage: "Some people say I do everything by trickery, others say I have spirits to aid me in some of them. All I have to say is that everything is done in a natural way." He lets the fools conclude that spirits, being "supernatural" had nothing to do with it, because they could not do anything "in a natural way".

(This is reminiscent of John J. Donelly's notion that Houdini was assisted by spirits.)

If you are still sceptical, perhaps you'll be more willing to believe some of the helpers Danmar credits with guiding him to the truth:

Unfortunately, as Danmar explains why one of his most frequent spirit guides, Immanuel Kant, failed to say anything interesting or original:

Kant had done his work when living in Königsberg; he was through with hard work, mental or otherwise. No new ideas of scientific value have come from the dead.

The evidence from this and other sources points conclusively to the idea that ghosts, real or not, are dull mediocrities at best. That makes the prospect of an afterlife terrifying indeed, doesn't it? The worst party possible, in a cold and draughty spot - and it lasts for eternity!

I'll bet Kant is a pimp in

I'll bet Kant is a pimp in the afterlife.