The Hands of Children 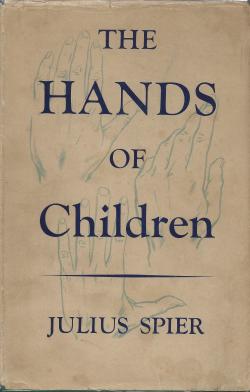 Once in a while, someone manages to persuade an apparently reputable imprint to put through the press an example of execrable mumbo-jumbo such as this. The trick is to dress up your end-of-the-pier occultism in academic garb, to make out there is more to it than such low-brow tosh as Dick's Mysteries of the Hand (yes, that is a real book). Claim to be "scientific", although the work is nothing of the kind, and your average publisher, who read English at Cambridge and knows as much about the scientific method as he does the workings of the carburettor in his Bentley, will take it at face value.

Having a famous name prepared to add a testimonial will help things along, too. In this case it is Carl Jung, also published by Routledge, who speaks up for the work of Julius Spier by providing an introduction to this volume. In a sane world that would have raised suspicions about Jung's judgement, rather than enhancing the reputation of Spier. Sadly, a publisher making a steady income from peddling Jung's collected works to the academic community would probably not be inclined to take too critical a view of him.

Perhaps the most noteworthy thing about this book is that its distinctly creepy title is barely justified by the content. It is not until chapter eleven that Spier arrives at the topic in question, after over a hundred pages that mingle cod psychology with drivel about the lines of the hand like this:

A Mount of the Moon of normal size with only a few lines on it shows a very strong connectedness with nature, and love of animals. A very big Mount of the Moon without any lines whatsoever can mean, according to the type of hand, several things. If the hand is very soft, pale, delicate and has a weak back the person is a drug addict. If the hand is stronger, of reddish colour and has a big Mount of Venus, a large inanimate Mount of the Moon suggests that the person is given to drinking, especially when the little finger is crooked. Such a Mount of the Moon, if combined with certain lines in the hand, can also indicate a person with an overwrought imagination who is possessed by an idea to which he clings with fanatical obstinacy.

I note that a crooked finger indicates a drinker, though that hand position is as popular with those who take tea as tequila.

Chapter eleven, the one about the hands of children, is just over three pages long, then there are twenty-three plates in an Appendix which show handprints of actual children, and these are accompanied by a series of brief commentaries of which this one is typical:

The Hands of a Boy of Fourteen

The right hand shows only a fragmentary section of the Line of Fate, which is completely absent in the left. The Head Line of the left hand is interrupted. The Heart Line ends on a particularly large Mount of Jupiter. Line e indicates great sensitiveness. The boy is mentally backward and a violent stutterer. The stuttering is suggested by the discrepancy between the interrupted Head Line and the high degree of ambitiousness indicated by the Heart Line proceeding straight to the prominent Mount of Jupiter, and the sensitiveness of the boy. 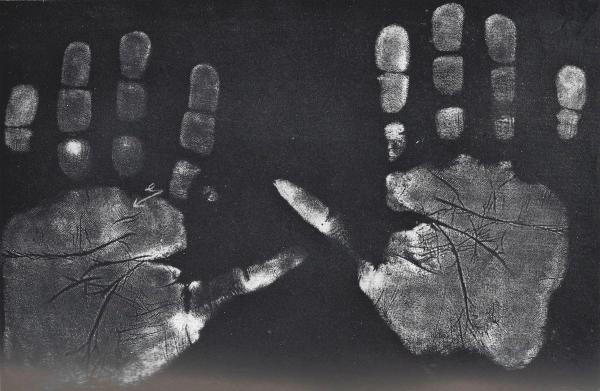 Many of the child subjects are described as "backward" or "imbecilic", suggesting that Spier's sample, as well as being ludicrously tiny, was very far from representative. So much for being "scientific".  And you may fairly judge from the analysis quoted above that Spier made it in full knowledge of the background of the child in question, with no attempt to prevent bias by, say, looking at the hand prints before any detail of the subject's life and condition.

Spier claimed he wrote his book in the hope of helping parents and educators with the task of child development. Here's an example of his advice so you can judge it for yourself:

On the whole, experience has taught us that children whose hands contain a multitude of lines should be trained in handicraft; also gardening is often beneficial. On these children, who are inclined to be capricious, to lack concentration, to fritter away their energies, manual work will have a favourable effect because they will be producing something definite with their own hands and by their own efforts. Moreover, the continuity of their activity has a steadying influence.

This really is the most abomnable piffle, isn't it? Vague advice to parents such as you might find in any middling chid-rearing handbook, garnished with an arbitrary sprig of palmistry that only serves to make it less valuable. "Johnny wanted to help me in the garden but he hasn't got the lines so we are getting him piano lessons instead."

The book is augmented with a further appendix added for the posthumous second edition by someone called Herta Levi, titled The Hands of the Mentally Diseased. This has no less than 46 plates with commentaries, and the best you can say about it is that in no way does it lower the quality of the book as a whole.

I am sure Spier was utterly sincere but judging from this, his only published work, he had no understanding of what a truly scientific approach to his subject would entail, if such a thing can be imagined at all. Despite all the trappings of weightiness, ultimately there is nothing in it to raise it above the works of Cheiro or Eva Petulengro.

But is there a book called

But is there a book called Hand's Mysteries of the Dick?

I knew right away that this

I knew right away that this was the handiwork of a quack!