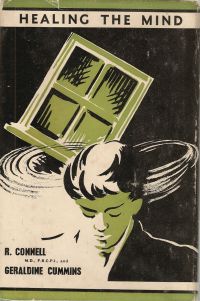 If there's such a thing as ESP, then surely it can be employed in the cause of psychotherapy. That's the idea behind this book, and if you believe in such phenomena it might seem attractive. Before letting a self-styled psychic recommend treatment for actual patients, though, wouldn't it be wise to check whether they indeed possessed the abilities they lay claim to? You'd think so, wouldn't you?

"Well-known physician" Dr. Connell - his identity masked by a pseudonym to avoid the wrath or scorn of his peers - had no such qualms. Given the experiments of J. B. Rhine, he said, the existence of Extra Sensory Perception is an absolute fact. Even if this were the case - and the value of Rhine's work is hotly disputed - someone's ability to guess the value of a hidden card surely does not mean they are any more qualified to diagnose or treat a mental illness than anyone not so gifted.

(Even so, Rhine's work, if accepted as valid, could be useful as a baseline measurement of psychic ability. Wouldn't it be sensible for psychics to have to take a Rhine test before they can practice, like a sort of driving license?)

In choosing a psychic to work with in his researches Connell appears not to have used Rhine's method or any other to verify the claims of potential candidates. Instead he tells us that his selected co-worker Geraldine Cummins is, like him, "well-known", and that she has established a "permanent reputation" by a series of "remarkable publications".

Leaving aside the question of whether having written some books constitutes a qualification, how did Ms Cummins actually do? Really, there's no way of telling. According to Connell, almost all the cases he describes have a successful outcome but the sceptical reader may wonder whether how much was actually achieved by any psychic insight.

Most of the case-histories have a similar pattern. The patient is suffering from some form of anxiety disorder, such as a fear of aeroplanes or a choking sensation. Ms Cummins, does not meet the patient but simply reads an example of their handwriting or handles an object "closely associated with the individual" before making a diagnosis in which she generally attributes the problem to "race-memory": one or more ancestors of the patient were subjected to some form of extreme event associated with the symptom, such as death by asphyxiation. If the crucial event is not ancestral, it is invariably a repressed memory of childhood.

In either case, in suffering the symptom the patient is subconsciously recalling a buried trauma.  When the patient is presented with the explanation - often accompanied by a lengthy description of their supposed ancestor's psychically recovered history - they are satisfied and at once cured.

An outstanding example is that of a doctor, who is suffering from a peculiar complaint, very common I am told in certain of our cities, as he reports in his own words:

My first insight in my disturbance was when I discovered a sexual interest in men, not in women - and it was only after considerable analysis that I began to realize how very much wider the problem was.

Cummins, finds an unusual cause for this chap's "problem": the persecution of the Huguenots. Apparently, during that period the patient's ancestors lived in Flanders where they were subjected to various indignities at the hands of a cruel nobleman, a Catholic convert. These terrible events were stored in the subconscious memory of the patient, where they were compounded by his having been smacked for playing with his todger while a baby.

AT first, having these astonishing facts revealed to him brought great relief, as he says:

I am a living man in every sense of the word. I am through my gifts superior to the mass of men. I am able to express myself not only in work and in art, but in sexual life completely. I am no longer the victim of the false religious fears of my ancestors, or of the furtive infantile shame.

A few pages later, though, he has changed his mind:

I do not feel better, in fact I feel much worse ... I feel numbed and without life, haunted by an unknown something that I cannot place.

Connell follows standard practice in such circumstances, which is to take credit for successes and pass the blame for the rest:

It is suggested that the patient had become what might be termed "a psycho-Analysis addict" long prior to the ESP investigation. His case should not have been attempted.

Setbacks like this do not by any means diminish his keenness, and by the end of the book he is advocating that every university's psychology department should create its own team of "sensitives", bent on uncovering the race memories of unhappy subjects from specimens of handwriting or their golfing umbrellas .

Strangely, Connell's enthusiasm for the employment of crystal-ball gazing charlatans in the field of psychotherapy has not been, to date, widely shared by his fellow medics. In these times of tight budgets, though, perhaps a system in which patients can be diagnosed at a distance by unqualified nitwits might finally find its place. But since it would be even cheaper and just as effective to treat them by following their horoscopes in the daily paper, that's the more likely future of psychiatric medicine.

*Looks at the rather cute

*Looks at the rather cute cover* It's the TARDIS! In 1957! The artist was evidently the only person here with precognitive powers.

Homosexuals, Huguenots. What the heck. They all begin with h. Screamingly funny, Mr. Armstrong!
Submitted by JKG (not verified) on 05 Oct 2009 - 22:44 Permalink

"Lobotomy, anyone?" Thanks, but I'm trying to give them up. Do have one yourself, though. Or a magnesium pill.
Submitted by Anonymous (not verified) on 05 Oct 2009 - 19:31 Permalink

Ya gotta love Posters that

Ya gotta love Posters that deride& dismiss stuff with a curt comment, sans giving the subject& it's author,who has devoted years on research, even a bit of consideration ...ah,the Power of the Ego! Would that the rest of us could live in such a black&white world. Lobotomy,anyone? BTW, please take a look at: http://www.moodfoods.com/magnesium-antidepressant.htm http://www.suite101.com/reference/magnesium_deficiency
Submitted by Alfred Armstrong on 05 Oct 2009 - 20:58 Permalink

You win a prize for

You win a prize for pretentious use of the word "sans" and irrelevant linkery. Also for half-wittedly defending a book I doubt you've read.

Are you by any chance the same idiot who took me to task for knocking Mussolini?

This book's a hoot - if it wasn't so alarming. It reminds me of the quacks who took me for lots of money during the nine years my bipolar illness was misdiagnosed. One proposed to "regress" me by hypnosis to a previous existence to enable me to stop myself being burnt at the stake as a witch. Thank God I still had my wits about me enough to say "thanks, but no thanks". And all the Chinese herbs gave me was an upset stomach and a ruined saucepan!
Submitted by Lord Kefka (not verified) on 29 Sep 2010 - 21:23 Permalink

Ha! Your experience with the

Ha! Your experience with the hypnotist is strikingly similar to the plot of a movie I watched recently. It was a Mystery Science Theater version of The Undead in which a hypnotist regresses a girl back to her past life where she is about to be executed for being a witch. http://mst3k.wikia.com/wiki/The_Undead Its playable on netflix or you can watch it here: http://retrovision.tv/freevideo/mst3k-the-undead/ Seems appropriate since this site is a bit like mst3k for books.
Submitted by Ian Kearey (not verified) on 05 Oct 2009 - 11:26 Permalink

As a sufferer from chronic

As a sufferer from chronic depression, I needed a lift this morning - and Dr 'Connell' has given me just that. Away with the medication and CBT therapy: it's ESP for me from now on! Dear God. Oy vey.
Submitted by Alfred Armstrong on 05 Oct 2009 - 13:02 Permalink

Glad to have been able to

Glad to have been able to bring this useful information to your attention, Ian.

Sounds very much like old man Hubbard and his nonsense about engrams (memories accompanied by pain) causing most illnesses. Incidentally, Dianetics was written seven years before this book. Could it be that...? Naaaah. Or could it?
Submitted by Alfred Armstrong on 05 Oct 2009 - 12:48 Permalink

Mining a common seam of

Mining a common seam of daftness, I think, Francois.