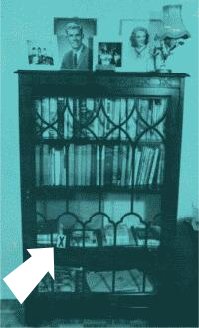 It was on an evening in 1981 when 9-year-old Sharon was staying with her grandfather, retired Bell Telephone Laboratories engineer I. W. Whiteside, that she noticed curious patterns of coloured light seemingly being projected onto the bookcase shown in the picture (to which I have added an arrow pointing to where the lights appeared). She called her grandfather's attention to this eerie phenomenon, which they watched for some time; different patterns - of circles, rectangles, and other geometric forms - came and went, all with no apparent source.

In a stunning piece of deductive reasoning Mr. Whiteside concluded that the lights must have been a coded message of extraterrestrial origin. Eager to learn what the spacemen had to say, he set down what he could remember of the pattern of lights and started trying to decipher it, thus:-

With these facts, it was obvious that colors and geometric figures had something to do with a code. I concluded that if anyone was trying to give us a code, the digits 0 to 10 would be the most likely objects they would try to teach us.

How many fingers do aliens have? Or, if they know we use base 10, how come they don't know our symbols for numerals? Whiteside ignored such trivial questions and ploughed on, coming up with a code of a childlike simplicity, one in which some (but not all) of the figures represent a digit, by counting up the number of geometric shapes of which it is composed and adding the number of different colors used (not counting white). I think. But an orange circle with a white triangle at the centre is a zero, for reasons I don't understand - except that it was left over once he had decided what all the others meant.

Some while later little Sharon, obviously the more talented of the two, looked over Whiteside's notes and pointed out they were in error; in particular his drawing of figure C was greatly oversimplified. He studied her corrected version and lo! he realised it was a representation of the multiplication table for the number 4, just the sort of useful thing to be communicated to us by aliens from Outer Space. 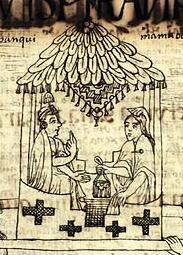 Encouraged by his early triumphs in decoding, he started seeing similar ciphered messages everywhere he looked. Ancient monuments and pictures in old books alike turn out to be concealing SECRET MESSAGES - though, to my mind rather disappointingly, each time the messages turned out to be simple pieces of arithmetic. The space aliens, or whoever it was scratched these graffiti, appear to have been simple souls excited by the games they could play with sums. “Hey earthlings, look:- “

(Never mind base 10 - they seem to give a different priority to their arithmetical operators, these aliens. Do they not know BODMAS?) This example was decoded from an illustration to the chronicle of Huaman Poma de Ayala, where the 'message' is hidden in the leaves used to cover the Inca's sedan; the relevant detail is shown on the right. Who would have guessed such an occult secret could be concealed in so innocuous-looking a picture?

To help you appreciate the true character of this little book, of which I doubt you'll ever see a copy, here's a whole chapter - perhaps the most significant one for the future of our planet:-

After Sharon and I had the two-hour encounter with outer space in our home, we were able to record every detail by virtue of Sharon's photographic memory. From these recorded details, I was able to develop the Sharon Code. The code being relatively simple, naturally I wondered why earthlings were so long in getting it.

We know outer-space people have been trying to contact people on earth for many years. We know they are infinitely smarter than we are technologically, so I think it is reasonable to ask why they didn't come up with some simple scheme to communicate with us or even learn our language. 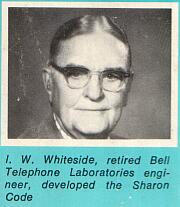 After much thought, I concluded that these people have computer brains and laser-beam eyes. I also concluded that they knew we had mastered computer techniques as they were used on earth in many instances: automobiles, airplanes, satellites, and the like. Under the circumstances, I guess it is not unreasonable for them think we, too, had computer minds. How were they to know our computers were detached and located in the office or laboratory?

With this basic assumption, it is easy to understand why all of their earthly encounters (except ours) have gone astray.

For instance, in one case they displayed a six-foot, multi-colored, complicated design on the bottom of a 100-foot-diameter spaceship hovering ten feet above a man out in an open field. Only a computer mind coupled to laser-beam eyes could record enough details from this situation for a successful code development program.

In developing the Sharon Code, my granddaughter and I apparently were exposed to the same complicated figure along with four other figures. I guess they suspected we were dumb because the designs we got were in the font of beautifully colored two-inch-diameter discs displayed many times on a glass bookcase door only three feet away from us. With all this help, it still took Sharon and me several months to develop a code from the details gathered in the two-hour encounter, and we still are learning many new things from it.

One simple way of approaching this problem is as follows: We have the Sharon Code, which includes the outer-space digital code for digits 0 to 10 in rectangular or circular form. The circular code in color easily could be displayed, say, for instance, at all NASA base stations equipped with high-speed cameras and computers, which local personnel could use to good advantage after a very elementary course in UFO technology and the Sharon Code.

After reviewing many reported UFO sightings, keeping in mind the Sharon Code, it appears that outer-space signals are being sent:

It is probable that the pulsing lights may well be sending signals made up of colors and geometric figures. Even the five figures which we received in slow motion easily could have been transmitted rapidly, as they were obviously lighted by laser beams.

After a number of stations have displayed the circular digit code 0 to 10, or some other identity, the same figure could be displayed on satellites or space shuttles just to notify outer-space people that we at last know something about their code.

In the past, UFO encounters have been peaceable, but fighter planes have tried to shoot down UFOs, and hunters also have shot at them. So they don't stay very long in one place. Once they get the message that we are friendly, contacts with a station might be for an extended period. After all, they have landed on earth many times, according to records. Maybe sometime in the future they will land at one of our bases. One day, on a spaceship with data which we collected in developing the Sharon Code, we could teach them our language. Teaching a foreign language to one with a computer mind shouldn't be too difficult.

A station without a high-speed camera for recording purposes should not display the Sharon Code. In this case, a contact with fast signals would be a catastrophe.

“Computer minds and laser beam eyes”: just the sort of aliens we would want to converse with, obviously. We could teach them the Inchworm song!

I first put the above review online in mid 2003. In December 2004 I got an email from I. W. Whiteside's son Bobby (a man who has had a significant career in music). He was able to give me some further insight into his father's character, which, when considered, makes his authorship of this book even more baffling:

My father was a man of incredible foresight and a pioneer in many ways - he was an engineer at Bell Telephone Labs (Lucent) in the days of the transistor, the satellite hookup, the transatlantic cable and the watts line etc., etc .... He put 12 $5.00 alarm clocks together and by clocking long distance calls he was able to save BTL hundreds of thousands of dollars in phone bills... (just one of his feats that his bosses took credit for). He wasn't a power hungry guy - just a tremendous innovator who took pride in the things he was able to formulate. We never figured this whole thing out, but my father was a quiet guy who retired with a $12,000 salary, amassed an estate of a couple of million... Had his hip replaced at 79 so he could play golf and still played the market and made money when he died at 93 ... So who's crazy - we may never know but ????

Anyway - I'm glad I was the benefactor of some of his creativity ... at least he made you think!!

He also added in a further email that:

when my father first saw those patterns, he did everything to try to get rid of them... turned off the lights, closed the blinds, looked for reflections, etc., etc.

So we now know that Whiteside was not simply crazy; and the mystery of Sharon's UFO Code - surely one of the great enigmas of the 20th Century - remains intact.

The code is good, well

The code is good, well thought out and put together, however these lights patterns and shapes are not numbers, they are words... well letters to be percise. When we speak in our own launage we speak word to word, yet when someone deprived of the ability to hear speaks they use visual words and in many cases letter to letter, I.e. my name is A-l-a-n-i. When a def person watches TV, they again experience visual speech, in this case Subtitles, again, letter to letter. Universal beings work in math and the like much as we do, problem solving and science. I believe you about the lights and shapes, you must look again at the code, these are letters and symbols. In short, we are cave men to them, if I were to travel to a place where homosapians still dwelled, I would speak to them in cave paintings etc, I would assume their math to be a lesser level (I.e Stephen Hawkins vs Peewee Herman) thus in regards I would be reluctant to show them my skills is numeracy instead I would speak to them in a way that they may understand or at the least the most simplyfied way I could, letter by letter. Decifer the letters, decifer the message, it is clearly one of importance.
Submitted by FrancoisTremblay (not verified) on 11 Aug 2018 - 07:56 Permalink

Hey, whadya got against Pee

Well I really love the idea

Francois, if you want to

Francois, if you want to login before commenting, there's now a link in the sidebar you can click on to do that, just below the search box.

You'd think space aliens would be smart enough to transmit this vital communication to more than one individual. And a lot bigger than that, too. I guess my question is, why would they even bother? (also, how do I login? I got a message saying "The name you used belongs to a registered user.")
All comments