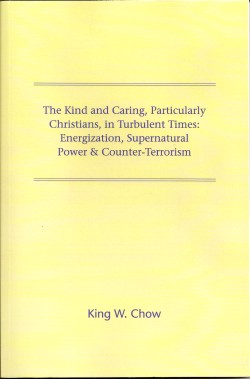 Too many authors choose snappy and memorable titles: not King W. Chow, though, who wisely picked comprehensiveness over comprehensibility.

Chow's message is one of urgency: written shortly after the outrages of September 11, 2001, it is a call for those he terms "The Kind and Caring, Particularly Christians" - people of good will, in other words - to take positive action against terrorism through the use of "the energization method", a series of spiritual exercises.

In the following pages, I am to report on my experience in enhancing an empirical methodology, which can readily be mastered by sane and rational persons. As some of the details may sound astonishing and unscientific, I believe establishing my credibilty as a sane and rational being here is paramount.

He goes on to list some impressive academic qualifications in social sciences from the University of Texas in Austin, culminating in a Ph. D granted in 1984. At the time of writing he was:

A member of a higher education institution in Hong Kong, earning more than US$130,000 a year.

He has written on "political science, public administration, public policy, public management and education", published a number of books and papers and contributed to various journals and academic groups. In short:

Readers should at least subscribe to the idea that I am not a crazy person or a crook.

(I don't know that we should, but let's read on before making up our minds.)

In 1991, Chow went with his wife Irene to Taiwan for a week's course in Qi Gong in the hope that it would improve her health. They continued to practice, but one year later started to notice odd results:

I began to feel and see things - feeling someone being around and seeing what we would call "ghosts" (i.e. beings in energy form). Two years later both Irene and I could see, hear, feel and smell beings in particle form, be they (the so-called) ghosts, demons, angels, fairies, or holy spirits. We could also communicate with them, and in some incidents clashed with "ghosts" and "demons" when we noted that they tried to hurt other beings, particularly human beings. We also found out that we have a particle being in our molecular body.

Irene and I had incidentally got trapped in the interlocking zone of the particle, molecule, and social worlds.

Apparently this experience is a result of doing Qi Gong properly. Most people fail to master it and practice it consistently, so they don't start smelling ghosts or get trapped in the interlocking zone of the particle, molecule, and social worlds. Since it's unlikely that the reader is familiar with this last concept, Chow provides a detailed explanation in the form of 28 propositions, which may shed some light on the matter - or possibly not. Here's his proposition 1:

Particles are in essence manifestation of energy derived from particular patterns on interactive forces - in other words, there are no such things as particles, but we could note their existence only in circumstances where certain conditions are present.

To summarise the remainder of his propositions: by "particle" Chow seems to mean something like soul or spirit; most people are "inbound" - a term which seems to represent something like a state of sin - and a few are "outbound" - good or holy. What on the surface resembles a scientific terminology is in actuality theological:

With this in mind, then how should the US administration respond to the threat of terrorism as exemplified by 9/11? In answer, Chow says there are two possible scenarios, the first of which is eerily prescient:

A senior staff [sic] in the Department of Defense might for no good justification withhold critical information and as a result succeed in misleading the President to make a seemingly noble, but in essence evil, executive decision, eventually killing hundreds of non-Americans: a totally rational President could abnormally make an unnecessary invasion decision, causing the death of many American soldiers.

As for the promised second scenario, with characteristic vagueness he omits to say what precisely it is, but one may infer that he believes that a new strategy is inevitable, a key component of which is a sort of spiritual version of SDI:

Prime terrorist targets, such as the President and the White House, need to have inbound molecule detection systems established to detect the pre-strike signals.

This will require a new force of "national guards", who will practice Chow's energization method and become spiritually super-powered. The method itself consists of 19 steps, the first of which is simple enough:

Procedure 1
Put on the tracksuit and go to your church at night or by dawn when there are few people around. (Warning: if your church is located in a high crime area, choose another church but only for the purpose of energization.)

In the instructions that follow one is enjoined to breathe, pray, repeat certain phrases, "walk like a drunk", cross one's fingers, and thank God. Powerful stuff, to be sure.

Chow is commonsensical enough to recognise that not everyone will be up to the job of being a national guard, so there'll also have to be a system of performance appraisals as in any other sphere of employment, to be carried out by expert panels using exercises such as the following:

First of all, the qualified recipient stands at ease and has eyes closed, and then his or her peer (who has not practiced the energization Method) will shout "Back Off!" at him or her 10 feet away.

If he or she can feel a push from the shouting and walk backward, swiftly but naturally, then he or she has been energized to the state that external force can be detected - sound wave itself cannot push the person; it is the power that comes from the heart of the peer (when he or she shouts) that pushes the qualified recipient.

Some might question the rigour of this process, but they probably don't earn $130,000 a year.

Looking at the state of things as it is now, would things have been better if the Americans had followed Chow's advice instead of invading Afghanistan and then Iraq? A strategy no less sane and rational, one might think; and potentially a lot less bloody. Let's all go to local churchyards at night to walk like drunks - as many of us already do - and the world will be a much happier place.

All this and staring at ghosts...

Theosophy lives! This gobbledegook reads much like Blavatsky's - but she did know how to make a catchy title.

Ah, haven't read Blavatsky for a very long time but you may well be right.

Of all the bizarro titles on this site, the winner still has to be "Man v' Ape in the play of Ear-Ce-Rammed"

Yes, and I expect it to continue to lead the field!