The Legend of the 10 Elemental Masters 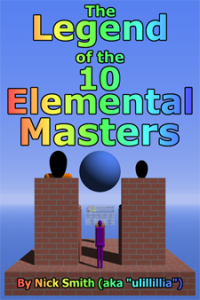 The Legend of the 10 Elemental Masters is the only work of fiction I have encountered which takes place entirely inside what appears to be an old-fashioned, somewhat crappy, computer role-playing game. The author is well known in certain circles for his unusually obsessive attitude to such games, and this book is the literary flowering of his fixation.

It is not much like Jane Austen. More numbers, for a start. Lots more. Colours are described not through simile, but through their hexadecimal values as used by computer programmers. For instance. here's how we meet Smith's hero - whose name may be familiar to those who have wasted happy hours battling Dr. Robotnik in the persona of Sonic the Hedgehog:

Knuckles resembles a human, but with differences. Knuckles is neither male nor female, though referred to as a "he". Three-quarter-inch-thick dark-violet-colored (FFA000E0) fur covers his entire body. He is only 25 1/3 inches tall, 4 inches wide and 2.5 inches deep. Knuckles gets his name from his large hands, 40% bigger than a human his size would have. A reflective, glittery greenish (FFA0FF00) haze a half millimeter across borders his pupil. Knuckles has no nose and a mouth 2/3 as big. Every other aspect of his is that of what a human would have for his size.

A fairer comparison than Jane Austen would be to Ian Fleming and his descendants, with their insistently precise identification of weaponry and ludicrously able protagonists. Like a violet-furred James Bond Knuckles is able to defeat his every opponent, though instead of spitting lead from a trusty little Beretta he wields some mighty spells:

Where Fleming would have a sex scene, Smith has pizza with an extra topping of nerdy social awkwardness.

Ivan: Mountain Dew or Mello Yello, whichever you have.

Tu: I want what you get when two atoms of hydrogen covalently bond with one of oxygen. That is, water.

Tyler: Sprite or 7Up, whichever you have.

Knuckles: I never need to drink anything, nor eat anything.

Waitress: Do you know what you want to order?

Knuckles takes a coupon out of his chest and hands it over.

Knuckles: Erik Ramstead Middle School gave two of these to them at the graduation party.

Waitress: Okay. What do you want to order?

Tyler: I want a thin-crust pepperoni pizza. Could I have an extra topping of pepperoni, though?

Waitress: You'll have to pay for the extra toppings beyond what the coupons allow.

Tu: I guess I'll go with pepperoni as well. Then again, split it between half cheese and half pepperoni. Although I would prefer thick crust, I wouldn't mind going with a thin crust.

Knuckles: Basically, then, have one pizza a cheese-only and the other as pepperoni. Tu will get one third of each while the others get two-thirds of their type. That way, it's fairly split and easier to make. I'll pay for the second pizza, drinks and the extra topping.

Tu: I can agree with that. You're smart!

Unfortunately the ensuing peaceful munching of hot bread products is interrrupted by the workings of an evil force and one of the waiters is struck down. Fortunately Knuckles is able to help:

Knuckles casts "heal11" on the fallen waiter. A brief-case-like first-aid kit 18 inches long by 12 inches tall and 3 inches deep fades on over the waiter in a half second. In red, and centered, "first aid kit" is written above a "plus" sign. After a hald second, the kit opens in a half second revealing various things found in first-aid kits like band-aids and various medications. The kit remains open for one second and fades away in a half second. When the spell's effects start, a green "cardiac arrest" and "flu" pop out of the waiter and he gets up as if nothing happened. Knuckles casts "cure" on the waiter. A green "257" pops out.

Compared to many of the books reviewed on this site, the Elemental Masters is actually a pleasure to read. Smith may be odd in his preoccupations but he is neither hate-filled nor delusional, which makes a welcome change. The humour to be found in his book may not be intentional, but for once it's not due to idiocy, simply to his unusual way of thinking. I recommend it.

Buy The Legend of the 10 Elemental Masters from Lulu.com.

(Many thanks to regular correspondent Francois Tremblay for suggesting this one).

Hahahaha. Thank you so much

Hahahaha. Thank you so much for writing this review! Not only am I thrilled to see this wonderful book reviewed, but I finally was able to have some input for your wonderful site. :) If I ever find any great books like this, I'll make sure to tell you. Also, why did you not review the story... such as it is?
Submitted by Alfred Armstrong on 30 May 2011 - 23:22 Permalink

Thanks Francois. As for the

Thanks Francois. As for the story ... I'd love to do a synopsis but I think my FFD3D3D3 brain would melt and require a "healing100" spell to recover.

But who could know about this

But who could know about this book without such wonderful characters as Lalightalent and Larockalent? XD (glad to know your brain is opaque: any other opacity level would have been worrisome)
All comments