A Love Letter to Charlotte Church 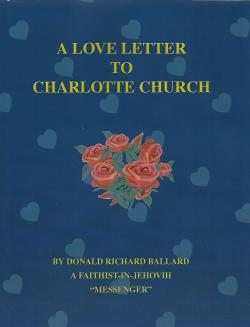 A love letter may be a powerful weapon in the battle for the true one's heart. What more personal, more sincere, more heartfelt medium for the expression of one's deepest feelings can there be? A few carefully chosen words put to paper may be more effective than any number of swimming pools full of rose petals or other supposedly romantic gestures.

Thus Donald Richard Ballard, brave in his folly, selected the means by which to woo the angelic Welsh singer Charlotte Church. Some might have considered it quixotic for a man of sixty-seven years to aim at a girl of merely sixteen as she was at the time, but true love laughs at all barriers.

For while other suitors might have more attractive faces, straighter limbs, sweeter breath, fatter purses, more abundant locks, clearer eyes, firmer haunches, whiter teeth, smoother skin, flatter bellies, mellower voices, livelier gaits and quieter digestive tracts, these vaunted advantages were as nought compared with Donald's singular rare gift, that of WISDOM. As a man learned in the great book Oahspe, he could offer Charlotte Church not just earthly delights of the flesh but guidance in the ways of Jehovih, the creator.

(In case you do not know, Oahspe is a newer and better Bible, written in the 1880s by John Ballou Newbrough, a New York dentist, by means of that process known as automatic writing, in which spirits from other dimensions communicate celestial truths using the abstracted mind of a human as a kind of pantograph. Oahspe is a work of demanding proportions, full of arbitrary neologisms such as the renaming of Jehovah to Jehovih, that to a casual reader may seem drearily turgid and nonsensical, whereas on further acquaintance it reveals itself to be nonsensically dreary and turgid.)

The education of a young person is a sacred trust, and one that Ballard took most seriously. In his letters to Charlotte he proffered advice on diet, sex, religion of course, his dreams and their meanings, folksy lessons taken from his own long life, and which are the most instructive web sites. He recounted his plan for something called the "FTC":

It is the initials of an organization that I am planning on launching as soon as I can get the foundation laid. Because this name has yet to be trademarked, I will keep it to myself.

BRIGHTEST SPIRITUAL LIGHT TO EVER SHINE ON THIS PLANET THAT JEHOVIH AND HIS HOLY ANGELS CALL, THE RED STAR.

He often employed a form of Socratic dialogue in which he and a ventriloquial Charlotte Church would chat about his various preoccupations. He insisted her he was not after her money, not even for the FTC, but instead wanted her to come and work with him on it and be his wife.

Charlotte: Don't you think you are a little too old for me?

A good question, to which there is a better answer.

Donald: Jehovih says that the best children ever produced on earth are between two people where there is an old man and a young girl. ... when an older male mates with a young girl, both of their sexual energy is mild and the offspring are on a higher spiritual level because of the low sexual interest at conception.

Sweet are the tender words of love.

The FTC would be funded by the selling of copies of OAHSPE and other more newfangled means:

Donald: By making money on my computer.

Charlotte: You can make money on your computer?

Donald: Yes, I can make money on my computer by writing books for one thing but there are numerous ways a person can make money on computers. A book named "101 Internet Businesses You can Start from Home" by Susan Sweeney, C.A. is a good book to read on that. Another one is "Making Money With Your Computer at Home" by Paul and Sarah Edwards.

That Charlotte Church did not succumb to these honeyed words is a marvel and a mystery. Such style, such discernment, such crystalline perception! But she scorned them, and even more tragically ignored his advice as to the direction of her career.

Donald: An exquisite voice should sing exquisite songs. When you don't sing the right songs the proper vibrations are not there. Those celtic songs and lullabies are without a doubt the most beautiful songs I have ever heard in my whole life. Charlotte, in heaven they do not sing pop songs or listen to rock music. What I am about to say here is the truth because of what I have learned by reading Oahspe more times than I can count. Those celtic songs and lullabies would be songs that the angels would sing in the high heavens.

No pop songs, no opera, just "celtic songs and lullabies" or show tunes from the 30s and 40s, which were of course not written by people on drugs (pace Cole Porter and "some get a kick from cocaine..."). Furthermore she should keep away from booze and pubs and not wear sexy "cloths" as Donald endearingly put it. To anyone who has been following Charlotte Church's subsequent life and career, it will seem that If Donald said "don't do it", she damn well went and did it.

Poor Donald. What could he do to win a young girl's heart? He had sent her material that in book form amounts to almost 500 pages of bizarre ramblings, laying out his views on politics (conservative, Saddam had it coming), science (evolution is tosh and so is vaccination), diet (eat nuts and drink nettle tea), abortion (it's bad), atheism (also bad), Christianity (wrong, superseded by Faithism, the religion of Oahspe) much of it in ALL CAPS for added expressiveness, but she was not moved even to acknowledge his blandishments, still less be swayed by them. Despite all the dreams, recounted at length, in which Charlotte Church featured, in real life she remained out of reach.

Even his romantic offer of a stay in a "cabin in the woods" was ignored.

I want you to come over here to America and spend one year with me, in a home, in the country, far from the cities and bars and night clubs and the junk food and the people you are associating with now. There is a window of opportunity open to you Charlotte.

Someday we will talk about this, either in this life or the next.

Donald Richard Ballard's blog about Oahspe, which contains some of the same materials as this book, though little about Charlotte Church, can be found at http://esfoma.blogspot.com/.

I'm guessing the "not a crazy

I'm guessing the "not a crazy person" tag is tongue in cheek?