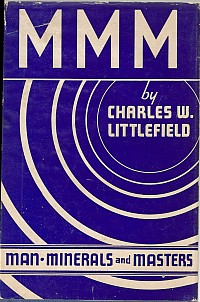 "All illustrations in this book are photographs of MENTAL PICTURES"

As a boy, Charles Littlefield ("author, scientist, physician") had a wounded foot miraculously healed when a man called George Washburn recited a "certain passage of scripture, with some substitutions". This experience led Littlefield in adult life to investigate how such charms did their work.

Drawing on the (uncredited) work of the quack Schuessler, Littlefield's researches gave him the idea that mineral salts in the body could respond to mental transmissions. They would do so by forming images of mystical import (the "mental pictures" mentioned above), visible through the microscope, which could not merely stop bleedings but were actually the root of life.

"... while making some experiments with the twelve mineral salts of the blood, endeavouring to discover the relation between mental states and those salts that produce clotting in case of hemorrhage, a living octopus was produced."

The discovery of these strange microscopic phenomena might have made an interesting account in itself, but Littlefield goes much further. At first, the images he saw were somewhat limited in nature, coming simply from his own experience or the Bible:

... the mental images were either those of of [the writer's] own creation such as the "fowl" and the "overshot water-wheel saw-mill", or those taken from The Book, such as "the Holy Spirit in Creation" and "Mount Zion".

But then, he says, he experienced a series of visions in which he was initiated into occult secrets by no less a trio of personages than "the three Wise Men who visited the new-born King of the Jews in Bethlehem of Judea". This is only fitting for one who is, as he immodestly implies in another passage, "a true prophet or seer", just like those of the Old Testament.

These three Masters who initiated him are simultaneously themselves Old Testament figures. In time-honoured mystical tradition, Littlefield does not let the bounds of time and space constrain his visionary purpose. The first of the three is Ezekiel, who admits to being rather older than he looks, as he says of himself:

"The continent of Atlantis was the place of my last manifestation in the flesh. This was centuries before the building of the Great Pyramid. The language my people spoke was Zansar, very similar indeed to our present English, It was then a universal language, and as such had nothing in common with any modern dialect." 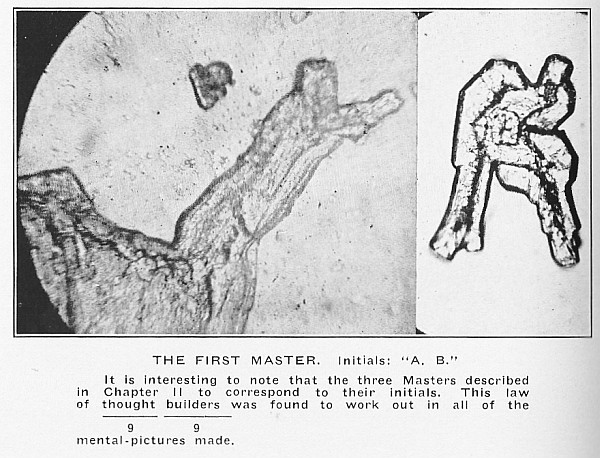 The second master was Enoch, who looks as though he was suffering from a bad cold in Littlefield's picture.

He was probably six feet tall and well proportioned. He wore a veil. Anyone might mistake him for a present-day banker, a prosperous merchant or a captain of industry.

(If they overlooked the veil, presumably.) 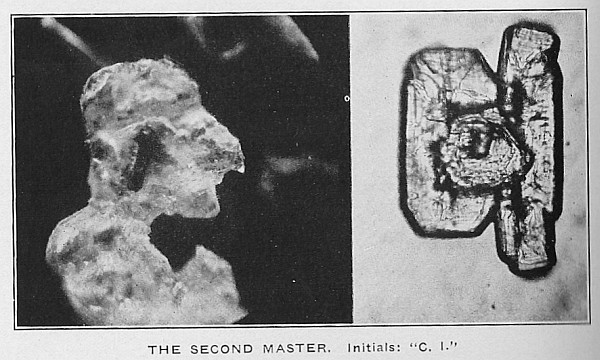 The third was Melchizedek, who being "not less than eight feet tall" would make a desirable addition to any basketball team. He also seems a little leaky:

While studying this third Master the writer noticed a small pool of clear water gather near where he stood.

Melchizedek is in fact a sort of walking oasis, as well as being exceptionally ancient:

"My first breath was at midnight at the time now known as the Vernal Equinox, March 21, 53,770 years B. C. It was on this date that the lines were laid upon the earth for the foundation of the Great Pyramid of Gizeh." 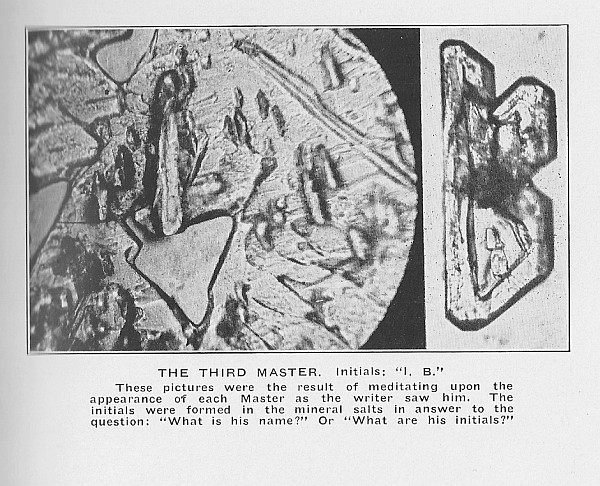 The three Masters pass on their revelations in a style that will be familiar to students of crank literature, with references to the Kabbalah, Yoga and astrology all mixed together in an indigestible gumbo, of which this example is typical:

"We shall now illustrate how the tabulated system of Higher Hieroglyphics, as presented in the first initiation in Tibet aids us in the development of superconsciousness in relation to the constant renewal of the body," the Master resumed, "and the limiting of extreme old age within the range of the laws of nutrition."

This is the prelude to a bewildering account of how numerology enables the Masters to live so long, which is too boring to reproduce here. But this magic is not limited in its application to the longevity of superior beings, as Littlefield shows in a chapter called "Practical Instruction", in which he recounts the charming story of how a woman who wanted a piano achieved her desire by the simple expedient of reciting the powerful mantra "I have a lovely brown piano" over and over, until she was given one by a total stranger. 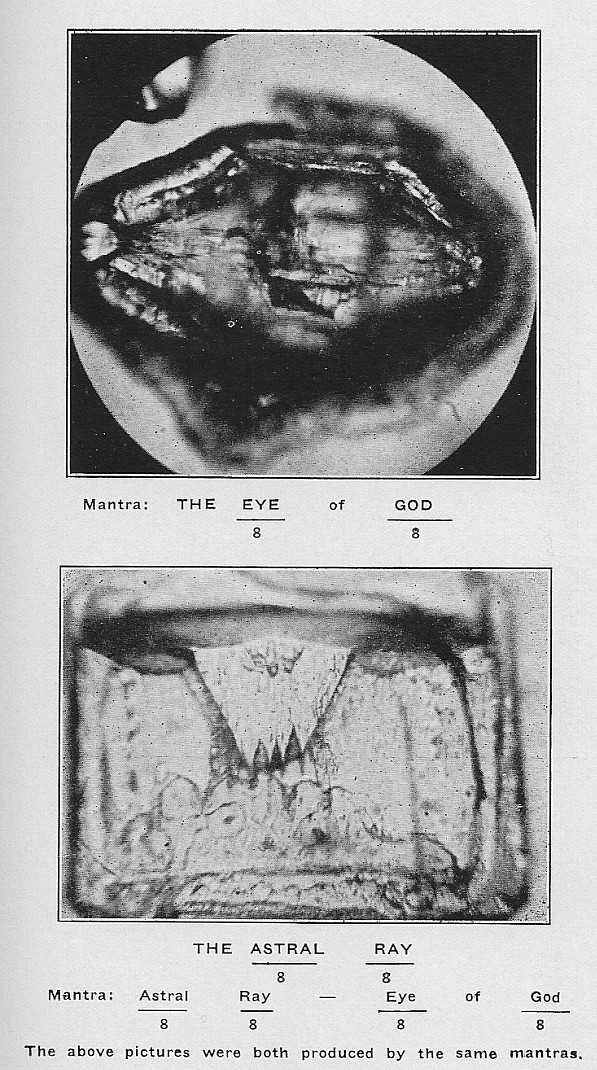 It is a credit to Littlefield's eclectic crackpottery that this book could have been filed under several of the different sections of this site. If he had been writing a few decades later I am sure he'd have managed to incorporate UFOs into the mix, too. Needless to say, despite the clear signs of psychosis in his writings and the unconvincing character of his microscope photographs, there are still some today who cite him as a pioneer.

My spirit has been telescoped

My spirit has been telescoped by this very work. I am the telepathic missionary and this telepasketch business is legitimate.
5th master

The incident which initiated

The incident which initiated Littlefield's curiosity in the first place was not an isolated event. I have heard very similar "healing tales" and anecdotes from people roughly from the same era and area as Littlefield, the American Midwest. The versions of the stories I was told didn't have any esoteric explanations, just simple inexplicable amazement and acceptance that miracles do happen.

To the author: I don't get

To the author: I don't get the point. Seriously. If you believe in things like astral world, not-incarnated "masters", prophecies, visions, etc, then you would need to criticise the inner inconsistency, or factual error, or methodological problems, if there are any. If you are a convinced materialist and consider all of the above-mentioned generally as bullshit, then it should be enough to categorize the book as esoteric nonsense without getting into details and pretending that you are giving some arguments. Actually you are giving none. You are just mentioning or quoting, in an ironic style, statements of the book, without really looking closer at any of them, because, of course, it is all bullshit, and so you just come to conclusion that there had to be a psychosis in control.

Let us be for a while open-minded and consider all of the above mentioned as possible, just to enable us to really provide some valid criticism. What you be your arguments then?

This site exists for

This site exists for entertainment purposes. You are either oblivious to that fact or you've decided it was irrelevant to your criticism.

And if you know we think it's bullshit, then why are you even bothering to contact us? What exactly is the point of your message? Do you really think we'll go "hmmm hey maybe he's right and I should consider that all my most cherished beliefs could be wrong..." If you do, then you understand nothing about human psychology.

Does there have to be a point

Does there have to be a point, other than this book being plainly ridiculous? You may disagree but that's what I think of it. I don't have to make a case for my opinion if I choose not to. In this instance I think the extracts make the case for me. If you don't think they do, that's fine, but you won't prove the contrary by handwaving and bluster.
Submitted by moleosophy.org (not verified) on 27 Feb 2014 - 20:19 Permalink

I'm sorry for you that you

I'm sorry for you that you had to put up with Anglo-Israelites. But actual flat-earthers: sheer envy. Seriously.

They are to be found here:

They are to be found here: http://oddbooks.co.uk/oddbooks/westfield.html

What exactly do you mean by

What exactly do you mean by saying that there are "clear signs of psychosis in these writings"?

It's clear enough what I mean

It's clear enough what I mean, I think. Feel free to disagree if you wish.

It's fairly clear, I wasn't

It's fairly clear, I wasn't serious. By the way, Martin Gardner dedicates about two pages in his classic "Fads and Fallacies in the Name of Science" to Littlefield. And to the point: In the preface of his earlier book "The Beginning and Way of Life", Littlefield extends his thanks to Michael Faraday, St. Paul and St. John for dictating portions of the book from the spirit world.

Curiously enough, it seems that Littlefield practiced as a physician and surgeon until his death.

Having had actual flat

Having had actual flat-earthers, Anglo-Israelites, and other defenders of mumbo-jumbo comment on here, my default position is to assume everyone is nuts. Sorry!

I have Fads and Fallacies but I kast read it so long ago that I can't recall the Littlefield stuff, but it's good to know one of the greats got there first.

Is it just me, or is there a

Is it just me, or is there a whole human face inside of the eye? That's pretty amazing.

Remarkable that the tongue we

Remarkable that the tongue we call English was not a mongrel assemblage pasted together from scraps of French, Latin, German, et al., but was in fact a noble universal language "and as such had nothing in common with any modern dialect." I guess that's the ultimate middle finger to those damnable Chinese, with their screeching speech and goofy picture language. I'm sure in in Atlantis they had some expounding on the glories of divination in sheep's entrails or casting the bones to make a decision.
Submitted by pseudonym (not verified) on 01 Dec 2010 - 08:27 Permalink

If only Oprah had been around

If only Oprah had been around when he wrote this he could have been a minor celebrity and millionaire
Submitted by Psychopompous (not verified) on 07 Jun 2010 - 18:57 Permalink

Thank you sir! I was having

Thank you sir! I was having a terrible morning until I read of this most wondrously fetid book. A good laugh is sometimes better than a cup of coffee.
Submitted by Cuyler Brooks (not verified) on 06 Jun 2010 - 20:41 Permalink

A nice title for the

A nice title for the loony-book collector- or the loony book-collector! I wonder if the publisher made any money on it.