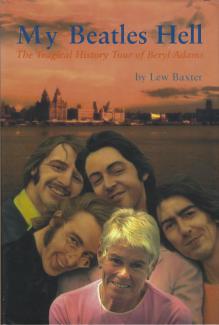 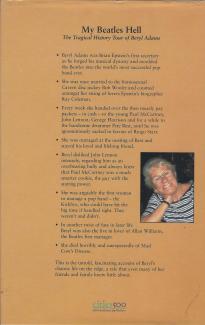 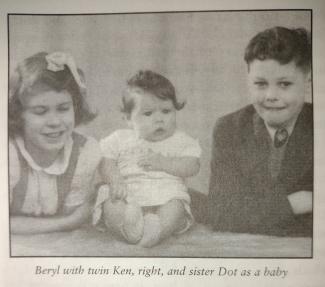 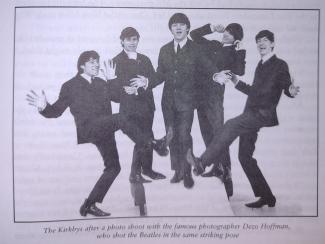 Who does the pronoun "my" refer to in the title, "My Beatles Hell"? The most obvious answer would be Beryl Adams, the subject of Lew Baxter's book, but given how miserable an experience it appears to have been for him, it might equally be Baxter himself. Alternatively - and this is my own preferred interpretation - perhaps it is the reader, who must trudge through the dismal trackless wasteland of Baxter's creation, hoping to find a reason for it to exist and finding none. The unsettling cover, on which under a rust-coloured sky the Beatles appear huddled together like a four-headed beast of the apocalypse, their faces frozen in inane grins, looming over an anxious Beryl Adams like spectres, is enough on its own to provoke nightmares before one even tackles the insufferable contents.

The justification for this sorry enterprise is that Beryl Adams happened to be Brian Epstein's secretary at the time he signed the Beatles, and her signature as a witness appears on the contract between them. She was a figure on the Liverpool pop scene and knew many of those involved. Her first husband was Bob Wooler, DJ at the Cavern, who she didn't at first realise was gay. She was also close to Pete Best, the Beatles drummer sacked by Epstein in favour of Ringo Starr, and Allan Williams, the group's first manager.

Baxter doesn't come out and say so, but it seems that in writing Beryl Adam's biography he was hoping for some new and hopefully shocking revelation about the Beatles that would make it a bestseller. Unfortunately this was not to be: Beryl consistently wasn't there, didn't know, or wouldn't say. The experience of interviewing her seems to have increasingly infuriated him. He spent hours in her company trying to extract some nuggets of information about the Beatles or Epstein and got instead only the memories of a relatively ordinary woman, a sad document but not one likely to find a large audience. And if Beryl Adams' life was "hell" it was nothing to do with her brief association with the Beatles. Baxter would like to have us believe that somehow her secondhand brush with fame was linked to her lifelong struggle with depression and alcohol, but nothing in her story suggests this is true.

Given how ungracious Baxter is about her, it would be only fitting if Beryl Adams, who died while the book was in preparation, did take some secrets to her grave. Unkindly, he describes her as:

... occasionally a bit shaky on her feet, though usually only after a few too many vodkas and orange ...

Baxter's prose is just as unsteady, though we can only guess at how many nips he'd had before writing:

She often breathed hard through her nose when hurling out the fiery expletives that could embarrass a trooper: "A real shower of bastards!" She was referring in such colorful terms to many of those she dubbed liars and cheats who circulated on the Swinging Sixties music scene in Liverpool, and, later, as pathetic camp followers on the Beatles nostalgia merry-go-round. All have touted tales of insider gossip. "Bollocks," Beryl would rail forcibly, looking a bit sheepish at the vulgarity of her swearing, but always on a roll on this pet subject.

Beryl was not above adding to the supply of gossip, even though unfortunately for Lew Baxter's potential earnings, she did not provide him with any unique eye-witnessed Beatles juicy nuggets, just tittle-tattle. So, for example, in her opinion Epstein and Lennon had had a physical relationship on their Spanish holiday together in 1963 because when Epstein returned he was in a very good mood in the office. And hadn't Lennon punched Bob Wooler for making suggestive remarks about this same holiday? No smoke without fire.

She could however properly attest to such important matters as a meal she'd had with with Brian Epstein just after Ringo had replaced Pete Best. According to Baxter, "she could recall vividly what the couple had tucked into that evening". The sharpness of recollection extends to her having ordered that oxymoronic appetiser "a medium rare steak tartare".

Ever a connoisseur of fine wines, Epstein hadn't stinted that evening and Beryl was in seventh heaven as the delicious French wine kept flowing and turned her giddy. She could barely accept that she was in such [a] place and her hunches told her that he and the Beatles were going to be massive one day; it was inevitable, the wine whispered it. There was success, determination, savoir-faire and an air of complete control about Epstein’s destiny, and it seemed to surround him like a silver aura that night.

Despite the silver aura and the whispering wine, Beryl managed to spoil the mood by complaining about Pete Best's dismissal. Her stalwart defense of Best as a better drummer than Ringo and "the best-looking kid in the band" didn't wash with Epstein, but may have helped Lew Baxter persuade Best to write the introduction to the book.

Epstein didn't bear a grudge, and there were further evenings out, including one memorable visit to the Jung Wah Chinese restaurant. For a "fey young girl" with little experience of foreign cuisine this was a great adventure, and Baxter brings a masterly touch to his Breugel-esque word-painting of the scene.

Beryl was soaking up the atmosphere, the piquant smells and mouth-watering aromas wafting around from the dozens of tables throbbing with conversation from the Chinese and British diners. And in the end he ordered for her with aplomb and discretion, a slight smile playing over his face. He had such grand social graces. It was the first time she had ever tasted that well-known Cantonese dish of sweet and sour pork, or even eaten rice that wasn't in a milk pudding.

Beryl parted from Epstein after he moved operations to London, so she was not involved in the later career of the Beatles. For a while she herself managed a pop group, The Kirkbys, but they failed to rise above murky obscurity, whether as an identikit Merseybeat outfit or after changing their name to The 23rd Turnoff and embracing psychedelia, reaching the summit of their career when their single Michelangelo scraped into the top 100.

Baxter does not present us with a conventional biography in which chronology is observed, instead most of his book consists of gussied up transcripts of encounters with Beryl Adams on various occasions, sometimes alongside her ex-husband Bob Wooler or her lover Allan Williams. Given the paucity of interesting material, it seems as if Baxter could not be bothered to do much with what he did have: drunken conversations which repeatedly go over the same ground, picking over the details of a brief period when these characters shared space with people who, without them, would grow to become legends.

Are Bob Wooler's rantings in a winebar in the 1990s worthy of print? Only if one is trying to pad out a lot of nothing to book length.

“Now, listen to me. Everyone! When I started at the Cavern in January 1961 the Grapes was still not a place that someone like Beryl would even dream of going near. Aha, but a year later, oh dear what a difference. It was attracting other people because of the groups and I even took Brian Epstein there. He sniffed a bit about it because it was still terribly rough. But secretly he revelled in it. Oh, yes. The sweat, the dirt, the hard men.”

Today the Grapes in Mathew Street has all but been ruined by brewery refurbishment freaks; corporate suits, who in a fit of madness decided about ten years ago to redecorate it. They stripped out all of the original woodwork and décor. Then they tried to make it look ‘olde worlde’ with a technique called distressing.

Wooler guffaws. “But it had been like that, prior to their ridiculous efforts. And for real, mark you. What clowns they are. My view is that they reckoned that it needed ‘tarting’ up - or rather ‘tarting’ down - for all the stupid Beatles’ fans that come tumbling along ‘Mythew Street’ trying to get a glimpse of the past.

“Of course, they never can. It wasn’t like it is today. This is just a tourist honey pot full of memorabilia nonsense, Beatles theme bars, Beatles souvenir shops and bloody art galleries showing that dreadful bastard Lennon's rubbishy artworks, I wouldn't use most of them for toilet paper.” He is waving his arms around his head, almost out of control now.

This provokes Beryl into a fit of the giggles. Bob shouts: “Now listen, this is all coming from the horse’s mouth and not the other end, You don’t get horse shit from ME!”

There is a long silence - seconds tick into minutes and no one speaks - as more wine is poured and Beryl sits quietly, shrugging and occasionally laughing fitfully. Wooler is breathing hard through his nose, an old trick he used to distract listeners.

It is clear that he holds Beryl still in his psychological fist; this man whom she liked to imagine replaced her dead dad.

(Baxter's sensitivity to people breathing through their noses is probably because of the unpleasant racket made when near the mike of whatever cheap recording device he used.)

The psychological fist of Bob Wooler passed away in 2002. Beryl Adams followed him a year later, dying from Creutzfeld-Jakob disease, that fearful condition also known, Baxter cannot resist saying, as "mad cow disease". In a life marked by unhappiness and ill-fortune, it is a rare mercy that she did not survive to see the mean-spirited cacological monument raised to her by Lew Baxter.