According to her own strangely-written account Mrs Patterson was privileged to stand at the periphery of many terrifying events. Evil conspirators and their associates confided their plottings to her in a surprisingly frank and open way. Even while she was locked up for five years in a Mexican jail they contrived to ensure that she was kept up-to-date with their shadowy misdeeds.

A plausible explanation would be that they knew her prose style and assumed that no one would be able to make enough sense of her ramblings to threaten them with exposure.

Her first brush with the evil underworld came in 1959, in Fullerton, California. She says she had made 3 million dollars by selling Las Vegas casinos to Joseph Kennedy and, wanting to invest it in a worthwhile project, decided to build a hospital and give a job in it to a cancer specialist she is taken with. (In case the name she gives is his real one, I'll call him Dr X). All this on the first page, on which she also contrives to mention Howard Hughes, for no obvious reason at the time.

The hospital plan comes to naught, due to the activities of various greedy lawyers and doctors, and - more particularly - an attempt at blackmail by Dr X's wife. All these are after Mrs Peterson's money. The end result is the abandonment of the plan. This is a tragedy, because concidentally Howard Hughes has developed skin cancer and the hospital is his final hope! The fact that he didn't actually die until 1976, of heart failure, should surely not lead one to doubt Mrs Patterson.

In the middle of all this Mrs Patterson decides to take a trip to New York. Robert F Kennedy recommends that she get in touch with someone called “Ralph”. Before long she is involved in a plot to smuggle guns to Africa, suckered in by the ludicrous cover story that they are going to Catholic Sisters in the Phillipines.

Anyone who manages to get even this far (chapter 2) is worthy of some respect. The unfortunate reader is faced not only with Mrs Patterson's impenetrable, malapropistic, prose style but her frequent allusions to obscure details of American political affairs. Time and space mean little to her either, as her narrative hops back and forth through the sixties and seventies. It is also hard to tell when she was present at events or merely read about them in the newspaper. “I informed so and so about such and such” is a frequent formula, which usually merely means that she wrote so and so a letter.

You may get some idea of her very special writing style from this paragraph about an incident connected with the Watergate scandal:-

Could the recent scandal in Washington be the result of an honest man's efforts not to be bribed or not to even associate himself with any conflict of interest in, a then pending, anti-trust suit? Could the person, John Mitchell, U.S. Attorney General, have “OFFENDED A LADY” for the lack of better and more specific phraseology of saying “scorned a woman.” I consider the latter a far more appropriate manner of speaking in view of the image of Mrs. D. Beard, lobbyist for ITT. according to the news media. She was called a coarse and rough woman; and judging by her language there was little left to the imagination of the public. If we are to believe she is capable of such erroneous and character assassination as is presently evidenced by the farce upon the decency of the justice Department, we must by virtue of the account, consider her no less capable of negating the truth for any reasons whatsoever. In retrospect to all the lobbying and her maneuvering, Mr. Mitchell conducted himself as a gentleman under all conditions. By the words of Mr. Mitchell, he asked to be excused from discussing any phase of the conflict of interest concerning the anti trust suit pending in the court in connection with I.T.T. when approached by Mrs. Beard. He could not, by virtue of his respect and courtesy due his host and hostess, demand Mrs. Beard be thrown out of the house. Yet, his request as a gentleman as well as one in a very precarious position politically, to Mrs. Beard that he please not be requested or expected to discuss the situation was given no consideration by her. She flaunted her person in an acerbated manner during the hours she was the guest of others which was, in effect, prostituting the graciousness of her host and hostess to have taken advantage of their hospitality for such purpose.

(Imagine ploughing through some 400 pages of this stuff.)

Mrs Patterson is a Nixon groupie, and will not hear anything wrong about him. Watergate was part of a gigantic plot by Nelson Rockefeller to bring about the end of democracy and establish himself as the absolute ruler of the USA. He was also behind the assassination of JFK. If your appetite for the evil deeds of liberal politicians is not sated, you will also want to know that George Wallace was shot on the orders of Hubert H Humphrey. 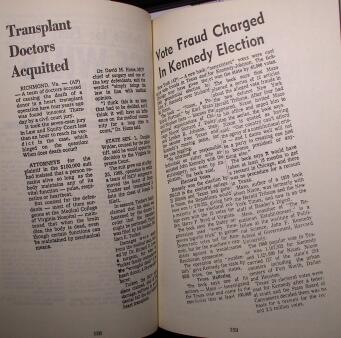 The rants of Mrs Patterson are interspersed with clippings from newspapers and other sources, which are intended to bolster her argument but which only serve to add to the general air of mania emanating from her book. Perhaps the weirdest of these are found on the last few pages: adverts for Miami Beach hotels and some unfunny and irrelevant cartoons from the Miami Beach Herald which I think are meant to show what a great paper it is. Miami Beach is where Mrs Patterson lived, so these pages seem to have been included in a display of local patriotism.

As to who Mrs Patterson is or was, the dust jacket tells us that she was born “Annie R Edmond de Rothchild, in Greenwood, South Carolina”. After a religious upbringing and education, she became a beautician. She married and moved to California where she worked as an “economist” for Klauber Wagenheim [sic - should be “Wangenheim”] and Company. Confusingly she then says it was after this she went to UCLA and graduated with a degree in economics, in 1939. After working, travelling and raising one son, she claims that “during the past several years, approximately fifteen or twenty I have been in business financing. I represented private capital in both the United States and foreign countries. I was both a national and international financier”.

If this does not stretch your credulity, given Mrs Patterson's tenuous aquaintance with logic and literacy, then her assertion that she “interceded with China in [sic] behalf of the United States and to bring a cessation to the war” might give you pause, as might this:-

Above all else, I served five years in a Mexican prison for no other reason but that I confiscated the nuclear films showing the farce of the Missile Settlement but none dared accuse me ... to admit there were such films. So, I was accused of misuse of a credit card.

Most intriguing, though is the final paragraph of the jacket blurb:-

I have written the lyrics for twelve songs for disc recordings. The music will be set and the recordings ready for sale for the Christmas season, titles - “To My Son, Burr”, “God Is The Way” - music to be modern gospel. Ask your record dealers for the recordings.

Naturally I would love to hear what these songs sound like, if they were ever recorded. Oh yes, finally, that letter typed on the inside of the dust jacket: it is in Mrs Patterson's own phrase “a dilly” (strange spellings and typos all in original, I swear):-

Dear Ruth,
I was robbed of all data but I had copied all addresses with no identification on them as to what they were. I have had all names and addresses and had all book orders destroyed. I can wrote a paperback on how I have been opposed. Had 1,500 books stolen from me through BOOK RATE from the Post Office...

I received the books Dec. 8 1974 and sent advertising as is this to you to know if you were as yet at this address. Will you please acknowledge this notice so that I mau ship your book. Honey this is better than was the the original because I lost the option on 300,00 acres of land in N.C. onwhich we located the greatest oil find south of ALaska... read how Nixon was framed and how he will not refute my story... learn how he was given shots to force him to sign the ALaskian pipeline bill--- God, we are already in communism.. see Jimmy Hoffa is gone.. over the farce of the NEW YORK race tracks... Hoffa was involved but stole the date to prevent testifying of Sam before the FBI MAFIA committee.... and, was planning to have it used for the blackmail of Rcokefellow and Jevits to assure him of a victory in Supreme COurt so that he could defeat Fitzsimmons in the TEAMSTER election... and, then.... AH, HA... I suspect they used Fitzsimmons to get Hoffa.... the natural one for the job.... Read beginning on page 304-1A the chapter I have added since the resignation of Mr Nixon and why Ford was appointed... my next book is NIXONS COPPER COFFIN.... and it is a dilly.... I will expose my own hometown cligue Judeg WALTER HOFFMAN and others out to get Nixon and Askew [sic, for Agnew] before even Askew was VP... to have killed him after he appointed Rockefellow V.P. after Ford was forced out. Nixon rated on Askew to prevent his death--- at least he walked out a live man if supposedly disgraced... Nixon was a good man--- Ohm what I know... WHAT I KNOW because I was taken into it to carry votes in m y home-town Virginia... I wept... actually wept when I learned who and what were my lifetime friends... sure I was in the affluient group all my life... but, now I knew and how it hurt... the sellout of the USA for oil withwhich to take away our cars... schools bused from out of the state by another year--- government-supported schools... too far for home commuting-- must remain away from home MOnday through Friday--- God, help us the beginning of COMMUNE for them and then the mass transit.... I am frightened to death for this nation.

Please notify me immediately if at this address, please. Will be in New York very soon now... would love to call you and maby visit with you.. will be on radio and TV... give me your telephone number of you have no objections if it is unpublished.... Your priviledge to refuse if you like and no offense....

Lovingly, ANNIE R PATTERSON
[signed]
(originally from Miami Beach Fla. remember your wonderfully incouraging letters and your order for the book --- USA I LOVE YOU, 4 Assassinations. _..... $14.95 ... you have paid.

Which seems to suggest that Ruth Matthews had originally sent $14.95 for a book called “USA I Love You, 4 Assassinations” - a wonderful title, incidentally - and instead, after some years had passed, she got first the dust jacket of this book with the above letter typed on it, then the book itself. A uniquely strange marketing technique, but well suited to the merchandise. I also have the letter which accompanied the book, dated a week later, in which she again suggests the idea of visiting Mrs Matthews in New York and describes her hopes of the book being made into a film: if it ever is, then to get a visual style to match the original, it surely should be filmed in thick fog.