Psycho-Analysis and The Love Nature 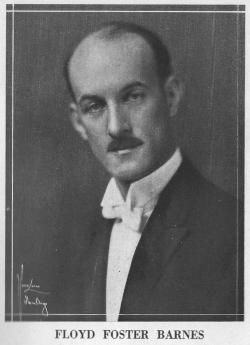 Floyd Foster Barnes wrote and published a number of short pamphlets in the 1920s, of which I have two in my collection: this one and another called Trapping Sunbeams. Barnes was a pretentious character who liked to call himself a "human engineer" and, more formally, a psychologist - though there is little evidence in his writings that he ever studied the subject. Still, he looked suave in his evening dress so he must have been a good chap.

Barnes begins reasonably enough by pointing out that love is a much-abused term.

Love has been much discussed by poets, novelists and the playwrights. They have beclouded the subject instead of clarifying it, mainly for artistic reasons.

In contrast he promises to discuss the subject

in a scientific way.

He notes that, in contrast to human experience,

The love activities among animals never cause any lasting disturbances of their psychological life.

A spiny anteater who has recently been dumped, for example, will set off in search of the therapist's office but will feel better before she arrives, and this is why there is no money in animal psychology. 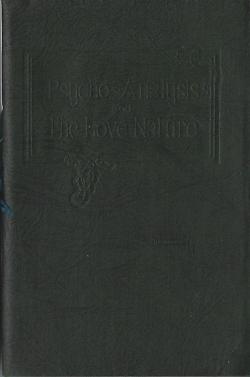 Many have thought the heart is associated with love, but Barnes, with characteristic scientific exactitude of language, says to the contrary:

It is a bunch of muscles that act as a centripetal pump.

If not the heart, then where is the seat of love nature? This is still a matter for debate but Barnes thinks it is most likely located

in the pelvic region

Fair enough. Wherever love emanates from, it demands expression, Barnes says, though social pressures force it to be repressed, leading to "nervousness" as he claims Freud put it.

A hundred men may admire a beautiful woman, but only one of them will have well within him a real love for this woman. There is then a biological craving to pursue this love impulse and this woman, and finally to marry her, if possible. But if she repulses him, it takes considerable time for him to forget, and many times he never does forget, the impulses being repressed and the nerve memories hidden in his subconscious mind, to crop out and have its disastrous effect upon his nervous system in the form of an ailment, or influencing his personality.

That well-known biological craving for marriage. Was Barnes reading the same Sigmund Freud as the rest of us? But he goes further than Freud in identifying the underlying mechanisms at work.

Every deep love impulse stirs the regenerative organs and causes reproductive elements to be secreted and thrown into circulation of the blood. Remember, these impulses are automatic and involuntary, and are not controlled by will-power. The gonads, or reproductive glands, have a two-fold purpose. It has been generally believed that these glands are for the express purpose of reproducing offspring. Scientific research discloses that they secrete an alkaline fluid that is a food and a form of electrical life to nerve and brain cells. This is proven also by the fact that all great men and women are strong-sexed people.

Keep stirring your gonads, if you want to be smart. Careful, though, you must direct the magic fluid to your thyroid gland to feel the benefit. This is done by "using the brain", as Barnes avers, surgically precise in his terminology as always. Top brain users included Woodrow Wilson, Mary Baker Eddy and horticulturalist Luther Burbank, who Barnes says had a "young wife", which often helps.

In contrast take the case of Edgar Allan Poe, who being addicted to the wrong sort of fluid, was not a good role model. Because of his drinking, Poe did not even remember the writing of his most famous poem, Barnes tells us. Many of us have woken up and cried "Never more", but Poe apparently went one step further.

But even for the teetotal there are perils. Dancing, for instance, is dangerous.

The great harm coming from dancing is that people do not use their creative mentality. Dancing stimulates the love-nature, it might be ever so unconscious on the part of the dancer, but the stimulation is there just the same, and the blood stream is charged with regenerative energy, which runs wild because there has been no concentration, no serious thinking. Mary and John, after dancing all evening, come home and go to bed, only to arise in the morning tired and nervous. If Mary had written a few letters to friends, and John had spent an hour or so on his engineering course, the brain would have been developed, and the blood stream put in good chemical condition thru the action of the thyroid gland.

(Anyone who thinks people "do not use their creative mentality" when dancing never saw me out on the floor capering and cutting a rug in my prime.)

Barnes, having thus forensically scrutinised Love, now turns to the subject of psychoanalysis, which, as he acknowledges, is difficult for the layman to understand.

Psycho-Analysis is a synthesis of all data which Biology, Neurology, Endocrinology and other sciences of mind, human psychology and personality involve.

Practitioners, armed with all this array of knowledge, are able to use advanced techniques in treating neuroses caused by sexual repression.

The Psycho-analyst seeks to find the old repressed love affairs that have become lost at times to the conscious mind. Once found, they are discussed, made light of, the folly of them ridiculed [emphasis mine - AA], and after such discussion they do not seem so terrible. The heart is made lighter, and the person is relieved from its harmful effect.

In our soft-headed and feather-bedded modern world it is sadly practically impossible to find a therapist who will employ productive mockery. (Aric Sigman might be an exception.)

Using the power of ridicule, Barnes says that he cured a woman of rheumatism, which is a remarkable claim indeed. Apparently, literally mocking the afflicted is beneficial. He does not mention if any of his patients punched his stupid face in, but I hope they did.

Finally, Barnes sums up his message as follows:

Look not upon this greatest and most beautiful emotion as something vile — something which should be crushed. When this love-nature creeps into your life, you should not repress it and stifle it. Direct it toward the building of the body beautiful and giving your brain and nerves that electrical spark which will illuminate your life and make it shine as a beacon light, to bless humanity with constructive service.

Don't crush or stifle your creeping desires, vile though they be (I paraphrase).

If the text itself were not enough, further evidence of his quackery is to be found at the end of my copy of the book, where an unknown hand has written in ironically faint pencil - surely under instruction from Barnes himself - the words "I am a Positive Personality". Sure you are, sweetie, sure you are. Fortunately such examples of someone falling for his brand of humbug are rare, and even by the standards of this site he's very obscure and likely to remain so - unless YOU out there in comment-leaving land can tell us more about him. We wait, as ever, in breathless anticipation.