The Wind Systems in the Universe 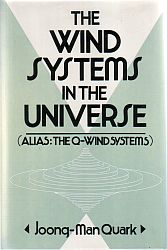 This book has the distinction of being one of the stupidest attempts at theoretical physics I have ever read. Like Walter C Wright, Quark has an unusual explanation of gravity, but his is even dumber. Here it is:

The force that holds things together on a moving body is nothing but atmospheric pressure on the moving body.

For example, the Earth is being squeezed by the outer space atmosphere as it orbits around the sun at high speed. If the Earth were standing still and not moving around, nothing could stay on it, including the Earth's atmosphere. The universal space would have plenty of burned-out rocks floating around. Some of them would be many thousand times bigger than the sun, but they would not have any gravitational pull as long as they were not moving around by force.

There is atmospheric pressure in space, because “the universe is filled with gases”. These gases form “wind streams”, which in turn merge to form galaxies, which then form stars, planets and other celestial bodies, among them black holes:

Every spinning body in space has a wind disk. If a rotating body explodes then the body's wind disk becomes a black hole. [...]

If a wandering black hole encounters an object that is smaller than itself, then the black hole swings the mass around and destroys it.

Quark's work is not merely theoretical as he has identified a potential threat to our existence: “The Spiral Arm Disaster”. Apparently the Milky Way is “old” and the spiral arms of our galaxy are “getting longer and dragging along their way”. Soon they will be “coming”, and when they arrive “every thing in the solar system would be out of its orbit and explode”:

There is nothing man could do about it except launch some satellites high in the sky vertical to the galactic plane and monitor what is happening to the spiral arms near the solar system. Thus man must try to find a way to travel to another, young spiral galaxy before the end of the solar system. Otherwise, man's civilisation will be terminated without a trace when the spiral arm disaster comes.

Man consumes about 6 billion tons of energy each day. This means Earth is losing its mass every day.

(I wonder where this figure came from. It's about a ton of something per inhabitant of the planet, per day, which is a tad high even if you believe, as Quark seems to, that “consumed” matter simply disappears.) His remedy for this imaginary ill is a simple one, though appropriately bonkers:

It is to increase the Earth's physical weight by adding more mass to this planet as soon as possible [...] one way is to bring mass from outer space, and the other is to grow more trees, cut the full-grown ones, and preserve them from decay.

In order to grow more trees within a short period of time, we have to build tropical islands. To build a tropical island, we must construct an elliptical circle with rocks by dropping them into the tropical sea, then fill the inside of the boundary with timber. When the timber has been filled almost up to the sea level, then we can use rocks to press it down.

Quark's ambitious plans for Planet Earth are not limited to island building. He also proposes to solve the following urgent problems:

Of these, it is his proposal to break down language barriers through the creation of a new common language that I find most interesting:

Creating a new language could be a very difficult project, but it is possible and should be done. The stone age people created their languages; so can we.

First, we need an agency that will conduct research activities for analyzing existing languages and creating new ones.

Second, we should conduct an idea contest annually. If the contributors of the ten best ideas were awarded big prizes, then it is almost certain that someone will come up with an excellent idea.

Deep, eh? Now, you will note that throughout this review I have resisted the temptation to make any obvious pun on “wind”, despite how apt it would be considering the indigestible yet vapid nature of this book's content; I have also omitted to point out that “Quark” is a somewhat ironic name for someone so breathtakingly ignorant of modern physics, and that a quark is a tiny particle of very little weight*. Sometimes a target is just too easy, even for me.

* Yes, I do know the difference between mass and weight, thanks.