Tracing the Evolution of Modern Almanacs from Ancient Ideas of Time and Suggesting Improvements
Author(s)
Moses B. Cotsworth
Publisher
The Author
Edition / Year
1904
File under:
pyramids calendar reform
In the section labelled
Numb and Number 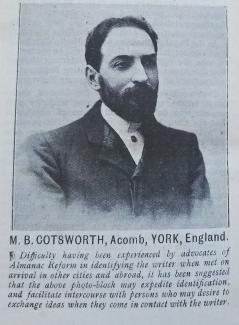 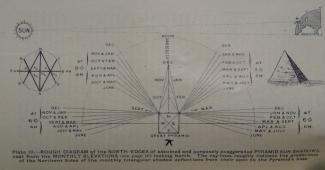 Moses B. Cotsworth dreamed of reforming the common calendar, but his approach to telling the world of his ideas was so endearingly eccentric that few were ready to listen, with one surprising exception. His insistence on abusing the word "almanac" to mean the calendar system is the least of his oddities.

The Rational Almanac is a "pocket-sized" publication, being less than 4 inches (10cm) wide and about 9 1/2 inches (24.5 cm) tall. It is, however, an inch thick, with more than 500 pages, and weighs over a pound (about 500g): any pocket one put it in would have to be a strong one. Most of it is taken up with a discussion of how the calendar arose in prehistory, about which Cotsworth has some novel ideas. The "rational almanac" itself is dealt with relatively briefly. Cotsworth found side-questions relating to his subject irresistible and like many a self-publisher was loath to omit any material he thought interesting.

The Surprising Potency of Little Enoch

After the description of his new calendar, which I'll discuss later, we come to a short pamphlet called The Natural Solution of the Early Bible Ages of Men which has been bound in as originally printed on pink paper complete with its price ("1d".) Cotsworth, was, like many, puzzled by the great ages of the Patriarchs in the Hebrew Bible. He conjectures that the "year" of the pre-flood era was in fact a lunar month, so Adam's age at death was merely 75, not 930 (29.5 days in a lunar month, 365 days in a year, so 930 x 29.5 / 365 = 75), and Methuselah lived to be 78, rather than 969, years old. Unfortunately for this theory, which is not unique to Cotsworth, in the same passage of Genesis where these ages are given there also appears "When Enoch had lived 65 years, he became the father of Methuselah." Applying Cotsworth's formula, Enoch was just 5 years old when he became a Dad.

Cotsworth's general argument is that the ancient Israelites only gradually learned how long a year was, so there was an intermediate stage when they used a 5-month, 150-day "year", then a 6-month one, and finally a 12-month year after the Exodus from Egypt. Certain chronological anomalies in the Bible can be explained by this approach; those that cannot must surely, Cotsworth says, be due to translation or transcription errors rather than a failure of his theory.

Having disposed of one great puzzle of antiquity, Cotsworth then turned to another: why the Pyramids and other prehistoric monuments were built.

THE problem of the Pyramids is of such magnitude and intricacy that it has perplexed humanity and remained unsolved for the last 4,000 to 5,000 years. Readers will therefore readily understand that its solution cannot be adequately dealt with, nor lightly disposed of in an appendix to this small book on "Calendar Reform." Still it seems most APPROPRIATE that it should be introduced here AS THE BASIS OF THE CALENDAR, since experiments and investigations have led me to believe that the REAL OBJECT OF THESE STUPENDOUS ERECTIONS WAS TO DETERMINE THE SEASONS AND EXACT LENGTH OF THE YEAR by their regular graded and recurring shadows.

(This "appendix to a small book", it should be noted, is 470 pages long, dwarfing the small book it supposedly is part of.)

The substance of Cotsworth's theory is laid out in this introductory paragraph: that our ancestors built the pyramids for the purpose of measuring time, in particular to make solar observations through the shadows they cast. Why did the Egyptians keep building new pyramids rather than simply improving the ones they already had? He does not provide a convincing explanation. He does say that the reason they were often built in pairs was in order to provide more accurate measurements, but only someone already wedded to his ideas would think this credible.

The conventional belief that the pyramids were built as tombs is pooh-poohed by Cotsworth. "They were appropriated as Tombs in later years" he says. No, the ancient Egyptians built them solely as giant sundials, despite the abundant evidence that they had a sophisticated astronomy. The fact that the pyramids were generally aligned with the points of the compass is proof of his theory, rather than an indication that the Egyptians already knew of such things from their observations of the sky.

Likewise the great ancient monuments of other civilizations all had a similar purpose. Their ingenious arrangements, rather than demonstrating the understanding of the seasons that our ancestors already had from other sources, served to prove that they were mere measuring devices, albeit impressive ones. The pyramids of Mexico, Stonehenge, Silbury Hill, and the conical towers of Zimbabwe were all created as "Almanac-finding observatories". You will be relieved to learn, though, that as a confirmed rationalist he did not think that supernatural or extraterrestrial help was needed for their construction.

Many pages are taken up with the detailed measurements, diagrams and calculations he used to convince himself of the correctness of his view. He determines, on the basis of no other evidence than his own convictions, that in order for Silbury Hill to fulfil its function the ancient Britons must have placed what he calls a "sighting pole", 95 feet tall, atop it. Silbury Hill is so mysterious that any explanation offered for its existence is liable to be given some credit, and his ideas about it have sometimes been accorded rather more respect than is justified.

Did The Earth Move For You?

On his way Cotsworth meanders through a number of other topics, including the morality of the production of Astrakhan fleece, which he is understandably against on grounds of cruelty, since it involves the forced miscarriage of fetal lambs. He anticipates the idea of continental drift, as he believes that there is a "turning of the World" which has caused a shift in latitude over time, and he describes geological evidence that supports the idea, but his conception of the timescales involved is rather startling. He believes there has been "a change of about 7.1° in the Latitude of the Pyramids during the last 5,000 years", which he correctly calculates as implying a speed of "450 Ft. PER YEAR". Quite a lick.

Cotsworth's reformed calendar has at its core a simple idea, that of making all months of equal length, of four weeks exactly. There would thus be 13 months, the extra one, that Cotsworth suggested should be named "Sol" being inserted between June and July. This would neatly account for 364 days, but now things start to become slightly more complicated to explain.

In order to supply the single extra day required in most years, Christmas Day would be inserted following the first Sunday of the last week in December. It would not, however, be a Monday. Monday would follow it, on Boxing Day. Christmas Day would be a special day that would not be a weekday in the conventional sense. Likewise on leap years Leap Day would be added at the very end of the year, and this too would not be a weekday. It would be preceded by Saturday 28th and followed by Sunday 1st January.

Cotsworth also proposed to fix the other holidays, as he explains in a summary:

If my whole scheme be acted upon —

i. Lady Day, now March 25th (Quarter Day), would always fall on Saturday (its most convenient day) and be the last day in the revised March (3rd month). That month-end would thus be far more suitable than now for the settlement of rents, leases, etc.

ii. Easter Sunday would always be the 1st day of the revised May, when days are longer and brighter.

iii. Whit Sunday would always be on the 22nd of the revised June, unless it be preferably removed a week later, and fixed on the "1st of Sol," when brighter weather and longer daylight prevail. This would also have the advantage of spreading the holidays to the glorious Mid-Summer.

iv. August Bank Holiday would always be the 2nd day of the revised August.

v. Advent Sunday would always be the 1st day of the revised December.

vi. Christmas Day would then always be in its happiest position for that popular Holiday to be unbroken for 3 1/2 days from Saturday noon to Boxing night.

vii. The 1st day of the week would always be the 1st of the New Year, as well as of all future months.

viii. Months, Quarters, Half-years and Years would all be equated and end on Saturdays (complete weeks), so immensely simplifying and facilitating the keeping of accounts; and as Easter, etc., would always fall in the same week the comparison of all incomes, expenditures, railway and business earnings, etc., would be perfectly fair year by year, and far simpler.

ix. All Almanac, etc., times for earnings and expenditures would be equalized, whilst the computation of interest, odd periods for rents, and very many other at present tedious processes would be greatly simplified, to the saving of useless worry, annoyance and labour.

x. Days of the month would always be alike, as on the "Proposed future style Calendar" shown on the front cover.

Camera Man Snaps It Up

The reception of Cotsworth's calendar scheme was mixed, although it was particularly attractive to those who embraced the regularisation of human existence. In 1923 he founded the International Fixed Calendar League in the hope of promoting his idea further, and at some point George Eastman, the founder of Kodak, came upon it and adopted it for his factories, where it was used from 1928 to 1989, long after Eastman's death. Although the calendar simplified many internal business operations and calculations, since the rest of the world refused to use it, it was doomed.

The International Fixed Calendar as adopted by Eastman handles the extra odd days in December slightly differently, recognising that not everyone celebrates Christmas. A "Year Day" and quadrennial "Leap Day" are appended at the very end of the year.

People still occasionally advocate Cotsworth's calendar, but as has been pointed out, a 13-month year does not nicely subdivide for half-year and quarterly results. Though one may admire Cotsworth's ambition and enthusiasm, he was not the man to persuade the world to change its ways.