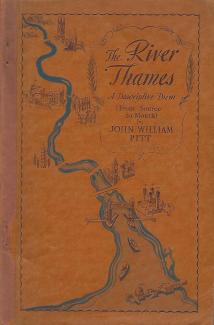 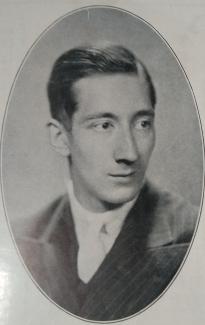 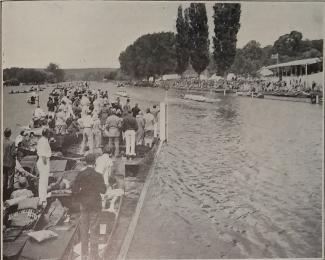 There are few good reasons to write a long poetic work, especially when the poetry is mediocre at best. John William Pitt had the notion that his literary salute to the Thames would be widely used in schools, which indeed it might if the business of education was to acquaint children with a random assortment of facts expressed in the form of jogtrot doggerel, accompanied by postcard views of locations along a watercourse.

Pitt's verse has some of the qualities of the work of The Great MacGonagall. As MacGonagall was the Bard of the Silv'ry Tay, so Pitt sang gilded verses of the Thames. Even if Pitt's scansion is more plodding and regular than MacGonagall's, yet his line "Their fate of being burnt at Oxford none of them could know", about the college days of the unlucky Latimer, Ridley and Cranmer is as brilliant as anything produced by the Great Scot, stabbing at profundity while barely achieving truism. Like MacGonagall, too, Pitt was a royalist, and his stanzas in praise of the royal family will bring a tear to the eye of the staunchest of republicans.

Visitors to this website, being universally possessed of refined critical faculties, will properly appreciate Pitt's work. To that end, here are a few selected extracts that reveal the range of his talents.

The Thames may not be the greatest river, but it's ours

Few countries cannot claim to share some famous river’s course,
Which often forms a natural frontier far below the source,
And even England’s Thames, although comparatively small,
Forms several county boundaries, and divides nine shires in all ;
But England’s longest waterways, the Severn, Thames, and Trent,
Seem merely narrow ditches when compared to the extent
Of many foreign rivers distant from the British Isles,
Brazil’s enormous Amazon, in length four thousand miles,
The Mississippi and Missouri rivers (U.S.A.),
Vast Russia’s Volga, and the Danube, Europe’s waterway.
However, none of these huge rivers own such scenic gems
As can be claimed by little British rivers like the Thames.

The burning of varsity alumni is A Bad Thing

Now, Oxford was a scene of shame in 1555,
When, on the 16th of October, men were burnt alive;
Two martyrs, Bishops Latimer and Ridley, noble men,
Condemned to die for heresy, God rest their souls, Amen,
Here, too, was Thomas Cranmer burnt in 1556;
Their memory revered, like Christ’s by any Crucifix,

At Cambridge University, while they were students there,
(And, by divine coincidence, with Latimer at Clare,
While Ridley was at Pembroke, at that time named Pembroke Hall
And Cranmer was at Jesus; in a different college all,) ;
They soon became aware of God’s high purpose for them, though
Their fate of being burnt at Oxford none of them could know.

One, Cranmer, later, Archbishop of Canterbury became,
And none was brave in vain, for everlasting is their fame,
The Pope and English Church opposed their efforts to reform
Religious doctrine of that time, which caused a violent storm
Of active protest from the clergy, mad with rage, which, then
Declared them to be heretics, and not good Christian men.

Information for visitors to Windsor Castle.

Now, when the Royal Family from the Castle is away,
The State Apartments open to the public are each day,
Excepting on a Friday, and upon a Sunday, too,
On trifling payment being made towards a revenue
Which greatly benefits deserving charities each year,
Not only those in Windsor, but in other places near.

By the way, The Royal Family is a VERY Good Thing, HOORAY

Although there are many nations, very few can claim to own
A democratic monarchy, and not a King alone
Great Britain is, of course, by far, the most distinguished one,
Throughout the modern world, surpassed in any way by none,
The recent Coronation of her gracious King and Queen,
Once more, set an example to be, by the whole world, seen,

In 1936, a royal crisis caused alarm,
The British nation, on the whole, remaining much more calm
Than other countries would have done; not one would have survived
The harm done to its prestige, (which Great Britain soon revived),
And, probably, they would have been in revolution, or
In some state of internal strife, such as a civil war.

The abdication of King Edward VII (eighth) was deemed a blow
To Britain’s royal constitution, but was hardly so,
For, though it caused such national distress throughout the land,
And pessimists, so numerous, were found on every hand,
The heir-apparent, who was, at that memorable time,
The Duke of York, proclaimed King was, and, now, is in his prime.

Thus, Britain’s monarchy has proved that it will not decline,
For its existing House of Windsor is a very fine
And noble royal family, which may prosper even more
Than it has, with so much of credit, ever done before.
Their present gracious Majesties, King George VI and Queen
Elizabeth, are greatly loved, their future quite serene.