Man v' Ape in the play of Ear-Ce-Rammed

Since the nineteenth century a number of writers have questioned whether William Shakespeare actually wrote the works attributed to him, for one reason or another finding it hard to believe that the humble, practical, Stratford man could have authored plays and poems of such towering genius. (As is well known, all great works are created by university-educated, upper-class types). To believe any of these alternative theories, however, it is necessary to “strain at a gnat, and swallow a camel”, since not one of them is based on substantive evidence.

Some very odd books have been written on the so-called authorship question, but I would tentatively venture to suggest that Man v' Ape in the play of Ear-Ce-Rammed may be the oddest. To begin with, there is its title. What the hell does it mean? I've read - well, skimmed - the book (I challenge anyone to read it closely without going crazy) and I honestly have no idea. Perhaps a book that makes no sense should have such a title: at least it gives you some idea what to expect. 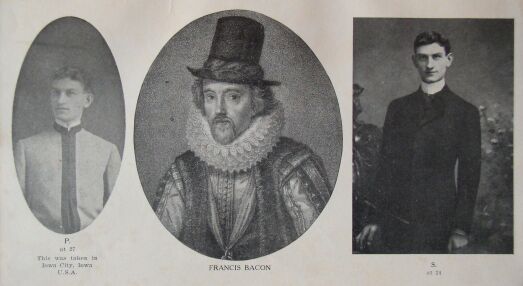 At the beginning of the book there is an address to the reader, which says:

In writing this work, we have not written a book, but volumes. In a technical sense, this work does not consist of chapters, paragraphs, nor of sentences, but of words, words and words.

Our object is to get a reader accustomed to read words, do his own thinking, and form his own opinion, instead of devouring books and depending on someone else to form an opinion for him.

We pay no attention to rules of grammar or composition, but we are catering to that which appeals to the mind and sound to the ear. If the reader will bear this in mind, he will have no difficulty in understanding our works.

That last sentence will elicit a hollow laugh from anyone who endeavours to grapple with what follows it. The very next page sets the tone: a set of nonsensical pseudo-mathematical propositions about names and words. Here's the first:

Prop 1. The values of words are variable, their values depend on the degree, station or representation.

Proof. - A word at the beginning of a sentence is capitalized, no matter what that word represents. A words that represents a proper noun is capitalized no matter where it is stationed: A family name has a higher value than a given name, for it has a higher degree, it is inheritable and not as a given name; to trace a family name, we must trace it back, down, and it continues to move forward.

Thus Samuels establishes his awesome intellectual credentials. And he needs them, for this is an ambitious project: a commentary on Shakespeare's Hamlet, which takes the entire play as it is written and, through annotations of each scene in turn, gradually reveals its secret meaning, proving beyond doubt its real author and purpose. Or, alternatively, a sequence of lunatic ramblings, which - to quote another play - are “full of sound and fury, signifying nothing”. But I do not wish to exercise undue influence: to help you think for youself and form your own opinion, as Samuels requests, here's a sample:

Have, Hebrew, Eva; t, Latin, you; now read from right to left, as you would read Hebrew: “have whilst”

Our poet is dead nearly four-hundred years and now he makes love to Evah and says - “She is mine” - what a sweet tooth he has! He could not have a Jewish lady while he was living so he provided for love-making to one now! An Hebrew Eva!

Laertes-Polonius represents the Biblical serpent, who caused Mother Eve to sin. Our poet tells us that Hamlet is a product of the Bible, but the “authorities” who know grammar and pretend to know what poetry is and what it is not, say Hamlet was inspired by “Humblet-Humbug!” - I'll take the ghost's word!

And so, impenetrably, on. By similar decipherment of the text, the author is revealed to be Sir Francis Bacon, the favourite stand-in author for those inclined to mysticism. But Samuels goes beyond most Baconians, in that he insists not only that Bacon hid his own name in the text, but also that of someone else nearer at hand:

“And tediousnesse the limbes” - Eliminate the “bes” and that word F: Eliminate e's, e plural, ee; eye eye name Shakespeare. The name Francis, he gave to me: “Good-knight is Francis: the s, from the word bs, to figure as a possessive case to the b, and, also, as a component to his first name, hence we have 's, which means Samuels and Bacon. Who will dispute this?

Not only that but:

I assert that Jesus, Bacon and P. Samuels is one and the same man, whose name is now P. Samuels, and that, Moses is Samuels' DOUBLE. Proof:-

Bacon was born in England in the year of 1561. P. Samuels was born in Poland, in the year of 1881. The difference of 1561 and 1881 is exactly three centuries and twenty years. The first initial in the word century is c; letter c is the first initial in the word Come, it means come, come, come - and you cannot deny that three centuries came. A century is the highest unit in TIME: c c c = 9, number 9 is letter J. Jesus, Come, Come, Come.

What we have now left is number 20. Letters P and E = 20. The first initials of the name words Egypt, England, Palestine and Poland, are letters E and P; I awoke in the Commonwealth of Massachusetts, at the age of 52 years. Take the first initials of Palestine, England, Poland, Egypt and Massachusetts, and add them, in order to prove to you that I am the same man of that DOUBLE and was born in those places, then you have:-

So what on the surface is a masterpiece of drama by the Elizabethan playwright William Shakespeare is actually a work of prophecy by Francis Bacon in which he foretells his own future rebirth as Philip Samuels, and incidentally reveals his identity with Jesus and Moses. Surprisingly, this radical reading of Hamlet has not been given much attention by mainstream Shakespeare scholars - nor anybody else. Is it not time for a revaluation of it in the light of post-structuralism, post-modernism and post-nasalism? Not bloody likely.

Thanks for the tip Murray,

Thanks for the tip Murray, sounds very interesting. I'll look into both of those.

If you're looking for more

If you're looking for more recent examples of this type of literature, Gareth Penn's "Times 17: The Amazing Story of the Zodiac Murders In California and Massachusetts 1966-1981" is a remarkably kooky dissection of that mystery along the sames lines as the one you've described here. Don't get offput if the author appears at first a bit too credible.... I don't have a hard-copy version but it's available for free online (drop me a line if you're interested and have trouble finding a link). Raymond Grant's "The Zodiac Murders Solved" is in a similar vein and was until recently available online as well but the domain has expired. Really both works ought to be considered together; Mr. Grant was deeply impressed by Mr. Penn's logical constructions, and his book is really a tribute to Mr. Penn, in a rather hilarious way which I would hate to spoil for you.

Anyways, thanks for the entertaining site!

I presume I am not the only

I presume I am not the only one reminded of Wodehouse's story "The Reverent Wooing of Archibald," wherein a character finds proof of Bacon's authorship by taking these lines by Milton:
"Who needs my Shakespeare for his honoured bones?
The labour of an age in piled stones?
Or that his hallowed Reliques should
Be hid under a starry-pointing Pyramid?"

I always found that very funny, but now I see it as a case where the truth was much stranger than the fiction.

A site called "Booktryst" had

A site called "Booktryst" had this to say on Phillip Samuels' work:

A prime contender for the title of most eccentric entry in the annals of the Bacon-Shakespeare controversy, Man v’ Ape is Samuels’ heavily (even tortuously) annotated edition of Hamlet. Using a numeric cipher and a host of obscure symbolic, linguistic and Biblical interpretations, he here proves that Francis Bacon had prophesized the coming of Philip Samuels as the incarnation of Jehovah, and that Samuels is charged with leading the Jews to an independent state in Palestine. Among the many arguments: attacks on Darwin that give this volume its name (“The image of God did bury Malthus-Darwin under a heap of dust never to rise again”), allusions to Hamlet’s encoded attacks on the Roman Catholic Church (“Ham=21. Ham plus Pope=70,” etc.) and even perhaps the murky claim that Samuels is Bacon reborn."

Pretty much this is the Francis E. Dec rant flyers arranged into a book and focusing into one point, not fifteen.

Thanks. A pretty accurate

Thanks. A pretty accurate summary of this truly bizarre work.

I can't believe no one has

I can't believe no one has ever commented on this book. All I can say is, Francois is close to Francis, and I love bacon, so I must be Francis Bacon as well. That alone makes more sense than all the quotes from this book.