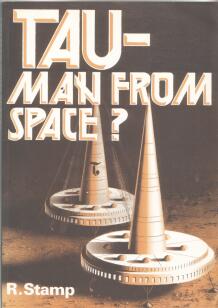 This adventure story by R Stamp, a retired draughtsman, suffers from two major disadvantages: a nonsensical plot and a narrative style which manages to be at the same time dull and confusing. It is so hard to read it is almost painful, but I have selflessly trudged through this neglected masterpiece in order to be able to bring you it in predigested, palatable form.

(Mr Stamp's first surely unique contribution to the art of the novel is a prefatory list of characters which actually gives away the major twist of his plot. Even with this helpful guide, it is still hard to follow his story, so please forgive me, Stamp fans, if there is any error of interpretation in what follows.)

The narrator, Mr Zado, has been appointed the investigation chief of DSSOG, the Desert Space Ship Observation Group. DSSOG is an amateur organization interested in space, which has two office locations: its headquarters - a large hut in the garden of Mr Zado's house in a London suburb - and an observation post in a North African desert, known rather militarily as DSSOG Des. Pos. (I see Zado as somewhat like Captain Mainwaring in Dad's Army, brusque, pompous and rather dense).

Zado's first act in his new role is to go through the personnel files. For an organization of only 25 people DSSOG has an excessively bureaucratic style, and like most bureaucracies it is riven by fierce internal politics. In this case there is a division between those who believe in men from outer space and those who do not, Zado being numbered among the sceptics along with three strange brothers named Neffer.

Those who believe in spacemen include one Serth, who runs DSSOG Des. Pos. and a chap, bizarrely named Fritters, who came up with a scheme - worthy of the great Wile E Coyote - which involves parking a dummy spaceship in the desert and, when curious aliens land, trapping them with a net and some giant magnets. Zado is puzzled to find that Serth's records are missing from the files along with the description of his own 'patent energy extraction motor', but during his search for these items he finds a piece of torn card marked with the enigmatic letters IIIOSO.

At this point Zado sets to musing on matters of Science, of which he has an unusual understanding: within a few paragraphs he draws together a couple of familiar optical illusions (the Delboeuf and Muller-Lyer effects), Einstein's theory of Relativity and some mysterious unspecified hereditary characteristics. As if that were not enough, he also raises a profound question, “Did the religions of the world stand endangered by such 'atheistic' activities - billions of dollars to find out the true gravity at certain points in outer space?” that I have never seen answered - or even asked - in any scientific treatise.

Despite some grumbling from his wife, Zado sets off to visit the desert observation point. His arrival is met with a revelation: while he was in flight, Fritters' trap was sprung and a space man has been captured! Zado gives the supposed alien the once over, notes him as a skinny and unprepossessing chap in a nylon suit, then gets on with the more urgent matters of having his dinner and inspecting Serth's paperwork.

When the DSSOG team get around to a closer examination of the space creature they can get little from him: he refuses to speak, though as one would naturally expect of a space being, he does use deaf-mute sign language. One of the Neffer brothers searches his clothing and discovers four paper pages in code “presumably printed by some outer space printing company”. The decision is made to send him to England, where they can try hypnotism on him.

Back home, Zado sensibly makes sure he has a couple of good meals and a night's sleep before proceeding. TAU I, as Zado has named the alien, has been taken to some shadowy (government? military?) facility, and it is there he is to be hypnotised - with remarkable results. The alien not only speaks - in fluent English, as one expects - but claims that he has turned the tables and hypnotised Zado! What a turn of events!

The alien tells Zado that aeons ago some non-humanoid space creatures came to Earth only to find themselves trapped here for some unexplained reason. These creatures are invisible “because of the differences of light frequencies that affects earth sight and the high gravity conditions existing in such regions as the Nevada plateau” - is that clear? TAU I came to Earth, even though he knew he could never return because - and note this well - outer space “was empty and remote from what I really wanted”.

What TAU I wants is to study “the Relativity of Importance with respect to Space Reality and Earth Reality”. (Obviously they have recreational drug abuse in space). He follows this assertion with more bizarre ramblings about gravity and a supposed 'Space Planet Numbering System' resembling the child's mathematical magic trick which ends with you taking away the number you first thought of - and hey presto!

Zado and the Neffer brothers decide to travel to Nevada to look for the legendary invisible space creatures. They arrive at the oddly named town of Phewna and make for the equally oddly named village of New Pharawa, which is the nearest habitation to the plateau. There they encounter Soughton, an amiable fellow with a ginger moustache who says that the owner of the plateau, a man named Lect, is expecting them and has given his permission for them to camp up there.

They climb to the plateau and make camp. As night falls, Zado goes for a little walk. A shadowy figure passes him, but he cannot make it out. Is it one of the invisible space creatures?

Next day they all troop back down. (Why they did they camp up on the plateau? Who knows?) In town they meet the evasive Lect, who vaguely refers to “extra-terrests”, and also mentions one Tim Blaston, a “scientist gold-hunter” who hangs around the plateau in a suspicious manner. Lect then produces a copy of the same document as TAU I had on him, but with an extra page!

At this point the plot becomes so incomprehensible and turgid that summary is almost impossible. Lect repeatedly contradicts himself, which unsurprisingly makes Zado suspicious. Is Lect part of the mysterious IIIOSO (the Integrated Institutes of Investigation into Outer Space Observation)? Who are they? What do they want? Are they really selling space ships in return for gold? Who cares?

TAU I escapes; there is a showdown at DSSOG Des.Pos. which might almost be exciting except that as Zado isn't there it is told at second hand - not the best way to keep your reader awake; and Zado buys some IIIOSO shares in one of the book's few highlights, a Kafkaesque invocation of long shuffling queues of grey men, winding through the corridors of a phonily lavish office block whose lift does not work.

All is resolved in the end by Ignatius Neffer, who shoulders his way into the plot as a sort of Holmes to Zado's Watson. It turns out, in an interminable denouement of explanation, that IIIOSO are Serth, Soughton, Blaston and some others engaged in some incomprehensible elaborate fraud which has as one of its aims the stealing of the gold on Lect's land. There are no space men! It is all a trick! (And they would of gotten away with it, too, if it weren't for them pesky DSSOGs!). Why they needed to build not one but two fake spaceships in a North African desert, impersonate aliens and actually tell their foes where to find the focus of their evil intentions, I am still struggling to understand. What a pity it is that Mr Stamp's work has not reached the mass audience it deserves, in which there surely must be a few special souls capable of grasping its true meaning.

This book may be based on

This book may be based on something which actually happened in 1980; members of the Swindon Center for UFO Research (SCUFORI) began receiving threatening notes and phone calls which they tracked back to a fellow member. The Swindon group only had six people, unlike the DSSOG's twenty-five. Also, all the nonsense about building a UFO, the desert post, and the weird confidence scheme are R. Stamp's invention - or are they? Possibly R. Stamp heard about the SCUFORI incident while doing research on UFO groups, and there might be a slight connection between the con job in the book and an actual pair of scammers that operated in the late 1940s selling fraudulent oil detection equipment, and who also told author Frank Sculley a complicated hoax that three UFOs had crashed in the desert near Aztec, New Mexico. Also, the construction of a fake flying saucer is part of Robert Heinlein's 1950's novel "The Puppet Masters."
Submitted by Alfred Armstrong on 09 Jan 2012 - 10:56 Permalink

Ah, a Frank Scully connection. Scully was a fascinating character, wasn't he? Apart from the UFO stuff, I think his account of meeting Thomas Mann in Rogue's Gallery is one of the best pieces of unintentionally humorous writing I've come across. (It is evident that Mann thinks Scully is an irritating bore but Scully fails to take several broad hints that he is not welcome. He not only missed the signs at the time, he didn't notice them in retrospect and edit them out of his narrative. Thus the reader can see what he couldn't. This sort of transparent subtext is something one usually only encounters in fiction.)

I haven't read Rogue's Gallery, but I'll look for it now. Like many people, I only know Frank Sculley from his UFO book, Behind the Flying Saucers, which is as substandard as they come. The greatest example of that within the book (besides the wild story of the child ham radio operator who either got his equipment to repel metal or levitate - I can't remember which) is the Aztec, New Mexico crashed saucer story. Sculley did no real investigation of the tale, which involved three space ships crash landing, numerous dead aliens, and miles of Army red tape. Even a limited examination into the background of "Dr. G" (actually Silas Newton and his relative Mr. GeBaur) would have discredited the entire thing, but then there probably would have been no book. I think the UFO field would have been better off without it, but then there were so many schlock books on the subject at the time; when you have Patrick Moore the TV astronomer writing a "I met an alien on the moors of Scotland" potboiler, the market is saturated.
Submitted by Rich (not verified) on 09 Sep 2009 - 17:53 Permalink

Loving the site, especially the rather baffling comments you seem to attract. Can I ask exactly how the twist is given away in the list of characters? I always love it when twists are given away right at the beginning. Unfortunately chosen chapter titles or overenthusiastic blurbs are the most common but I've got a nice copy of Agatha Christie's Appointment With Death which gives away the murder method in the cover illustration. Cheers, Rich
All comments