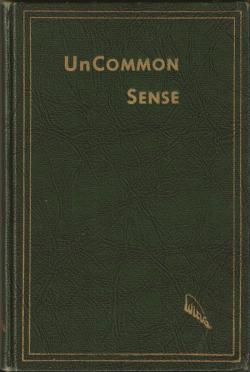 What book could be finer than one which teaches processes of logic and thought?

What could be a finer gift to youth, now beset by slanted and dangerous influences, than an exposition of communist tricks; and proof that Capitalism is the true course for human advancement?

What finer gift could be presented to every motorist than an outline which, when followed, can eliminate the litter from our highways and parks; which can greatly improve highway safety and design; which can bring true glareless night driving, and a multitude of other motorcar improvements?

The above comes from Russell T. Wing's characteristically immodest blurb to his book, which is with equally characteristic eccentricity printed on its endpapers, an innovation he boasts of as "a new trend in book construction". Having had some notable successes as an inventor Wing saw himself as a prophet and trailblazer whose words would be worthy of the world's attention.

The world chose to take a different view, possibly because he decided to express himself in verse, a difficult medium at best, and not one commonly used to advocate improvements in motor car design. The overlap between readers of poetry and those interested in engineering is a small one. This may be a regrettable state of affairs, but it is an enduring one.

Wing was an engineer and inventor whose career reached a peak in 1940 when he patented a new ink feed mechanism for the fountain pen. This was taken up by the Parker Pen company and it brought him a generous income for the time, as evidenced in a court case he brought against the Inland Revenue. With such a success behind him you might expect he would be a contented soul but on the evidence of this book that was not the case - perhaps to have an inventive nature demands constant dissatisfaction with the state of things.

The very first poem in this volume sets the tone. Titled "Pirates and Progress", it starts with an accusation against the U.S. government of stealing one of Wing's ideas, for a helicopter design that he submitted in 1917. I am no expert in this field but it seems the unique feature of Wing's design was that of coaxial rotor blades - by no means an original idea to him, at least according to Wikipedia's page on the topic. 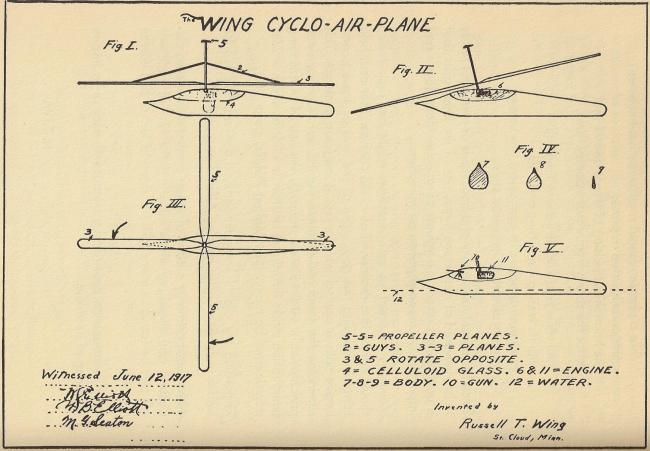 Wing, though, was convinced he had been robbed of recognition for his invention:

For in the Patent Office stands
the proof that all may see —
There stands in perfect detail that
invention done by me
But in that patent nowhere is
due credit to to be found ...
just evidence that I received
a shunted run-around.

Then too, the application date
is two years past beyond
that day some minor bureaucrat
saw mine in trust and bond.

Having had his grumble about this iniquity, he effectively turns the other cheek and presents a series of ideas for the improvement of the automobile

but this time I will not expect
reward for what is mine.

His vision of the future of motor transport is remarkable, if not entirely on the money.

Its wheels will not be seen or heard;
no tires will it have;
and like a mobile hotel room,
may even have a "lav".

And tho you speed across plowed fields,
its gentle glide will make
you feel like you are in a boat
upon a placid lake.

Forever gone will be the fear
of blowout or of flat.
The treads will last the life of car —
a million miles, at that.

The treads will be metalic belts,
spring-bridged between the wheels,
and rubberized with non-skid face
which never cracks or peels.

The car of the future will also have neither front nor back, being able to travel equally well in either direction, it'll have a non-polluting super-efficient motor "in the treads", and headlamps on its roof. The driver's seat will swivel to face the direction of travel, though how this will work when there are passengers on board is not explained. He does mention that the seats "convert to beds" so perhaps any passengers have to remain horizontal so as not to obstruct the field of view.

The only things stopping this marvel being a reality are apparently the dual curses of taxation and patent law.

Not only can you lose today's
invention if you're lax;
incentive too they're stealing with
confiscatory tax.

But, these are only part of the
offenders of the day —
The patent laws and rulings are
long moldy with decay.

In fact, with great inventions, like
a 'copter or a car,
the lone inventor seems to have
poor chance of getting far.
For by the time the thing is done;
perfected and on sale,
the patent has expired or he
is litigated pale.

Further poems follow on similar topics, including one prescient plea that car engines be designed to use less gas when idling. But solving the problems of the motor industry is merely a warm-up to tacking those of the entire economy, with the advent of:

"Reasonism" is Wing's new political philosophy ,"Common Sense in Capitalism" as he sloganises it, and he returns to prose to expound it.  As I understand it, the logic underlying Reasonism is that the twin evils of inflation and unemployment give communists easy targets when it comes to criticising capitalism. He's not against automation as such but he thinks it should be possible to "tax the machines" when they put people out of jobs in order to balance the social ill. This disincentive to automation would ensure full employment and somehow banish inflation as well. His vision of utopia, in which there are more hand-made goods and more people work on the land, is almost akin to that of William Morris's doctrine:

It is right and necessary that all men should have work to do which shall he worth doing, and be of itself pleasant to do; and which should he done under such conditions as would make it neither over-wearisome nor over-anxious.

Reasonism, as one would expect, is also expressed by Wing in poetic form and there we find a clumsier statement of a comparable idea, though with more emphasis on meritocracy and individualism:

Since time began there's been the snow,
yet never have there been two flakes alike.
And so with men, no two are made the same,
yet all deserve to grow with equal right.
Some folks are dolts, and others genius bear;
and in between these, variations stand,
The Reasonistic system brings to each,
opportunities and the great assurance that,
rewards will follow for achievements made.
This system mus therefore assure that those
deserving shall receive rewards, and those
of small reward shall wait their turn to rise,
befitting their capacities and hopes,
individuals must be paramount and free;
and government-competing must not be.

Wing, being an ardent anti-communist (this volume also contains an ode to McCarthyism), probably never read Morris and would have violently rejected any such comparison.

If Reasonism does not appeal perhaps Wing's next wizard wheeze would be more to your taste? He had observed the unedifying tendency for motorists to litter the highways, and came up with his own eminently practical solution.

Nature clubs and automobile clubs might offer a promising service and a worthy "game" to their members by conducting a Rule of the Road campaign.

Let kits be made available, perhaps priced at $1.00 each. A kit to consist of a membership sticker and a shopping bag or a carton with a handle: each to be printed with the first two stanzas from the pledge found in The Golden Way.*

Upon the purchase of a given number of kits or upon the approval for outstanding service, an honorary plaque could be won.

Let all receipts be applied to further the cause. The results could be very interesting.

The stanzas in question come from another lengthy piece of doggerel, this time with the worthy aim of getting people to take their litter home with them.

Today I pledge myself to live
within our Free Domain
by action as intended in
The Golden Rule of man.

Not only will I leave no trash
defacing God's design,
but I will condescend to stoop
and gather more than mine.

Stirring stuff, and it is truly a wonder that none were inspired to take up the cause. A bag with those words printed on would just shriek "I am a better person than you" and isn't that what we all want for ourselves?

No? never mind, Wing has yet another brilliant project for us, the Alfonet (no relation). The Alfonet is a proposal for spelling reform, a phonetic alphabet - see? Unlike earlier schemes whereby letters not strictly needed such as "X" (which can be replaced by "KS" or "Z" as appropriate) would simply be dropped, Wing's idea was to re-use the redundant letters, but as vowels, specifically their short forms. The existing vowels would be retained but only for their long forms. "X" would be a short "A" as in "cat", while "A" would represent the long form as in "car". The word "Alfonet" itself becomes "Xlfonct" in this formulation. To give you a better idea, here's a sample verse which I'm sure will convince you of the simple brilliance of Wing's approach:

This is not Wing's only assault on the conventionalities of typography: he also has a go at punctuation in a short piece with the intriguing title of "Midget Pitfalls". Punctuation marks as traditionally printed are too small, he avows, and they should be much larger to reduce the risk of confusion, and indeed throught the book this rule is followed, giving it a slightly odd look. No social evil is too petty for Wing's consideration, evidently.

Let puny punctuation be
forever dead and gone;
cast out those midget pitfalls made
for minds to trip upon!

Were this abundance of new ideas not enough, Wing gives us other verses supposedly humorous and inspirational. And, yes, they are as dreary as you might expect, so I'll not excerpt them here, but I think I have demonstrated the range and quality of Wing's ideas. As his blurb puts it:

Let rhythm and reason bring to jell
our perilous modernistic spell,
and show the "rhyme and reason" for
the fates that long beset our door.

Let minds, mature or blessed with youth,
behold the values that the truth
can bend to our subservience
when guided by Uncommon Sense!