Wildman of the Woods 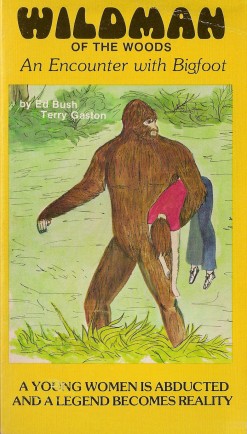 Suppose for a moment that you are Ed Bush, and you, together with your pal Terry Gaston and some other friends, are making a movie about the legendary "Bigfoot", America's very own yeti. While shooting on location in Humboldt County, California, one of your party, a young woman, Cherie Darvell, is abducted by one of the very beasts in question. What an astonishing and terrifying occurrence!

Fortunately after a couple of days' absence Cherie reappears, apparently unharmed and in good shape. You no doubt have mixed feelings of relief and exhilaration. Once you have recovered from the shock and have reassured yourself that she is unmolested and untraumatised, your thoughts turn to the opportunity that has been granted you: at last, you think, here is the chance to tell the true story of Bigfoot and convince the world of his existence. And if at the same time you can publicise your movie, well, that's good too.

So you and Terry set out to write a book to spread the word. As the most compelling part of your message will be the story of Cherie's abduction, naturally you depict this incident on the cover, though rather than employing a professional illustrator you get a kid from the nearest high school to draw it. Why waste money on competency? That is not your way.

With such a cover, the reader might be led to expect that you would immediately deal with the matter in question. But that is not your way, either. Your way is to leave all discussion of Cherie's experience until practically the end of the book. I guess you have the idea that this is your climax and it should therefore be held back as long as possible, like tantric sex.

So - just as with tantric sex in fact - before getting to the crux of the matter it is necessary to get through a lot of confusing and poorly-executed padding. You commence with a discourse on the nature of the creature:

We give him his name "Big Foot" from the enormous size feet [sic]. His tracks have been found measuring up to 17-20 inches long.

It is not known for such [sic] just how long this type of man has existed but we are aware that the numbers of these individuals are quickly decreasing. If this ape-man did evolve from the first forms of man, then why hasn't he developed as the previous men have. This is a very puzzling question that leaves [sic] many to think it is possible this man has come from another planet. 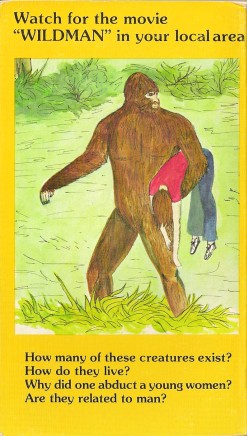 - then move on to a fictionalized account of the life of one of a group of Bigfoot, which moves judderingly from the third person to the first and back again, for no clear reason:

He was quite possibly the most dangerous beast in the mountains. [...] He stood over eight feet tall and weight about six hundred pounds or more. [...]

From the darkest corners of his mind, he began thinking of his life and the signs of man he came across. Traces of his past quickly flashed by as remembered distinctly the first man he had ever seen. It was in the land of ice in the far North, where nights were so short and days were very long. He was very young at the time and lived with his natural family.

The man he remembered was very small and had a dark tint to his skin colour. His body had been covered fully with the hides of the white bear and wolves. I will never be able to forget the putrid smell this man had about him...

Since it is not your way to stick to a single narrative mode, the reader will not be surprised that when you and Terry turn up in the story, some 80 pages in, it is in the third person. A Bigfoot, the son of the one we met earlier (the Bigfoots - Bigfeet? - at least have been productively mating while we wait for you to get to the point), is spying on a group of people in the depths of the woods:

It was on this day that he got his first look at the strangers that would make a definite change to his life. Although he had no way of knowing this groups [sic] intentions, he remained peering through the brush catching even the slightest detailed movement. As they began unloading the strange looking equipment, he was eagerly awaiting the chance he might get to snoop through their belongings that intriqued [sic] him.

Among this group, were two well experienced outdoors men and photographers to lead the expedition. Ed Bush and Terry Gaston had been interest [sic] in wildlife from the time they were born, since both had been born and raised in the back country of Montana & Idaho.

As experienced outdoors men you have come up with the idea that the best way to trap a male Bigfoot is to lure him with "marshmellows" flavoured with the urine of human females and their menstrual blood. (As these are not commercially available, you have to create your own.) Over the course of several days you set traps thus baited but are unsuccessful in catching anything other than scraps of hair until, on May 22, 1976:

At about 11.00 a.m., when Kathi [Bush, Ed's daughter] and Cherie arrived at the last trap within everyone's sight. All hell broke loose. A frightening scream rang out down the valley as Kathi was brutally pushed down the bank by a gruesom [sic] looking figure that had appeared out of nowhere. Ed immediately turned his camera towards the screams as he captured on film, the hairy giant as it picked up Cherie in one arm and made its way into the thick timber.

Wait a minute, Ed. Oh, Ed, Ed. By your own testimony, rather than trying to rescue the poor girl, you concentrated on filming the incident. I don't want to think of you as a selfish, uncaring bastard (especially as you aren't really Ed, you are some lucky visitor to this web page who is doing his or her best to keep up the pretence), but that's what your own words imply.

It is not until the beast is out of sight that you set off in pursuit but to no avail. It, and its unfortunate prey, Cherie, have vanished. Kathi is understandably somewhat hysterical (perhaps partly in shock at the callousness of her father) so you decide to take her to hospital. On the way you meet the local county Sheriff and belatedly raise a general alarm.

The end of the story we already know. Puzzlingly there is some disagreement between your book and accounts in contemporaneous local newspapers. You tell us that:

She was hardly recognizable to her friends as she was bruised and torn severely. [...] Her hair was a tangled, matted mess and she had several cracked ribs.

Yet newspapers of the time report that Cherie smelled sweetly of perfume and was remarkably clean when discovered. How can this be? And there is a curious lack of willingess on the part of the authorities to believe in your story. It's almost as if they think you were involved in a hoax, and wasting their time at great expense. Oh, Ed, Ed. Say it's not so!

Ed's my grandfather. He…

Ed's my grandfather. He always tells this story. Kathy swears by it. He heavily disputes what was said in the paper about Cherie. He actually used to show the film in local theaters and the story goes the FBI approached him and made him stop. I've seen his films before and although we dont have a way to play them any more, you can kind of make out the shadows in the film under the light.

I love 'weighed about six

I love 'weighed about six hundred pounds or more': well, which is it? About? Or more? That said, most BBC and newspaper journalism does exactly the same most days of the week. And 'quite possibly the most dangerous beast in the mountains': again, make your collective mind up! All this grammatical nitpicking is a way of not dealing with the appalling story (sic) and the magnificent cover art - it was B. Kliban who talked about 'nephew art', and this is a prime example. (Hey, if Ed captured the abduction on film, why don't the authors use a still from the film? Oh. Right.)