You Are Becoming a Galactic Human 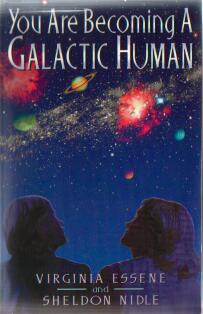 If there are aliens out there, they are having a good laugh at our expense: that is the message I take from this piece of 1990s Californian wackery. For example, here's an early passage:

My name is Sheldon Nidle and I have been appointed as a representative of the Galactic Federation. This position has been given to me by a Sirian counselor and galactic presence named Washta.

You may sense that Sheldon is somewhat lacking in the critical faculty department. A more sceptical individual might have wondered whether "Washta" was qualified to make such an appointment. (For all we know, "Washta" isn't even his real name!) For reasons we may only speculate about, I suspect that Sheldon became the target of a gang of con men from outer space, intent on eating his brain or some other equally felonious activity.

Whoever Sheldon's contacts were, they were certainly secretive. Rather than landing a spaceship on the lawn of the White House, they preferred to manifest themselves through what is known as "channelling" - in which invisible beings communicate in a manner indistinguishable from the pratings of nutcases or fraudsters. Sheldon, the vessel, or ventriloquial dummy, would emit the words of Washta while his pal Virginia Essene wrote them down for the intended benefit of humanity.

Unfortunately, though, Washta and his gang sold Nidle and Essene a great steaming pile of horse feathers. According to them:

... your solar system is presently poised to enter a vast region of light called the photon belt sometime during a period between March of 1995 and December of 1996. This photon belt—a huge mass of light—will be the vehicle for your restoration to full consciousness and for the complete transformation of your DNA and chakra systems. These unbelievable changes will forever alter not only yourselves, but also your planet and your solar system. This is because the photon belt will move your solar system Into a higher dimension (from 3rd to the 5th), allowing your planet, within the solar system, to move to a new position in space closer to the Sirius star system.

... you are moving from a 3rd-dlrnenslonal physical reality to a 5th-dimenslonal (semi-ethereal) reality. You are moving into a world in which all minds share a common consciousness and human beings no longer have the kind of separate world that you presently have. You are also moving to a consciousness where things can be done by humans that would, at present, be considered miraculous. Therefore, every Earth human must understand what his/her capabilities are and what his/her realities mean.

This education project is what the Galactic Federation will be sharing with you before the arrival of the photon belt. Once you have learned to regulate your new consciousness process, it then becomes necessary to understand how you control and utilize thought forms; how you communicate properly with those that have previously died; and how you use this knowledge to aid yourself and others. This entire process will be taught to you by counselors who will land on your planet before the photon belt arrives  As this education continues, humans will see that the population must operate as a vast web of Interconnected consciousness

After you learn some basic qualities of galactic humanness. you can enjoy having a lighter body and using thought forms to rejuvenate and overcome aging. You will also have the ability to communicate within your own being, with other people, plants and animals including Lady Gaia herself. You will also have full communication with those who have died in previous times as well as those who might today be called angels or archangels. In short you will become both a being of spirit and a being of the physical.

Imagine how disappointed those who fell for Washta's scam must have been when, instead of being transported to a higher dimension, having their DNA upgraded and getting that lighter, more communicative body they'd always dreamed of, they were offered the chance to buy Windows 95. What a swiz.

this message from writer is

this message from writer is for people, who want to listen. if that message makes you laugh, then you are not ready,sorry.

Why exactly should we listen

Why exactly should we listen to someone who back in the 1990s made confident predictions of extraordinary events that failed to occur? Sheldon Nidle was and is a ridiculous loon, and if you believe his twaddle you are an even bigger idiot.

Thanks to this book, I look

Thanks to this book, I look at my teenage life with utter contempt. My mother moved us out to the countryside because she thought we the world was going to be dark for 3 days. I had no friends, no way of getting to do things, I missed out in the key part of my development as a person. When others reminisce about the fun times they had as a teenager and feel angry and depressed. I want the author of this claptrap to know that I hope they get hit by a ****ing truck.
Submitted by Anonymous (not verified) on 09 Jan 2012 - 09:20 Permalink

Why do we find it okay to

Why do we find it okay to laugh at things/people just because it/they are different or because we don't understand. It's okay if you don't understand, or don't want to understand, but we shoudn't redicule those that do... should we? I think even the most hardened person deep down knows its cruel... We should all have something to believe in... This is becoming a horrible and cruel world and to be honest i have been saying for a long time something needs to change.... We have all become so materialistic and selfish, things need to change to make this a better place a place where you don't have to worry about what kind of future our kids will live in.
Submitted by pseudonym (not verified) on 10 Jan 2012 - 02:52 Permalink

Something? Just one thing? I

Something? Just one thing? I think your premise is severely flawed, becoming horrible and cruel? Was it better during the inquisition, the punic wars, the holocaust, it's always been bad but the world is less violent than at any point in known history. The irrational beliefs of the fools we laugh at lead to genocide, torture, intolerance, if they feel bad for having their beliefs ridiculed that's not my fault just the faulty wiring in the human brain. If reason and evidence could persuade crackpots I would use it exclusively but they just dig in deeper, not their fault either our brains aren't built for logic, I laugh because the alternative is to scream and rage and that is definitively the worst method.
Submitted by Anonymous (not verified) on 25 Feb 2011 - 06:10 Permalink

Hi, can I get this book in

Hi, can I get this book in Popular or any else bookstore?Pls reply asap.Thanks.
Submitted by Alfred Armstrong on 25 Feb 2011 - 10:25 Permalink

It's available on Amazon

Hey! I thought I felt kinda

Hey! I thought I felt kinda funny when I woke up this morning. I attributed it, at first, to the hangover I incurred the night before. But, no. No, I can feel it. I'm becoming a galactic human. That's it.
Submitted by Anonymous (not verified) on 12 Sep 2009 - 02:18 Permalink

Here's a youtube where you can see Sheldan in all his balding, gap-toothed glory giving us the layout of a Sirian mothership. If you can get through it without being put to sleep, you're a stronger person than I. http://www.youtube.com/watch?v=cfb5hA_sQLE
Submitted by Alfred Armstrong on 23 Sep 2009 - 18:49 Permalink

They want you to sleep so

They want you to sleep so they can take over your mind. Don't watch the video whatever you do.

Those Sirians are at it

Those Sirians are at it again! They're such pranksters. Evelyn Fuqua wrote about the time they swapped souls with Rose/Athor, and it was a hoot! ... if you define "hoot" as "seriously disturbed woman possibly suffering from delusional schizophrenia," I guess.
Submitted by Anonymous (not verified) on 06 Sep 2009 - 23:40 Permalink

Scroll down below the

Sheldon Nidle is very much

Sheldon Nidle is very much ongoing, with weekly updates from the first-contact team, at http://paoweb.com/updates.htm