The Fourth Dimension and The Bible 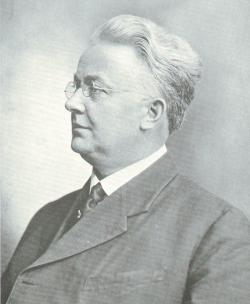 William Anthony Granville had a distinguished career as a mathematician though one online source mentions some unspecified controversy during his tenure as President of Gettysburg College. The Fourth Dimension and The Bible was printed by a vanity publisher, so it was at his own expense and probably at a loss.

To be honest, I was not expecting to be able to say very much of interest about this rather drab little volume, but I took it to the park with me to browse through in the sunshine, hoping for inspiration. It was warm and I had lunched well, so at some point I may have dozed off. Hours must have passed because when I awoke it was dusk. I felt rather befuddled after my nap, and was further disconcerted to hear a voice addressing me from within my own stomach, or so it seemed.

"Who's that? Where are you?", I replied in a low tone, prodding my belly tentatively with my forefingers.

"Oh! Sorry", it said, "Where ARE my manners. One moment while I manifest myself more acceptably". There was at once a very odd noise, as if space itself were being unzipped and zipped up again, and something looking like a man-sized bunch of grapes appeared swaying before me. Alarmingly, each 'grape' of the bunch resembled nothing so much as a human buttock, being as they were so fleshy and hairy and tremulous. I blenched at the sight. What WAS this?

"No, that's not what I intended. Decidedly not", it said, and performed a rotation, as it seemed, on an axis somewhere out of our universe altogether, transforming itself by this ingenious means into the semblance of a middle-aged Victorian gentleman of sober disposition and dress .

"My very sincere apologies for this  unconventional entrance, my dear Mr. Armstrong", he said. "I have not visited your world in many decades, and am very much out of practice. Permit me to introduce myself. My name is Edwin Abbott Abbott." And he bowed his head in greeting.

"THE Edwin Abbott Abbott? The author of Flatland?". Delight and disbelief pervaded me. Abbott’s work was one of those special books I'd discovered in the voracious reading of my youth. It had entranced me with its mixture of whimsy and profound mathematical ideas.

"You know my work? How gratifying. But I understand you are a collector of books so perhaps that is not surprising. And that fact reminds me of my mission today: I have come from from dimensions beyond to warn you about the one you are reading." He reached out and plucked the book from my lap and held it up disdainfully.

"William Anthony Granville followed in my footsteps as a mathematical proselytiser. He shared my own interest in the possibilities of higher dimensions. Also like me, he was a sincere Christian, but he ventured to unify the subjects of mathematics and theology, and in so doing he fell into a dangerous heresy. Before you write about it on the Internet where billions might read your words, it is my duty to make this clear to you.”

“How extraordinary, Mr. Abbott,” I said. “I would not have thought it necessary to come all this way from … erm … wherever it is you now reside, just to talk about this weird little book.”

"It is no trouble at all, really. In fact the next world is a lot closer than you might think.” He gave a little sad smile, and I shivered at his meaning.

“Granville’s book contains much that is reminiscent of Flatland, I would venture to say”, he went on, “but as I said he had an altogether more ambitious goal. To shed light on the very mysteries of our common faith, indeed! And to do so using those very tools I spent so much of my own earthly time on, the mathematics of spaces greater than three dimensions. Here for example,” and without needing to look for the page, he opened the book to the place he wanted, and read aloud.

“The Bible abounds with numerous accounts of celestial visitors (angels, archangels, prophets, and God himself) revealing themselves to inhabitants of our earth. In view of our discussion it is near at hand for us to think of them as coming down from the higher dimensional spaces in which they dwell and, after having fulfilled their missions in our three-dimensional space, to again ascend on high.

"As a reader of popular science and mathematics books, you probably understand what he is saying here, but I have the habit of explication and must indulge it. Please bear with me.” He paused a moment in thought and then went on.

"A being (such as myself) who exists in four dimensions can enter a three-dimensional space (such as yours), appearing as if out of thin air. An analogy you might find useful is that of a swimmer who steps into a shallow pond. If there were two-dimensional creatures living in the surface of the pond their world would seem to have been invaded by two roughly circular entities moving through it in sudden thrusts. These intruders would be in fact just cross-sections of the swimmer's legs, but the creatures of the surface being unable to see - or even conceive of - what is above or below, would experience them as separate.

Some cubes visiting a two-dimensional world.

"It is this ability to pop in and out of your universe at will that Granville claims may explain certain Biblical miracles, do you see? God and his servants belong to a world beyond. May it not be subject to the laws of mathematics just as this one is? Or so he might ask.”

I frowned. “Hold on, isn’t there a problem with this idea? When you appeared to me a few minutes ago you were clearly struggling with the mechanics of entering our space. It’s not really surprising, actually, now I think about it. A four-dimensional being entering our space appears as a slice of itself. To go back to your analogy of the surface of a lake, I don’t know what the creatures living there would look like but not the cross-section of a man’s calf. It’s very strange that you manage to look so like a human being now, as seems very unlikely that you could manage it.”

“Yes indeed, well observed. You have detected one of Granville’s errors. The truth of the matter is that I am not actually here at all, this body you see is just a mask, a recreation of how I looked when alive, not how I am now. Unfortunately our true forms are so alien in their outlines that to see even the shadow of one as it impinged on your world would drive you insane. Hence we have to use machines to represent ourselves to the inhabitants of lower dimensional realms. One selects the form one wishes and it is projected holographically into your spatial continuum. At least, that is the intention: as you may have gathered, the device I am using is rather badly maintained, hence my rather inelegant entrance a few minutes ago.”

He frowned apologetically. “Anyway, to return to the subject, Granville is not content to confine himself to the comings and goings of divine beings, but has other fish to fry, so to speak,” and he opened the book at a fresh passage.

“Numerous instances are recorded in the Bible where new matter or new energy was apparently added to our material universe by supernatural means. The manna falling in the wilderness, the ever replenished oil in the widow’s cruse and the loaves and fishes which fed the five thousand, all this food may have been the three-dimensional sections of higher dimensional supplies projected at those particular times thru our space by some higher agency.”

“Is four-dimensional food good for us to eat?”, I wondered. “Again, it seems like your man Granville is making somewhat optimistic assumptions about the nature of higher dimensional realms .”

“I wouldn’t recommend it for human consumption, no.”, Abbott said, plucking a wriggling fruit-lizard hybrid out of the air and mock-offering it to me before making it vanish again. “And, anyway, a God who created the entire universe can rustle up a few loaves from nothing if He chooses, without having to raid the four-dimensional larder for left-overs. There is also the matter of time, which Granville makes a right hash of, if you’ll pardon the expression. He seems to have thought that this hypothetical extra dimension in which God dwells could also be that of time, as he writes:

“If time is but the way in which we perceive the fourth dimension, then our spiritual selves, being higher-dimensional, are independent of time, outside of time, that is, eternal.

“Absolutely,” I nodded. “Even if time is an extra dimension then we already exist in it. To step outside of it would require one more dimension at least. How many more does he need?”

“He’s very gung-ho with his dimensions,” said Abbott, “and to write about the relationships of space and time in 1922 without so much as mentioning the work of Albert Einstein smacks of churlishness. Einstein may have been an agnostic but he surely did a lot more than Granville to shed light on the subject.”

“This is all very interesting,” I said. “But although he was clearly somewhat misguided and carried away by his own enthusiasm I fail to see why you think Granville’s book is dangerous.”

“Have you not guessed?” He brought his face close to mine and I saw in the eyes a strange flickering, that might have been the fires of Hell. “Actually, he was RIGHT. “

And with that, whoever or whatever it was I’d been talking to disappeared in a sudden blaze of light, taking the book with him.

You might guess I shall not be seeking another copy.

Great stuff! I'll be keeping an eye out for this one. Sort of.

I think I'll just wait for one to appear.

I do not think that God resides in the fourth dimension. It seems more likely to me that he would reside above the firmament of our flat earth. Einstein was a hoax though.

MODEL EXPLAINS HOW THE HOLY SPIRIT IN A CHRISTIAN OVER COME HIS BOLDLY TAKES OVER WHEN HE IN CHARGE AND THE WILL OF THE FATHER IS DONE.. WE ARE INDEED NEW CREATURES IN CHRIST.

YOU MUST BE BORN AGAIN ASK JESUS TO SAVE YOU AND HE WILL . HE ADDS THE HOLY SPIRIT TO US AND WE ARE THUS NEW CREATURES..

ROMANS 3:23 ALL HAVE SINNED AND COME SHORT OF THE GLORY OF GOD. ROMANS 5;8 :8UT GOD COMMENEDETH HIS L;OVE TOWARD US , IN THAT , WHILE WE WERE YET SINNERS, CHRIST DIED FOR US. ROMANS 6:23 fOR THE WAGES OF SIN IS DEATH,;BUT THE GIFT OF GOD IS ETERNAL LIFE THROUGH JESUS CHRIST OUR LORD JESUS PAID THE DEBT WE COULD NOT PAY AND GOD ACCEPTED HIS BLOOD, AS PAYMENT FOR OUR SINS. ROMANS 10:13 FOR WHOSOEVER SHA;LL CALL ON THE LORD SHALL BE SAVED.
CALL ON THE LORD IN PAYER ASK HIM HE IS GRACES AND KIND

GO NOW AND TELL OTHERS OF THE FREE GIFT OF SALVATION AND LIVE A BLESSED LIFE. GO TO A CHURCH THE WILL BAPTIZE YOU AND YOU HAVE ETERNAL; LIFE BEFORE BAPTISM, YOU GE BAPTIZED BECAUSE YOU LOVE JESUS .