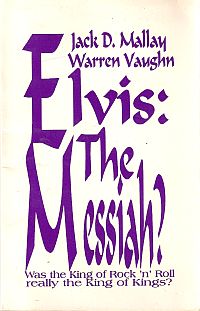 This book asks a simple question: was Elvis the Messiah? Plainly, he wasn't but the authors do their best to find evidence pointing in the opposite direction. Unsurprisingly, they don't really find any: what they do instead is supply a number of anecdotes relating to Elvis's "spiritual qualities" which depict him as just about qualified to run a gift shop in Glastonbury.

To help you make up your own mind, here's my Top 10 selection of their reasons why Elvis might have been the Messiah.

#10. Elvis died by the numbers

Elvis was "an acknowledged expert on numerology" and often consulted "one of the classic texts, Cheiro's  Book of Numbers". By some tangled logic:

With the number 2001 and the number eight both being critical, Elvis had little choice, numerically, but to initiate his duel with death on August 16th, 1977. No other combination of dates would work.

2001 is apparently the year Elvis was supposed to return. Hmm. The authors don't explain why the "duel with death" took place on the toilet but perhaps the number two was significant.

#9. Colonel Parker was a Yeti, or something

Elvis's manager, Colonel Tom Parker, was a notoriously shady character whose true identity has been the subject of some debate. Mallay and Vaughn dismiss the generally agreed story that he was a runaway Dutchman, and proffer a more likely alternative:

Our research indicates that Colonel Parker has direct ties to the "Snowmen's Club", a secret society directly tied to the mysterious "Masters" who live in a secluded mountain hideaweay [sic] in Tibet.

Having read the works of T. Lobsang Rampa, I know just how much of this sort of thing goes on over there. Those damned mysterious foreigners and their inscrutable ancient wisdom!

#8 Elvis wore a calendar on his chest

One of Elvis's costumes at his last concert had an Aztec calendar on the front. The authors claim excitedly that the Aztec Calendar is "even today, more accurate than our own". This is, in short, utter bull.

According to the mathematically precise Aztec Calender, the earth will complete a twenty six thousand year cycle in the year 2012. According to legend, this completion will be heralded by a great seer and prophet. The Aztecs call this seer Nanahuatzin. The Sun King. Elvis Presley, the king of rock-n-roll, made his first records at Sun Records. Elvis Presley, the King, also wore a jumpsuit with the Aztec Calender on both the front and back at his last concert. Was this a sign? A clue to his fans and followers that Elvis was the one to lead us into a new Millennium?

A rather obscure clue, perhaps, especially as Elvis was supposed to come back in 2001. Perhaps it was a clue that he liked hideous gaudy stagewear.

#7 Some of Elvis's song titles are vaguely meaningful

The important ones are those recorded on sessions where the date adds up to 2001, of course. Since Elvis was in the studio a lot, there are quite a few of these. On one occasion he recorded gospel songs when it was Halloween, so obviously he felt in need of spiritual protection. The fact that he didn't record such material on every Halloween, and that he also recorded it at other times is of course irrelevant. But other sessions are also of profound significance:

September 2,1956 - "When My Blue Moon Turns to Gold Again." Again, paying close attention to the night skies. Should be try to decipher this by calculating when the blue moon will turn to gold? Not being astrophysicists, this would take us several months. Any amateur stargazers who can help with this. your help would be appreciated.

September 3,1956 - "Anyplace is Paradise." More philosophical statement. Could we form an entire code of ethics from this body of work? Probably.

Astonishingly, I don't think they are joking.

Elvis apparently was reading a book about the Shroud of Turin at the time of his death. Extraordinary.

#5 Something about Elvis and crop circles

The authors struggle valiantly to involve crop circles in their argument, but despite their talent for vague connections and exaggeration fail to find any association with Elvis whatsoever. Needless to say, they still include a chapter on the subject.

#4 Elvis had powers of healing

At a hospital one day, a pregnant woman stopped screaming in pain when Elvis laid on his big ol' hands. She was possibly just struck dumb by the fact that it was OHMIGOD OHMIGOD OHMIGOD ELVIS PRESLEY, but the authors attribute this supposed occurrence to Elvis's special powers, of which they produce some other slim anecdotal evidence, of which this is the climax:

There are even reports — as hard as they may seem to believe — that Elvis could not only heal humans, but that his powers extended to the plant kingdom as well. Friends tell of his ability to cure houseplants or crops that were diseased or even dead And there are stories that he could make plants move by sheer force of his will. Unfortunately, no authoritative substantiation exists for these claims, so we will have to be content to speculate.

Yes, that's the way to get to the truth, chaps.

#3 Elvis was abducted by aliens

According to the authors, Elvis and his friend Sonny West witnessed a UFO incident during which Elvis was abducted. (The source of this story may be "Elvis: What Happened", by Steve Dunleavy, but I don't have a copy so can't check.)

It's well documented that Elvis contacted President Nixon, asking for a meeting. The ostensible reason, that Elvis - laughably, considering his own issues with drugs - wanted to be a special agent for the Bureau of Narcotics, is too boring for Mallay and Vaughn. No, Elvis must have had a special message for Nixon, because shortly afterwards the US re-established relations with China, and Nixon made the famous visit where he shook hands with Chairman Mao.

After all, of all the people Nixon met and discussed with, who was better qualified in international affairs than Elvis? A man, let us not forget, who had travelled extensively to both Germany and Hawaii.

#1 Elvis appears in The Satires of Juvenal

There is a reference in Rolfe Humphries's translation of Juvenal's sixth Satire to someone called "Elvius", who from context seems some sort of popular entertainer of the day with a soft and seductive voice. Mallay and Vaughn get very excited about this and suggest that Juvenal in this line:

Croon in the smoothest tones that an Elvius ever might gurgle, You will flutter no dovecotes;

is talking about an ancient "imitator" of Elvius/Elvis. However, is very plain that the person to whom the line is addressed is not singing but speaking like a young lover - and making a fool of himself because of his evident great age. So we know nothing about this Elvius/Elvis except that he had a nice voice - and the other translations I've checked don't even bother to mention him. For all we know he may not even have been a singer.

Mallay and Vaughn wind up by comparing themselves to Galileo, another man whose beliefs were unpopular at the time. But they are not heretics, merely idiots. It seems unlikely that this book will be banned by the Inquisition, though one can always hope.

Perhaps if Elvis would have

Perhaps if Elvis would have got to a drug rehab center this "messiah" would still be walking among us today.
Submitted by Anonymous (not verified) on 27 May 2009 - 18:56 Permalink

This is obvious nonsense.

This is obvious nonsense. Everybody knows that Elvis was abducted by aliens. He was trained as a marksman and sent to earth to assassinate John F. Kennedy, after which he returned to the planet Tralfamadore where he is living in a menage a trois with Marylin Monroe and Jimmy Hoffa. The aliens left a simulacrum in his place to divert suspicion. The simulacrum did not work very well -- it wasn't built to last -- and required a bizarre diet and megadoses of drugs to keep going. Even so, it got increasingly bloated and strange-looking, and finally wore out after 15 years. You can't prove I'm wrong.
Submitted by Anonymous (not verified) on 25 May 2009 - 19:38 Permalink