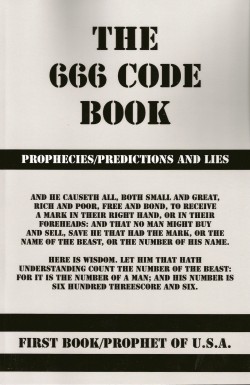 This is not a book to be read from cover to cover except by the most committed of individuals. A reference work of ambitious scope, in some 663 pages it contains more than 19,000 individual entries, each being a numerological equation consisting of two phrases having the same number according to the "666 Code", a system in which, as in the usual fashion, every letter of the alphabet is assigned a different numerical value. By summing together the numbers corresponding to the letters in a phrase you may derive its code number. One assumes the numbers chosen in this instance are of the author's own devising - not that that makes any difference to the uselessness of the result.

In the author's mind there is doubtless some arcane significance attached to the equations, but to those of us not gifted with the same insights they will seem obscure, as you may judge for yourself from some examples:

The equations are organised under a curious series of headings, the scheme of which again suggests an original mind at work, given that these topics include such as:

In the chapter on MENTHOL PIES (a topic even Google is unable to shed much light on), there appears one of the author's very rare prose asides, and it's a marvel:

IN MY INVESTIGATION INTO MENTHOL PIES I HAVE ALSO COME ACROSS OTHER PIES THAT MAY OR MAY NOT BE MENTHOL PIES.

And a few lines later we learn that:

Which, on reflection, is as true as anything in this uncertain world.

'Menthol Pies' may well be

'Menthol Pies' may well be the title of my next album. It means, of course, that Paul is dead.

Is there a preface in this

Is there a preface in this volume? This sounds, or well, reads like a phonebook from a southern US cult where nobody is able to explain what the 'PHONE' is. As to the title: is there any entry reading (666)=(666)=1 or anything like it? Besides future oddbooks reviews I truly hope "second book/prophet of U.S.A" wil be an internet volume only - for those communities not devoid of bog rolls.

There's very little prefatory material, Martin. Just the numbers he gives to the alphabet and a series of equations in the same style as those I list which are presumably meant to explain the code but of course don't. There's only a very few examples of actual prose in the entire volume, one being the menthol pie one.