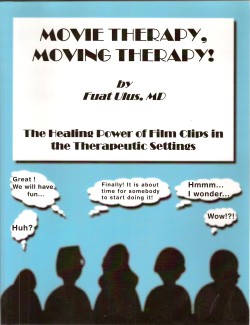 Fuat Ulus's book seems to be a sincerely-meant manual for practitioners of Movie Therapy - the use of cinema as a therapeutic tool in mental health. Its purpose, however, is undermined by the author's idiosyncratic English and cack-handed design choices, which are distracting, to put it kindly.

Unlike most of the books reviewed on this site, the author's ideas are essentially reasonable. It may well be the case that those struggling in their mental life may be helped by watching carefully chosen flim clips and discussing them with their peers and clinicians in a therapeutic setting. In  any case that is taken as a given by Ulus: his book is not meant to persuade the undecided but to act as a handbook for those who wish to practice this approach.

That's the idea, anyway, but the actuality is a collection of unintentionally comic synopses of various movies, written in enthusiastic but fractured English and illustrated by the crudest of stick-man drawings. As the cover rightly says "Finally! It is about time for somebody to start doing it!"

Prepare your handkerchiefs ... This is a scary tearjerker!

Here, the tears fall due entirely to the health care realities of contemporary time.

(Wit, 2001). This is a made for TV film starring Emma Thompson. Ulus says it always makes him cry, and I believe him. But then again:

... you will ask what on an earth [sic] Dirty Harry has anything to do with group therapy ... 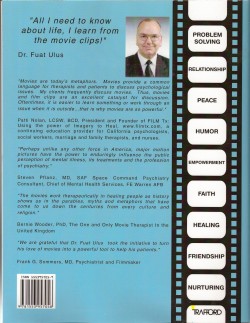 Yes, what on an earth does it?

Harry coincidentally interferes with the coffee-shop robbery carried out by four thugs. He shoots them down, one by one, and the last thug, wounded, takes a waitress hostage while Callahan approaches him. The robber points his gun to his hostage's head while giving Harry a message, "You intend to get me and I will harm her!"

Instead of complying with this threat, Harry continues to point his gun at him and snarls, "Go ahead ... make my day!"

Some deny the representation of something therapeutic in this clip.

Clint Eastwood with a big gun: what could be more therapeutic than that? On the other hand:

It is a harmless movie in that Dudley's character is really in love with his patient, and does not portray a predator sexually harassing the client in those real life stories and fictitious literature alike!

I am not so sure that a fantasy of romance between doctor and patient is all that "harmless", actually. Encouraging lecherous shrinks to think they are Dudley Moore ... what's up, Doc?

Once Ulus had exhausted his stock of startling insights into the cinematic arts, he presumably decided the result was a little on the thin side, as he includes no less than 6 appendices which make up roughly half its content. If you are looking for a filmography of portrayals of psychiatrists, they may be of value as that's what makes up the bulk of them. One suspects that the cataloging of such references is another of Dr Ulus's interests, as knowledge of the existence of the 1906 film Dr. Dippy's Sanatorium (1906). for instance, does not seem entirely relevant to the practice of therapy.

Another treat for the reader, though again probably of little use to the therapist, is a section entitled "Hollywood Psychiatrists Trivia", which we learn which films feature "the first female army psychiatrist" (The Sad Sack, 1957), "Fred Astaire as a psychiatrist" (Carefree, 1938), and, most importantly.

(If knowledge is power, then this is about half a watt).

In conclusion, if you as a therapist want an excuse to spend your session time with patients watching Three Stooges flicks, you'll need to cite some other work than this one to get your superiors on side. It will however be useful if you are swotting for a pub trivia quiz; just in case the question 'in which movie was the word "psycho-analyst' used for the first time?" might arise.