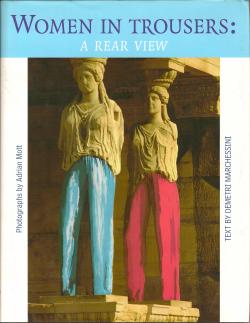 Demetri Marchessini's unusual picture book answers that important question so often asked by women, "does my bum look big in this?" with an ungallant: "yes".

Marchessini, a wealthy Greek businessman noted for his right-wing views and sometime financial support of the UK Indepence Party, says in the short bio attached to this book that he "has always been a great admirer of women, and cares greatly about their appearance". On that basis he presumes to tell them what they should and should not wear.

Women with the exception of lesbians, he avers, only dress to attract men. This is not an original proposition, it's one that can be found for example in C Willet Cunnington's Why Women Wear Clothes. But while Cunnington, like Marchessini, decried trends in women's dress that he did not altogether like, he did not have Marchessini's campaigning zeal to put things right.

... The most important reason why women should not wear trousers is simply that men don’t like them. If one questions women on the subject, they will invariably reply, ‘Yes, I know, men don’t like trousers. They like skirts.’ In other words, women know that men don’t like trousers, yet they deliberately wear them. This is hostile behaviour — they are deliberately dressing in a way that is opposite to what men would like. It is behaviour that flies against common sense, and also flies against the normal human desire to please. Most importantly it goes against one of the basic elements of civilization, of always trying to look one’s best.

Even more worrying, it makes it clear that women no longer care about pleasing men. This is a tenet of Feminist dogma but it is certainly not the way to attract or to charm men. In a country which has the highest divorce rate in Europe, and where the marriage rate is faIling for the first time in recorded history, one wonders whether it is to women’s advantage to behave in this way.

Marchessini's book, in short, has as its purpose to persuade women to shed their habitual trousers in favour of skirts. Since women have thus far failed to notice what seems obvious to him, that trousered buttocks are hideous whereas beskirted ones are alluring, he frames his message in the most unsubtle way, using short chunks of text in very large print surrounded by much white space, together with full page black and white candid photographs by Adrian Mott to illustrate his singular point.

It would appear that women need to be communicated with as though they were children.

We are not told anything about Adrian Mott, though we may surmise that he is the London-based professional photographer of that name. An image of his that I found on Pinterest suggests he does not entirely share Marchessini's dislike of trousers, though he would seem to be just as much a backside man. 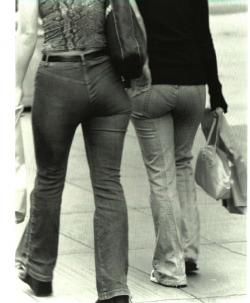 Although Mott's photographs might be seen as unpleasant in their treatment of their subjects, reducing them to objectified behinds, they are not nearly so offensive as Marchessini's commentary, which uses quotes from notable figures to legitimise his own misogynistic critique, thus:

Any article of attire that is worn for the purpose of attracting attention is automatically bad taste.
Beau Brummell.

Are these two young girls aware how much attention their bottoms are attracting?

Of course, when women decide what to wear each morning, they first consider how they can most annoy Marchessini and his kind. Outrageously, they have incited him to pay a photographer to record their crimes and print them in a book. IT IS ALL THEIR OWN FAULT.

Marchessini, of course, is one of those privileged individuals with a direct line to the truth. Whatever he happens to feel is plainly correct in an objective sense. How unfortunate the rest of us are, to experience the world as a confused jumble with little certainty to be found anywhere. Yet paradoxically few of us are so angry with the world as he is: that is ever the burden of the truly clear-sighted.

For those of us who rather admire the look of women in trousers, Marchessini's book can be enjoyed subversively, in the opposite way to what he intended.  Indeed a more flexible person than he is might consider changing its title to Women in Trousers: a celebration and reissuing it without his commentary. This would be a great improvement.

Books like this are the reason the old Soviet Union collapsed.

Returning to Mr Marchessini for a moment, has he seen the Greek national costume of late? Men in skirts? Shouldn't be allowed...

cheers for this book as

cheers for this book as always

on a vaguely related theme have you ever come across a book that was ostensibly about buses but in which every photo of a bus seemed to always prominently feature a passing woman's backside in jeans? I suspect that the author may not have just been interested in buses but I haven't been able to find it since I saw it mentioned in the Sunday Times some 20 odd years ago

I had to grit my teeth to

I had to grit my teeth to avoid saying "thank you for that ask, Eugene". I bet you're glad I made the effort.

The bus book sounds like a find. I don't usually bother with the transport section in bookshops but now I'll have to.