The Death-Life Law of Nature 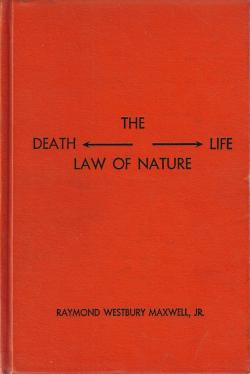 Of the thousands of titles which have been written on the subject of the Death-Life Law, this - Maxwell's original trailblazing bestseller - and its sequel, The Universal Sweep of the Death-Life Law of Nature, are still surely the most authoritative. However, despite its undoubted primacy, it is probably not the best starting place for those new to Maxwell's ideas. Its notoriously challenging prose style and the difficulty of its exposition must act as obstacles to anyone not already familiar with the underlying principles. Maxwell did not believe in molly-coddling the reader, as you'll see from his opening paragraphs, which immediately introduce a succession of novel concepts:

It is obvious that there is a growing divergence between natural physical law and the role enacted by Ihe general organism. This presentation explains the divergence. To do so, it must depart from current belief.

This presentation simultaneously absorbs and rejects what is called "life." At best, life is one half of the death-life inverse split inheritance of natural balance.

This presentation simultaneously absorbs and rejects what is called "knowledge." At best, it is one half of the inverse death knowledge-life knowledge rupture.

Also absorbed and rejected is that which is called "real effect." At best, it is one half of those contra real - real twi Twin Inversions which are temporary substitutes for the death-life inverse inheritance.

Maxwell never explained what must have been to him elementary notions, such as the twi Twin Inversion or the inverse death knowledge-life knowledge rupture. For the beginner who requires a detailed explanation of these I would recommend Schrumpkopf's Death-Life Demystified or Neboule-Zif's gentle and lucid The Death-Life Law for Dummies. 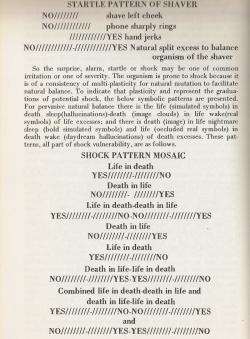 If there is a struggle to be undergone to grasp what Maxwell was saying, it eventually pays dividends. Once one has overcome the hurdles of his thorny writing style and technical language, a dip into this volume will act on the brain like nothing else. It provides a unique kind of stimulation of the little grey cells, as illustrated by this analysis of everyday indecision:

For example, a woman buying a new hat will try on many hats before the mirror. Each time the death image expands preparing to try on the hat (death mismatch); the impulse accelerates to mutate the organism (life mismatch); and the senses five fit hat to head (death-life temporary match), for mirror inspection. Immediately, the image expands contra hat-on-head to prepare trying on another hat. Thus the indecision is between planned image death and organism life while the senses repeatedly seek the decision of a temporary death-life match. Each match is temporary and once again the woman needs to decide a proper death-life match in real symbol. Even after purchase, the image is contra new hat and the woman continues to glance into store windows for another death-life match.

Who else has ever peered so far into the depths of our ordinary existence, where hidden Death-Life conflicts are expressed in every choice we make? When most of us would simply see a woman choosing a hat, Maxwell perceives the underlying "traumatic abnormality" and conveys it to us in a way that no one else can. To drive the point home, here's another example of his insight into the ostensibly mundane:

As mentioned, the death-life law applies to all forms of the one species. The domesticated dog has the image compressed(death) by the trauma of rubbing the nose in its own urine(life) and is then cast outside(death) to urinate(life). After this repeated trauma expulsion-trauma impaction, the dog compulsively goes outside(trauma expulsion) with the need to urinate(trauma impaction). The two are the death-life blur for the natural balance of the dog. Because it has inherited opposite contrasting and contentious inversions which are equivalent, the dog is enabled to balance death and life with the twi Twin Inversive effect of trauma expulsion(death expelling life)-trauma impaction(life compressing death). For memory-learning is the mutual expulsion by death of life-by life of death in repeated proportion.

"Memory-learning is the mutual expulsion by death of life-by life of death in repeated proportion" - let us ponder the brilliance of that perfectly expressed thought. But this is trivial stuff compared to the real meat of Maxwell's thesis, in which disparate elements are woven together to dazzling (if bewildering) effect:

The death image-artificial organism life rend is another view of the correlated IN fantasy-ON fantasy-OUT 1 fantasy-OUT 2 fantasy mutation pattern. Since the organism must depend upon contrast for rapport with real symbol, it scarcely detects its on going mutations into corporeal fantasy. For there is proportionality to the image fantasies, the on going artificial organism fantasies, the on going artificial external object fantasies and the on coming inherited corporeal fantasies. The death-life split widens in multi-proportionality to retain natural balance.

Passages such as the above, so apparently rich in meaning yet tantalisingly just beyond one's grasp, have been much argued over. Professor Genghis Fischpond's long awaited Tractatus Vita-Morte, when it finally emerges into the light of publication, will perhaps give the definitive word on the matter, or it may not.

Maxwell's work does have its critics of course. The factitious Nigel de Vril called the following paragraph "one of the most muttonheaded things ever written". An extreme view, but even Maxwell's strongest defenders concede that this is not Maxwell at his finest:

Maxwell's hypothetical "organism" stands "stunned ... as though waves of numbing shock engulf and paralyze one". De Vril scathingly (and ironically) wishes this organism "would get a life". "I borrowed a fiver out of your drawer", de Vril imagines the culprit saying, "and you act as if somebody ran over your cat."

Despite the carping of de Vril and his like, Maxwell's influence has continued to grow. On the bedroom walls of earnest students in every country of the world you may find posters bearing the following words; a fitting testament to the singular vision and originality of this most idiosyncratic of thinkers:

The very first step towards wisdom will be taken when the most complex form of the single multiformed species confronts the knowledge that all contention is IN-ON, and the reflection of that inherited IN-ON as temporary OUT 1 and OUT 2 matches; and that all conflict is between the contrasted equivalencies of the death-life split of animate-inanimate nature. Wisdom begins and ends with the witness that all twi Twin Inverse effect represents the death-life inverse equity split of universal physical natural law. The artificially accelerated raging battle is between the two equivalent and inherited reverting inversions which assure natural balance to the organism. The culmination of the geological death-life inverse conflict is a one to one ratio for natural order.

Argue with that if you can, you cynics.

This is my favorite part. …

This is my favorite part. Page 341 of THE UNIVERSAL SWEEP OF DEATH <--> LIFE LAW OF NATURE.

"There is often an ambiguous, ambivalent communicative contact which becomes so garbled that there seems to be an endless attempt to communicate with no fruition. The contact, of course, is made:
death <--> life
life <--> death is reciprocally exchanged."

Of course to really understand deeply, one must read the previous 340 pages.

I went through this entry

I went through this entry again to try to understand any of what this book says. I gave it an honest try, but I've got nothing.

No seriously Alfred what in

No seriously Alfred what in the hell

Bernard Shaw once reviewed a play by describing the scenery. Not that I am a Shaw, but one needs to piffle about from time to time, I think.

I'm not talking about your

I'm not talking about your commentary, I'm talking about this madman's insane ramblings. Does it mean anything?? Just trying to read it gives me a headache.

Does it mean anything? There

Does it mean anything? There's a question indeed. I have added a page scan so you are better able to judge.

That doesn't help at all!

That doesn't help at all! What do the slashes mean?? What does it all mean?? MADNESS LIES HERE

Many authors of that era did

Many authors of that era did it through Vantage Press or Philosophical Library - and some were more fun than Maxwell, like the man who "proved" that ALICE IN WONDERLAND is based on Judaic religious concepts.

How wise of Raymond Westbury

How wise of Raymond Westbury Maxwell to publish this book himself, lest some meddling hack copyeditor cloud his meaning.