Fiber Optics: The Eye of Antichrist 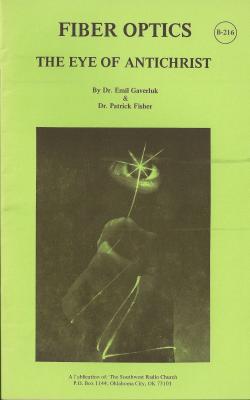 Those of us who exist in a state of shuddering trepidation at the advances of technology will be grateful to Drs Gaverluk and Fisher for making available their analysis of the perils facing mankind. This is a useful addition to the literature which will stand alongside Between Fire and Ice: Is your Central Heating Thermostat Possessed by Satan? and The Abomination of Anti-Lock Braking: The Minions of Beelzezeb Will Take Over Your Automobile and Drive You Straight to Hell!.

The work is a transcript of a radio show in which the eminent scholars discuss both the good and bad aspects of current technologies. They are keen on radio, unsurprisingly, and Fisher, a communications specialist is enthusiastic about the possibilities offfered by satellites to spread the gospel message:

EMIL GAVERLUK: [...] eventually it will be possible for ordinary homes to have a small dish on the roof that could pick up the satellite from there.

PATRICK FISHER: We have these now. There are one meter dishes, costing approximately one hundred dollars, which are able to pick up the satellite signal and bring transmissions from anywhere on the entire globe to your home set right now.

EMIL GAVERLUK: The net effect then is that we already have a satellite system in existence that we can use to preach the Gospel, and reach "billions" of people.

PATRICK FISHER: I am convinced that we have to reach "billions". The number that I find acceptable in my own mind is a conversion rate of one million people per day, nothing less - maybe more, but no less.

Such optimism is inspiring. Fisher's contention is that all that is needed to convert the godless masses of the world is to broadcast the Bible at them. A million a day, easy.

If satellites are A Good Thing, then credit cards are the very work of the Devil. A cunning plan is afoot to bring about the coming of the Antichrist through financial product marketing:

PATRICK FISHER: This is actually a warning. Many people will be "brainwashed" into accepting one new card that is superior to all other cards. Look at your own wallet. Remember the early American Express and gasoline cards that you were once content with? When Master Charge became available, we were told that it was better than other credit cards because it gave us interbank privileges. They are now promoting Visa as being superior to Master Charge for those who travel and would like to combine their hotel costs with their traveling expenses. Basically, we are being "brainwashed" into the acceptance of "one number", since the quantity of our credit cards is slowly being narrowed to one. That number will give access to information concerning every detail of your life from the time you were born to the time you die. Computer programming has become so efficient that a single telephone call from anywhere in Europe, the Middle East countries, or North America, to a bank can now clear your credit rating instantly. I don't know the name of the card we have been discussing, but you will recognize it because it will be advertised extensively. It may even be sent to you free of charge, and you'll be told how convenient it's going to be. I feel that this card is the final step preceding the numbering of people on their foreheads or hands. 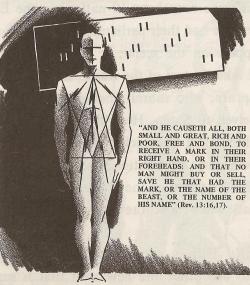 Sign up now for our best ever rate! Call 1800-666-BEAST today and claim YOUR free gift of a mystic number fashion forehead sticker.
Mark of the Beast™ may cause exclusion from the Kingdom of God. Terms and conditions apply.

It is not only credit cards that one has to beware. As the title of the book implies, Fiber Optics are to be employed for the enslavement of humanity:

PATRICK FISHER: I have some magazines giving information on "fiber optics" which are being used to connect the television set in your home to cable TV. This is a much more efficient way to transmit by cable. The advantages of this are that you will get a much clearer picture, and it may even offer you a larger range of programs. The fiber optics cable is in fact a two-way light pipe; at the TV end, it will not only bring, the signal into your home, but there are little pinhead-sized fish eye lenses in the cable which can watch you.

EMIL GAVERLUK: The signal reverses and goes right back through the same pipe, to the source, so that they can monitor what you are doing in your own home.

PATRICK FISHER: They are visiting you in your living-room without your knowledge. The first ten thousand units were built and installed without anyone knowing it, because the lenses are built into the cable. These cables were installed under the false premise that this little lens would allow the set to adjust for differ light levels in your room.

EMIL GAVERLUK: We now have the communications capability to actually watch you in your home with your television set off! I have a sample of that ﬁber optic that I use in my lectures. I put it into my laser beam and it comes out the other end absolutely pure. I have some impure ﬁber optics and they light up on the end, and a lot of material is lost in that. The telephone system in Chicago is already using it in lieu of copper wire because copper is getting scarce and expensive. They can transmit 100 television programs or 100,000 radio programs all at the same time. It not only transmits one way to give you a tremendous variety of entertainment, but it can photograph you in your own home. In other words, people can sit in a transmitting station somewhere and watch you on a monitor. They can ﬂash across and pick out any home they want.

PATRICK FISHER: There is a test installation in a small city just outside Winnipeg in Manitoba. It has a population of about 10,000 people and their domestic cable TVs use a bundle of ﬁber optics. On one a little ﬁsh~eye lens picks up everybody who is in the room where the television set is, and the speaker is already two way. This is a gross invasion of privacy. A person may be 10 miles away in a television transmitting studio, but he can see and hear everything that happens in your room while you sit and watch the TV set.

EMIL GAVERLUK: In other words, one man can monitor a whole city of television sets.

Brrr, chilling. I don't know what you do while you watch TV, but since reading this I've abandoned a number of despicable practices. Those TV eyes won't see anything untoward in my house, oh no.

Emil Gaverluk also predicted that The Rapture would occur in 1981. It didn't. He was still at it in 1988, with his Rapture Before the Russian Invasion of Israel which presumably assigns a later date to this event. As far as I can tell, he is no longer alive so unable to update us with a more accurate timeline. Patrick Fisher did not establish the worldwide Biblical satellite network he was striving for, but hey, we've got Youtube.

In a 1984 world, watching through the telescreens would usually be the most boring job imaginable.

Alfred, I am surprised how

Alfred, I am surprised how many commenters take issue with your reviews.

Keep up the good work.

Better to be argued with than

Better to be argued with than ignored! Thanks for the kind words.

Post-Snowden, how can you

Post-Snowden, how can you make such light of this?

Well this is a post-9/11 world. Obabo has destroyed our privacy. But Donald Duck will make Americer greater againer.

Isn't it post-post-9/11 yet? Must get my epochal calendar serviced.

I am in thrall to the forces

I am in thrall to the forces of darkness, sorry.