How to Be Always Well

For some reason it has been the pattern for those of the early health food and breakfast cereal companies that are still extant to have been created by the combined vision of a pair of men, one a practical businessman and the other a health food nut: Kellogg's was founded by the brothers William Keith Kellogg and John Harvey Kellogg; Ralston Purina was started by William Danforth as Purina Mills and later renamed to capitalise on the success of Webster Edgerly's Ralston Health Club; and William Matthaei, an experienced baker, turned the Roman Meal company originally founded by Dr. Robert G. Jackson into a national success. 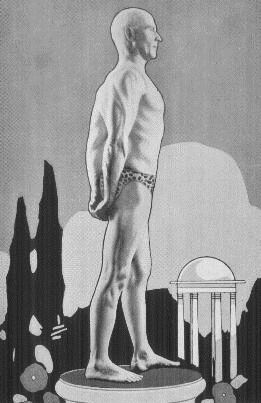 The rather strange illustration at left shows Dr. Jackson, represented like a statue of an athlete in front of an idealised classical landscape. The text printed beneath it in the book reads as follows:-

PHOTO OF THE AUTHOR AS AT 75

The perfection of physique manifested in the above photograph can be attained in and maintained into very advanced life only by living in accordance with nature's living rules plainly written in the wide-open book of nature.

(Whatever Jackson's qualifications as an advocate of healthy living, he was certainly not the world's greatest prose stylist).

Jackson was not a bigoted charlatan like Edgerly nor obsessed with the perils of masturbation like J H Kellogg: he was a trained physician who had cured his own ill health through a tough regime, and who had hence come to believe that everyone else should follow his lead. Born in Edwardsburg, Ontario, Canada in 1865, he was apparently a sickly individual until middle age when he conceived his combination of a diet of “natural foods” coupled with a rigorous program of physical exercise. This approach was so successful that he achieved an undeniably athletic physique and - he claimed - perfect health.

Jackson wrote a number of books in which he set out his philosophy of health, including How to be Always Well. His fundamental idea is that civilization threatens the wellbeing of the human race as unnatural foodstuffs poison the insides, clothing inhibits the proper functioning of the skin and sedentary habits cause the muscles to atrophy. Hence, if you want to be healthy, reject the evils of civilized living and follow Jackson's way to a better life.

Unlike the typical modern diet'n'health guru peddling effortless schemes, Jackson required austerity and commitment from his followers. To illustrate, here is his own daily regimen:

I sleep in an unheated room (unheated at night), year round, windows open top and bottom, bed screened from draft, and wear no night clothes (pyjamas or nightshirt), but always sufficient bed coverings to keep me comfortable. Early morning I throw bed coverings over foot of bed and exercise for a half hour lying on the bed nude, windows still open, as they have been all night, regardless of temperature. Of course, in below zero weather I do not open windows so widely as in more temperate weather, but always they are open top and bottom. After bed exercises I retire to bathroom, open window when it is not frozen too hard to be opened; drink three glasses of water, hot or cold as suits fancy; respond to nature's calls; cleanse teeth; shave, wash, take a second set of exercises standing, designed to exercise fully all the muscles of the body, but especially those about the waist and abdomen; follow with quick, cold bath, taken as follows: Soap parts where odors might be present from accumulations; scrub with well-wrung-out washcloth; wash off soap with sopping washcloth; immerse body quickly for a few seconds, rapidly rotating the body with a side-to-side rocking movement while immersed; stand in tub, wring washcloth and briskly friction the entire body with it, then make it into a tight roll and grasp it firmly with both hands, arms fully extended straight forward from shoulders, hands close together, palms down make very rapid striking movements with both hands, simultaneously moving the whole body by bringing the hip and kneejoints into rhythmic movements with the striking movements of the arms and hands, one hundred times; take four to six deep breaths, exhaling through the compressed lips, and simultaneously raising the arms outward from the sides until they meet overhead during the inhalation, and lowering them during the exhalation; same position, grasping rolled washcloth, arms forward, snap arms sharply to one side, six to ten inches, then as sharply in the opposite direction, oscillating very fast one hundred times; repeat deep breathing.

I then rub my body well with wrung-out washcloth; leave tub and allow body to dry in air or wind through open window while with closed fists I pommel myself from scalp to toes; follow with a quick palm rub over the entire body that can be reached. Regardless of room temperature, I am now glowingly warm and completely thrilled. I dress without underwear, winter or summer, and begin a five-mile walk wearing no underwear, vest, nor overcoat in the coldest weather; in summer as few clothes as the conventions and the law allow. Then I breakfast on fruit and half-and-half or Kofy-Sub (apples, oranges, and grapefruit or the sweet fruits - especially in winter - dates, raisins, figs prunes, or any fruits in season). Lunch is a large bowl of granulated wholemeal porridge (Roman Meal), with milk; or Roman Meal bread with butter, honey (my only sweet with the exception of sweet fruits), and Kofy-Sub to drink; and a large leafy salad with onions, radishes or tomatoes in their season. Dinner is almost always a large salad, as above, with cheese, cottage cheese, baked beans, nuts or nutbutter. Frequently, in winter, I add steamed vegetables, served only with butter and little or no salt. In summer, dinner may be berries and milk only. In winter, if I feel I have over-indulged in food, I may make a dinner of sweet fruits and milk, or nuts and raisins and a cup of Kofy-Sub. I eat no dessert, unless it be a few dates or raisins or the acid fruits.

Occasionally, I live for one or more entire days upon juicy fruits alone, or juicy fruits and half-and-half, to rest and cleanse the digestive tract and the blood, and change the intestinal flora.

“Half-and-half” is half milk and half boiling water; “Roman Meal” and “Kofy-Sub” were both products of Jackson's own company, the former still available, while the latter was a coffee substitute made from roasted wholemeal grains (yum!). This extract is taken from a chapter quaintly entitled My Own Daily “Effort” that means the “Development” of Bodily Perfection.

Jackson suffered from a relatively minor form of crankery in which “what works for me” becomes “the only true way”. Much of his advice, while tending to the extreme, has a kernel of good sense in it, but he could not - or would not - see that most people neither require nor welcome the sort of life he proposed for them. The comforts of civilization, that he termed “sinful”, do not result in most cases in the sort of very poor health that he suffered before he changed his ways. In some ways, he was a very unlucky man, to require the sort of careful regard for his body described above in order to enjoy wellbeing; yet he made sufficient commercial capital out of the foodstuffs he invented to die rich. The mansion he built with his money, “Valley Halla” is now part of Toronto Zoo.

Don't know how your readers…

Don't know how your readers would make it thru life without your carefully commenting on every aspect of the odd books.
Your intense scrutiny of any possible opinion outside of your own is deeply appreciated by all.

best book i know pepole got

best book i know pepole got helty from it

I bought his book in Germany

I bought his book in Germany 50 years ago in the German language and helped me recover from inflammations and gout.

Sounds like a wise man. I would definitely love to read his book.

Hi Leszek, I have a copy of

Hi Leszek, I have a copy of the bookI would like to sell. My email address is gm3456@hotmail.com. Please email me for further details, thanks

I find Dr. Jackson's book a

I find Dr. Jackson's book a revelation and eye opening. Western Civilization is degrading andfacing doom due to departing from Nature.

Hello everyone, I have a copy

Hello everyone, I have a copy of the book I would like to sell. If you would like to know more, please email me on gm3456@hotmail.com.

Hi Everybody
I live in Israel
here is my eMail:
modimodi904@gmail.com
my neighbor Shmulik Leshed turned 104 years
he claims at age 55 he was dead sick including cancer
after reading Dr Robert Jackson book
his life changed
look You Tube. search for his Videos:
Shmulik Leshed 101 Geburtstag feier !!!
and many others
I am also looking for a photocopied book of Dr Jackson
you can download the german book from the internet
but it is pre war german language
even a modern german native speaker can hardly understand it.
I make my own research about his health
There are hundreds of little secrets how to cross 100
what exactly to eat
and what not to eat
Shmulik has a special one organ gymnastic
he never wear shoes but only sandals
he says
drink Coca Cola or eat chicken and you will never get to be 100+
you must harden your body with winter open sea swim
never dry yourself with a towel
sleep; naked with an open window
I will trade Shmulik extensive secrets and Hippocrates unknown health secrets
for a photocopied book of Dr.Jackson
again my Email
modimodi904@gmail.com