Incantation of the Law Against Inept Critics 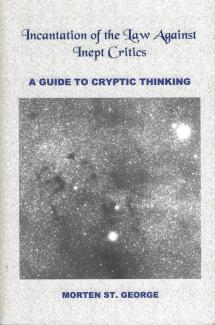 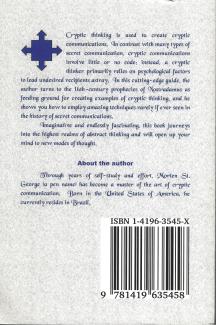 I do like a book that loudly touts an ambition it completely fails to live up to. Many of the works of Webster Edgerly fall into this category, for example, but whether Morten St. George is as much a charlatan as Edgerly is not apparent. Nothing is obvious when it comes to this book or its author, as we'll see.

St. George promises to teach us the art of "cryptic thinking", which he explains is the means by which one may create "deceptive communications".

A few clarifications about cryptic thinking are immediately appropriate. Cryptic thinking concentrates on the creation and deployment of deception devices. For example, a cryptic thinker might use ciphers, such as word ciphers, geometric ciphers, and even date ciphers. I will give you many examples of these. A cryptic thinker does create and use symbols. I will show you how to do this. More fundamentally, however, a cryptic thinker will try to write a passage in such a way that uninformed recipients remain unaware that the passage has no thematic or temporal consistency. This is not particularly difficult to do since the human mind tends to assume such consistency. But how do you then unwind the resulting nonsense? Frequently, cryptic thinking requires a protracted composition, and I will show you how to conceal the unwinding keys in a distant place.

One additional technique is noteworthy. A cryptic thinker may sometimes resort to subtle and rapid oscillations between literal thought and figurative thought. This technique is usually a total knockout for most recipients, and unwinding keys are hard to provide. Here, the cryptic thinker counts on the intuitive genius of the reader to extract the correct meaning, and on the reader's ability to seek and find confirmation signals in other sections of the cryptic work.

Based predominantly on psychological deception, cryptic communications have a special advantage over communications concealed by encoding. The concealed meaning of a cryptic document, or most of that meaning, can often survive literal translation from one language to another. In this book, native to my source material, I exemplify with Latin to French translations but I have found that it works with translations to and from other languages.

So far, so confusing. Morten St. George's unusual technique for teaching how to make cryptic communications is not to start with some plain text and encrypt it but to take something already encrypted and decode it. This would be a justifiable if unorthodox approach if the subject matter was something of his own devising, since at least there could be no argument as to its meaning, but instead he chooses to concentrate entirely on verses taken from the works of Nostradamus, which are of course of uncertain interpretation, to say the least. (Nostradamus is also the source of the rather puzzling title of the book, which comes from a verse exhorting readers to take his work seriously).

This curious switcheroo is not the end of it, though. St. George has other manoeuvres to perform:

The famous seer's book contained 942 astrological stanzas. Out of these, I selected twenty-five for the extensive illustration of cryptic techniques, and an additional fifty for briefer comment on cryptic thinking. To select these stanzas, I envisioned two prose passages in the seer's work as the product of cryptic thinking, and I looked there for stanza pointers. I will scatter examples of what I mean throughout the text. If you doubt that a cryptically selected stanza (essentially, four brief lines of 16th-century gibberish) can be used to convey 20th-century historical events or other specific information, you are underestimating the astonishing power of cryptic thinking. As you will see, cryptic thinking is capable of working miracles.

Toward the end of the book, I insert a series of "challenges" to give you an opportunity to practice cryptic thinking. In each challenge, you become the recipient of an un-deciphered, cryptic message, and your task is to interpret that message. Though heIpful “hints" are provided, many of the solutions require some research as well as familiarity with the illustrations presented earlier.

Had one the power of cryptic thinking to work miracles, perhaps one might be able to figure out what the hell St. George is on about.

To his hodgepodge of stimulants Morten St. George adds a further confounding factor as he presents his analyses of Nostradamus using the mouthpiece of a fictional persona, a smug egotist called "The Master", who is teaching them to an ingenuous acolyte, "Leonora". Here's one of The Master's lessons, where he considers a stanza he claims refers to the Falklands conflict of 1982:

A cursory examination of the first verse raises serious doubts about a connection with the Falkland Islands War, or even with England. Cities of an extraneous region are cited:

Ghent, Brussels, and Antwerp are cities in, what is now, the country of Belgium. During the 17th century this part of the world was in frequent turmoil, thus early interpreters of the prophecies were satisfied that this verse represented those conflicts. Nonetheless, we must note that the armed forces of the cities of Ghent and Brussels, together, never marched against those of Antwerp. Therefore, historically, this verse is inaccurate.

We find a way out of this dilemma simply by looking at a map of Belgium, where we observe that the three named cities form an almost perfect equilateral triangle. From there, we can surmise that this verse aspires to produce an arrowhead pointer: 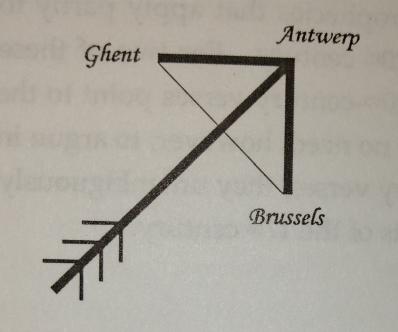 Since the verse states that Ghent and Brussels will march against Antwerp, the angle that represents Antwerp must be the sharp end of the arrowhead, specifying the direction (of the three possibilities) that the arrow points. By following this all around the globe, we arrive at Argentina.

And look: G for Ghent, B for Brussels = GB = Great Britain(!) and A for Antwerp = Argentina(!!). Don't bother yourself that at the time this prophecy was supposedly composed (centuries before Nostradamus wrote it down, The Master reckons) neither Great Britain nor Argentina existed. But there's more:

le sel & vin luy seront a I'enuers,
The salt & wine to it shall be to the inverse,

[...] this verse seems close to incomprehensible. The "luy," to him/her/it cannot relate to the salt and wine. Since these are two separate items, they would require the French plural: "leur." Likely, therefore it refers to the place name of the preceding verse, London. The French "enuers" (from the Latin "inversus") refers to the opposite or reverse side. Thus, we note that London stands at 51.5 degrees north latitude, and at 51.5 degrees south latitude we find the Falkland Islands, Consequently, we must conclude that the “salt and the "wine" refer to those islands. This stanza, however, fails to show us how the terms "salt" and "wine" refer to the Falkland Islands, so we will have to look for the answer elsewhere.

Pour eux auoir le regne en desarroy.
For them to have the reign in disarray.

The French "auoir" means to have or to possess, Thus, the translation of the first few words becomes "to have them" or "obtain them." The "eux," them, has to refer to the salt and wine of the third verse, which, as we have just surmised, must refer to the Falkland Islands. As noted earlier, the word "regne," from t Latin "regnum," can refer to either a government or a country: it is unclear, however, whether the verse is referring to the "regne" of Great Britain or that of Argentina. We alluded to both countries in the first verse. Argentina wanted "to have them", thus seized them, and Great Britain wanted "to have them" back.

The Falkland Islands War caused “disarray” in Argentina. Because of his failure to hold on to the islands, the Argentine President fell from power. In England, there was "disarray" of another type. Prime Minister Margaret Thatcher, then the least popular Head of State in many years, with her grand triumph in that war became extremely popular and won reelection the following year.

Leonora, at least, is impressed, and thinks the Master "clever in the way [he goes] beyond what the words themselves have to say." I can't help thinking of Lewis Carroll's Humpty Dumpty when reading such passages.

As mentioned earlier, the original source of the prophecies is supposed to predate Nostradamus. In brief, it's aliens. Why they were, centuries ago, so preoccupied with the Falklands War (and, in passing, the marriage of Prince Andrew to Sarah Ferguson) is a great mystery, but apparently:

MASTER: [...] the odds of everything I've shown you being sheer coincidence are greater than the number of stars in the known universe.

Who could argue with that? Even if, after reading this book, you haven't learned much about how to write cryptic communications - which after all is the province of ancient aliens and not really to be tackled by mere lummocks such as ourselves - at least you'll know that, according to Morten St. George, Nostradamus called Margaret Thatcher a "dame antique" or - as The Master puts it - an "old bag".

End the year with a review…

End the year with a review from ours truly!
Thank you, Alfred! Happy new year!

I rather enjoy cryptic texts…

I rather enjoy cryptic texts (like the Voynich Manuscript, perhaps the greatest cryptic work ever made) and expected something in this vein. But it's just about reinterpreting "prophecies." Pretty lame. Also, Argentina didn't exist when Nostradamus was around. I have to say that arrow interpretation must have taken quite a lot of finagling, though.

He has opinions about…

He has opinions about Voynich, too. https://manuscrit-de-voynich.com/voynich-americas.html
All comments