It was with some scepticism that the public looked at copies of Hitler's Last Year of Power on the bookstalls all over the country when it appeared at the end of August of this year.

"Hitler's Last Year of Power!" This they said was one of the many predictions which are made each year and which are never fulfilled, which only serve the purpose of making money for the publisher and bringing discredit upon the science of astrology. 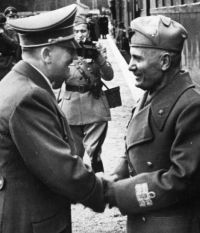 Thus Leonardo Blake begins the preface to the second edition of his predictions for Hitler, published at the very start of what would become the Second World War. Despite his confidence in the accuracy of his prognostications, it would be the sceptics at the bookstalls who would be proved right, as these brief extracts will show:

Blake also averred that Mussolini would break with Hitler and join the Allies against him.

No matter how wrong Blake was, though, the "science" of astrology remains just as reputable and exact today as it ever was, that is to say, not a bit.

(For more Mussolini mentalness, see The Cardinal's Mistress. And another Hitler misfire can be found in What's Ahead).

So Alfred... general comment here: how do you feel about all these crackpots coming out of the woodwork to defend the books you laugh at? Is this entertainment or just sad? Did you expect this at all? I find it quite bizarre, puzzling, and sad. But at the same time, it *is* entertaining, in a perverse sort of way.
Submitted by Alfred Armstrong on 05 Nov 2009 - 10:42 Permalink

It doesn't surprise me

It doesn't surprise me Francois. I've been getting emails along the same line for years. Some of the books on here sold quite a few copies so there's obviously an audience for them.

It is a bit strange that the flat earth brigade are still so active though.

As for entertainment value, I reason that if the writers of these books are a fair target then those of their readers who pop up to defend them must surely also be. But as someone else said if we could turn idiocy into energy we could solve all the world's problems in an instant.